Home » Lifestyle » From ABBA to cattle fencing: how virtual became the real deal

Virtual is the new real. Thanks to the grand disruption, kids are throwing virtual birthdays, drinkers compete in virtual quizzes, and students attend virtual lectures – or send their avatars in proxy.

Or make that ABBAtars, in the case of a certain supergroup. Last month, the Swedish quartet announced intentions of a virtual tour featuring their virtual selves singing genuinely new material. Knowing Me, Knowing You – to quote the gang – is as likely to happen across the ether as it is IRL nowadays. 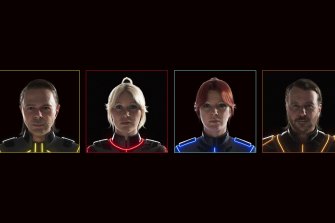 The “de-aged” ABBA as they will appear as their virtual selves in their virtual concert experience ABBA Voyage.Credit:Industrial Light & Magic

In real life? Virtual is so close to authentic you can touch it. Besides, modern life offers few alternatives. Onlife – the neologism to recognise our online existence – embodies the extent of digital immersion. It’s everywhere; it’s real; and it is what IT is.

Modern church is vurch – or virtual church – while festivals run virtual panels, as we gather on Friday for virtual drinks. Or virtual gatherings, since those drinks had better be real. There are some things we won’t relinquish.

Yet how did virtue become virtual, asked reader Alexia Holyoak. Is a person’s grace linked to cyberspace? Essentially, the answer taps into essence, a word that’s been under scrutiny in recent columns.

Virtutem in Latin means good character. Digging deeper, we reach the root of vir – or man. Skewed, I know, for such a unisex concept as virtue, but let’s stick to the case. After all, Elizabeth Bennet displays far more virtue than her broody squire in Mr Darcy, so let’s identify the Latin man as the universal human.

Either way, your goodness is deemed an inner quality, your essence in a sense. That notion was reinforced in the 1400s, when the pious descriptor of virtuous spawned its cousin in virtual, retaining the idea of essence without necessarily the rectitude.

Where virtuous spoke of one’s saintly traits, virtual alluded to anything else’s core quality, be that good or bad, human or inanimate. In a history of Bengal, written in 1813, the author Charles Stewart characterised the spread of the English language as a virtual conquest of that state. Photographic pioneers in the same era exalted in a daguerreotype’s virtual image.

Actual now had its counterpart in virtual, the oak-matured bourbon verses the Clayton’s. As good as, but not quite is.

In Roget’s lists, virtuous remained in place as the antonym of vicious, just as actual now had its counterpart in virtual, the oak-matured bourbon verses the Clayton’s. As good as, but not quite is.

Extended into adverb, that distinction becomes clearer. If virtually every school-leaver will struggle to find a rental, this translates as pretty much the entire cohort – all but the whole shebang, just as virtual is all but the real. Close but no e-cigarette.

Mind you, that same adverb is as likely to distinguish how life in 2021 operates, socially and professionally. Telehealth services are delivered virtually, in league with the court’s online sessions, where nearness implies a fair fistful of the original. Utah Jazz, the basketball franchise of Salt Lake City, offers fans a virtual locker-room experience, presumably minus the Reebok reek.

We see virtual from within the home to those places that we visit electronically, from virtual reality to virtual communities. Clouds offer virtual storage, just as your junk-room is now your virtual office.

It inspires Alexia Holyoak to add: “I’m almost 80 years old and I’ve never come across ‘virtual’ used in such a way.” And so widely too. As collared cattle heed virtual fences, former spouses seek virtual visitations to connect with their kids via webcams. Finally, to go the full virtuous circle, there’s even virtual volunteering on offer, a chance for online charity workers to blend their old-school virtutem with a bit of virtutem 2.0.