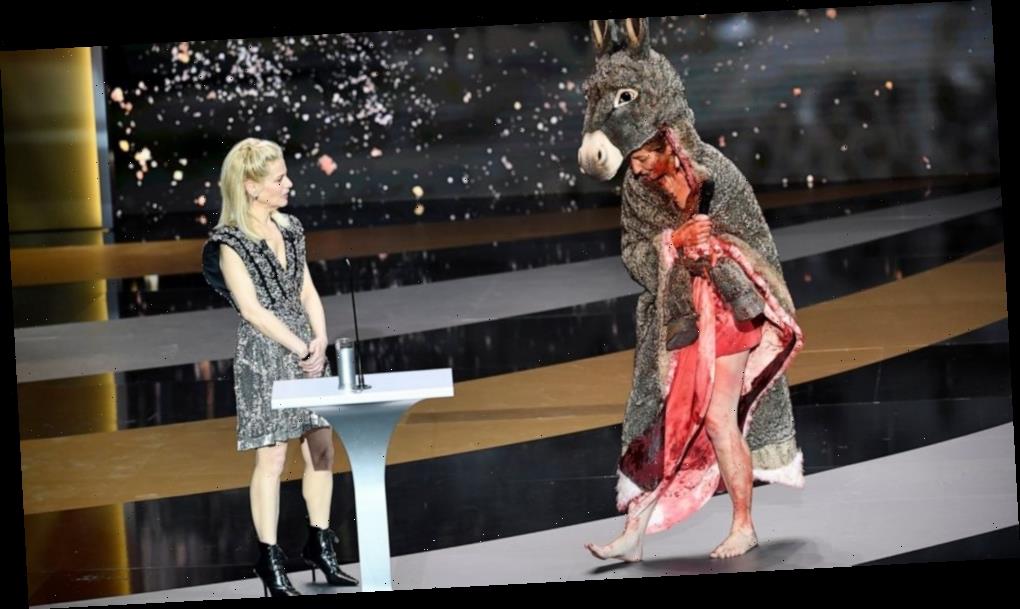 The ceremony announcing the winners of this year’s Cesar Awards, France’s equivalent of the Oscars, included a loud cry for culture in the age of the coronavirus, with one actor stripping naked onstage to make a statement about the continued closure of cinemas and theaters.

“Is that too trash?” Masiero asked the socially distanced audience before removing the donkey costume to reveal what looked like a blood-soaked dress and announcing “I have a last one.”

Masiero, 57, the offbeat star of popular detective series “Capitaine Marleau,” then took off the dress and exposed messages written on her body. The words on her front read, “No culture, no future.” The message on her back was addressed to French Prime Minister Jean Castex: “Give us back art, Jean.”

The audience applauded, but some commenters on social media denounced what they said was a descent into vulgarity at the 46th Cesar Awards.

The #MeToo movement roused last year’s ceremony, where famed director Roman Polanski received best director award for “An Officer and a Spy” amid protests by women’s groups and some boos and walkouts.

Polanski, who did not attend the event, is wanted in the United States decades after being charged with raping a 13-year-old girl in 1977. He pleaded guilty to unlawful sexual intercourse with a minor but fled the U.S. In 2019, a woman accused Polanski of raping her in 1975 in his Swiss chalet when she was 18. Polanski denied the allegations.

Culture Minister Roselyne Bachelot was the subject of numerous jokes. The ceremony’s the emcee, actor and comedian Marina Fois, noted the minister’s planned book containing recipes, ”little comforting things to get through this crisis.”

“I’m losing confidence in you,” Fois said, holding a plastic bag representing dog feces. The minister’s entourage said the book, “La Vie en Rose,” will not be coming out, according to French media reports.

As for the awards themselves, one film, “Adieu les Cons” (“Bye Bye Morons”), the madcap adventure of a dying hairdresser looking for the child she gave up at age15, scooped up seven awards, including best film and best director for Albert Dupontel. The best actor award went to Sami Bouajila for “Fils” (“Son”) and Laure Calamy was chosen best actress for her performance in ““My Donkey, My Lover, and I.”

Jean-Pascal Zadi, who was named most promising actor for his role in “Tout simplement noir” (“Simply Black”), promoted equality in his thank you speech. Fourteen-year-old Fathia Youssouff, chosen most promising actress for “Mignonnes” (“Cuties”), told aspiring youth to follow their dreams.