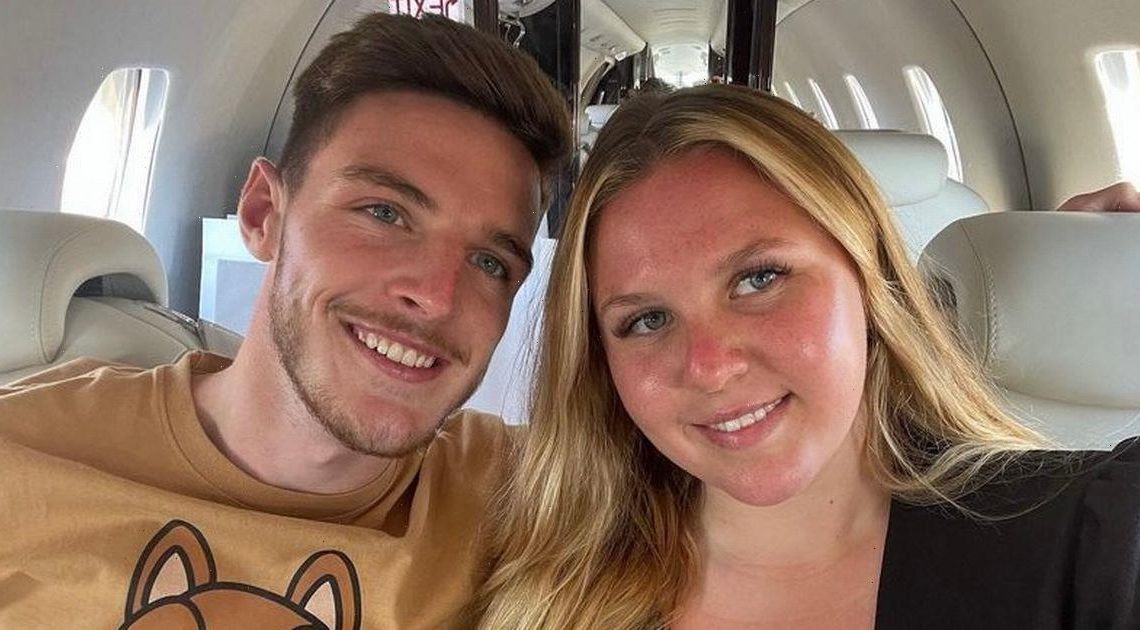 Declan Rice has reportedly welcomed his first child with his long-term girlfriend Lauren Fryer, with the West Ham United ace debuting a new tattoo which looks to feature his baby son's name.

The 23 year old showed off the new inking during West Ham's match against Brighton & Hove Albion on Sunday 21 August.

The sweet tattoo, which wraps around the circumference Declan's forearm, appears to have the name of his baby – a little boy named Jude – and his date of birth: 07.08.2022.

England footballer Declan and blonde beauty Lauren have been together for six years and first met while at school.

Many of the Declan's teammates are also still dating their childhood sweethearts, including Jack Grealish, Harry Kane and Jordan Pickford. Let's take a look…

England captain Harry Kane has known his now-wife Kate since he was a child, and the pair attended school in London’s Waltham Forest together.

Harry, 29, officially started dating fitness instructor Kate in 2011 and she witnessed his "crazy" rise to fame first-hand over the years.

Speaking to Esquire, Harry previously said of Katie: “We went to school together, so she's seen my whole career. Of course, she's finding it a little crazy. I think she's even been in the papers a couple of times taking the dogs out.”

Later that same year, Harry got down on one knee during a holiday to the Bahamas and asked Kate to be his wife and she excitedly accepted.

The loved-up pair welcomed their second child in August 2018, a baby girl named Vivienne, and in 2019 Harry and Kate tied the knot in a stunning ceremony held abroad.

Manchester City ace Jack Grealish has been dating model Sasha Attwood for around 10 years, with the pair first meeting while studying at St Peter's Roman Catholic Secondary School in Solihull as teenagers.

Jack, 26, and Sasha, also 26, kept their romance out of the spotlight for many years, but when he was thrust into the limelight during the 2020 Euros, the pair's relationship also hit the headlines.

Sasha, who was scouted by a modelling agency at the age of 13, revealed that she received hundreds of death threats during the Euros in a heartbreaking YouTube video.

The couple, who have been hit with cheating rumours in the past, now occasionally share a glimpse of their romance on social media with loved-up photos from fun days out or lavish holidays.

Earlier this year, Jack also revealed that he hopes to tie the knot one day. “My mum and dad are married, so of course I want to do that,” he told The Face.

He also added: “I know it’s easy to say, but the goal for me is just to be happy, man. I think that’s the most important thing in life.”

Another Manchester City ace who is still dating his childhood sweetheart is Phil Foden, who is in a relationship with Rebecca Cookie.

Phil, 22, and Rebecca, also 22, are believed to have got together during their teenage years, but the pair keep their relationship entirely out of the spotlight.

Rebecca and Phil welcomed their first child, a baby boy named, Ronnie in January 2019, who was named after the footballer’s boyhood nickname.

In April, the couple announced that they were expecting their second child, a daughter, who was due in late summer or early autumn 2021. Neither have publicly announced the arrival of their baby girl.

Become an OK! VIP and get all of our exclusive interviews, videos and stunning photo shoots sent straight to your inbox every week!

You'll receive an email with stories exclusive only for OK! VIP members, including celebrity house tours, baby reveals, wedding snaps and so much more!

Harry Maguire married his childhood sweetheart Fern Hawkins earlier this year, with the couple throwing an epic bash in France to celebrate.

The Manchester United player, 29, started dating Fern, also 29, over 10 years ago with the pair's anniversary falling on 19 June 2011.

In February 2018, Harry proposed to Fern during a romantic getaway to Paris, and the WAG happily announced the news afterwards on social media, writing: "Harry made me the happiest girl in the world and asked me to marry him in the most perfect way."

In April 2019, the pair's first daughter, Lillie Saint, was born, followed by their second daughter, Piper Rose, who arrived in May 2020.

Earlier this year Harry and Fern tied the knot in an incredible star-studded ceremony held at the Chateau de Varennes in France, with fellow footballers including Jack Grealish and Jordan Pickford in attendance.

Kieran Trippier married his long-term girlfriend Charlotte back in 2016, just one year after they reportedly got engaged.

The 31 year old, who plays for Newcastle United, shares three children, including Jacob, five, and Esme Rose, two with Charlotte, with their youngest child being born earlier this year.

The mum-of-three tends to keep out of the spotlight in contrast to other footballers' wives, but she does regularly share snaps on the joint Instagram account she shares with her sister Rosie Wray. The sisters run @styleupsisters, where they post snaps of their family life and outfits.

Everton goalkeeper Jordan Pickford married his childhood sweetheart Megan Davison earlier this year, with the pair tying the knot in an intimate ceremony out in the Maldives.

Jordan, 28, and Megan, 26, started dating when they were teenagers and have remained together ever since, with the blonde beauty continuing to support her beau throughout his football career.

Megan, who graduated from the University of Sunderland in 2020, can regularly be found cheering Jordan on from the sidelines.

In February 2019, the couple welcomed their first child together, a baby son named Arlo George, who frequently features on their social media profiles.

Manchester City ace Kalvin Phillips is in a relationship with Ashleigh Behan, who he met back in 2011.

Kalvin, 26, started dating brunette beauty Ashleigh in 2013 and the couple have remained together ever since.

Little is known about Ashleigh and her personal life, but she and Kalvin regularly share loved-up snaps together on social media, with the duo enjoying lavish getaways.

Earlier this year, she shared a gushing tribute to her beau after he signed for Manchester City. Ashleigh wrote: "So proud of you @kalvinphillips!

"I’ve been so fortunate to be able to watch Kalv through every stage of his career so far and reach the goals he has set himself which has been an unforgettable journey at Leeds United, one that I’m so thankful to have been a part of.

"Now to watch him take this next step to continue chasing dreams that he has so rightfully earned, I’m so excited to continue to watch you grow as a footballer and a person!!! Excited for the future baby!!"

Manchester United player Marcus Rashford announced his engagement to his long-term girlfriend Lucia Loi earlier this year, after popping the question in romantic setting out in Los Angeles.

Marcus, 24, tends to keep his romance with Lucia out of the spotlight, but the pair are believed to have been dating for over nine years now.

Lucia is a business graduate who studied at the University of Manchester and she's previously been spotting in the stands supporting her beau at matches.

Student makes $100,000 selling Furby creations straight out of your nightmares