Seven people were arrested after fights broke out between supporters and opponents of President Donald Trump in New York City on Sunday. The clashes came after a Jews For Trump convoy of hundreds of cars draped with American flags and Trump 2020 banners rolled slowly through Manhattan and Brooklyn on Sunday afternoon.

The caravan traveled from Coney Island to the Trump Tower in Manhattan before heading to a rally in a Brooklyn park. Videos shared on Twitter showed several protesters pelting the vehicles with eggs or stones, snatching flags and shouting insults.

CBS New York reports one Trump supporter wearing a red hoodie jumped out of his vehicle after a counter-protester allegedly taunted the man’s daughter, who was with him. Fists started flying and one fight led to another.

Some people were seen with bloodied faces. One person had to be taken away in a stretcher. 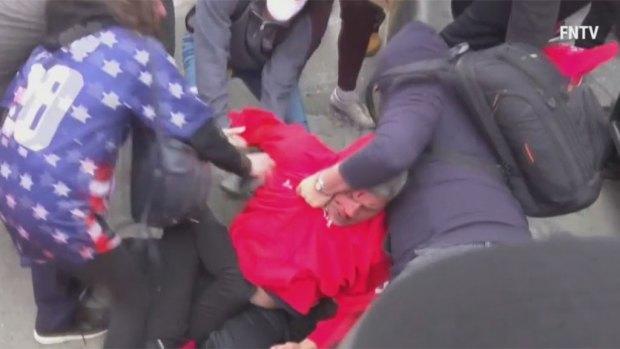 In one video showing physical fights between several people, police officers detain an unidentified man and protesters chant “let him go.” Another video showed a small group of people throwing objects from a Brooklyn highway overpass at vehicles bedecked with Trump flags.

This incident is currently being investigated by the @NYPD84Pct Detective Squad. @NYPDShea @NYPDnews @NYPDTips pic.twitter.com/p8Ok4T2rN9

According to the Jews For Trump website, Sunday’s rally was intended to show solidarity with “the beleaguered Red Zone community,” a reference to the coronavirus hot spots designated by New York Gov. Andrew Cuomo as areas where schools and nonessential businesses must close to prevent the spread of the coronavirus.

The rally follows weeks of tensions in Brooklyn’s Orthodox Jewish neighborhoods over the coronavirus restrictions. Heshy Tischler, a City Council candidate and leader of Brooklyn protests against the restrictions, promoted Sunday’s car parade on Twitter.

Boris Epshteyn, an adviser to the Trump campaign and co-chair of Jewish Voices for Trump, organized Sunday’s rally in Brooklyn’s Marine Park at the end of the car parade.

Meanwhile,  an NYPD officer was suspended and under investigation after video surfaced of him saying “Trump 2020” over a bullhorn while in a patrol car. CBS New York reports videos, allegedly taken in Flatbush, Brooklyn, were posted on Twitter on Saturday night.