‘Feral’ Ben Quilty draws on pain to recover a lost past

Artist Ben Quilty was compelled to create his latest work while making a pilgrimage to a sacred site for the Gundangara people. He and his 13-year-old son Joe had been visiting a waterhole in the Southern Highlands regularly when one day Joe pointed out a plaque that read, People have been enjoying this place for the past 150 years.

Gundangara women had in fact been visiting for between 60,000 and 80,000 years, making the long trek across the Blue Mountains to the south coast of New South Wales, arriving in time to give birth. 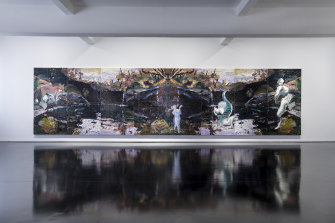 The centrepiece of Quilty's new show, opening tomorrow at Tolarno Galleries, is a response to that sign. Called 150 Year, Rorschach, it’s almost 9 metres wide and while it depicts the beauty of the landscape, it is covered in feral animals – a cat, a toad, a fox and a goat. "In a sense I see myself as one of them," he says.

He is driven to point out this erasure, "that callous deletion of the history of who we actually could be if we were willing to acknowledge the truth".

"I just think if we acknowledge these things we’ll be a much richer place. While we don’t, I’m an anxious person. I feel that we live on very contested ground and our claims to the Western tradition being so strong are absurd."

The piece is an extension of his massacre series, about the need to recognise the many sites at which Indigenous people were killed by white settlers. "In other parts of the world, and in Port Arthur for example, there are important memorialisations … A lot of those places are in the very most beautiful natural places, where there was water, where there was shelter. Families were camped, living at these places when they were attacked … it was just a very powerful way of making landscape paintings and indulging in the beauty of the places we live in but also really indulging in the dark history of those places." 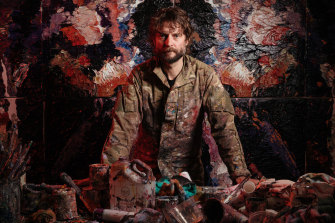 “If they were white people there would be serious memorials and a lot of money spent on them. But they’re not and we continue to ignore them – at our peril."

The title refers to Hermann Rorschach, famous for his inkblots test, a pioneer of mental health medicine. "There are parts of our community who are paranoid and delusional about facing up to the responsibility of dealing with the truth about our country," says Quilty. "In a sense these paintings are a play on me and my audience … We need to reassess and acknowledge the history and the loss and pain and suffering."

Much of his work is autobiographical, not that he intends it to be. It is also therapy, “for everything” he says. “I feel bulletproof as long as I can be in my studio.” 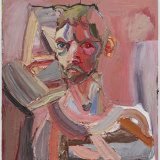 There are parallels between the Rorschach work and Home, a book of drawings by Syrian children Quilty published in 2018. “If we had open eyes we could hear about these very similar stories,” he says.

He recalls the Howard government giving numbers to refugees, and then calling them asylum seekers. “The less we can sense someone’s humanity, the less chance we have of showing that person compassion … What those children wanted was for us to think about them and understand their lives. For me that’s the core role of art in our society – of music and film and theatre and the visual arts – to remind each other about humanity.”

I tried every doughnut at Tim Hortons, and ranked them from worst to best