Father quoted £20,000 to build outdoor kitchen does job himself

Father quoted £20,000 to transform his garden builds a pergola, BBQ kitchen and decking area for just £7,000 after learning DIY on YouTube

A father-of-two has transformed his garden with a stunning pergola, BBQ kitchen and decking area for just £7,000 – after he was quoted £20,000 by builders for the project.

Matthew Johnson, 33, a business development director from Kent, was given the  whopping building estimate for a decking area – with additional features – in his garden.

The DIY novice decided to construct the space himself and, after watching YouTube tutorials, and using free design software trials, he set about buying the wood he needed.

He went on to transform the space into a stunning pergola, deck and BBQ area for around £7,000, a third of the quote he got. 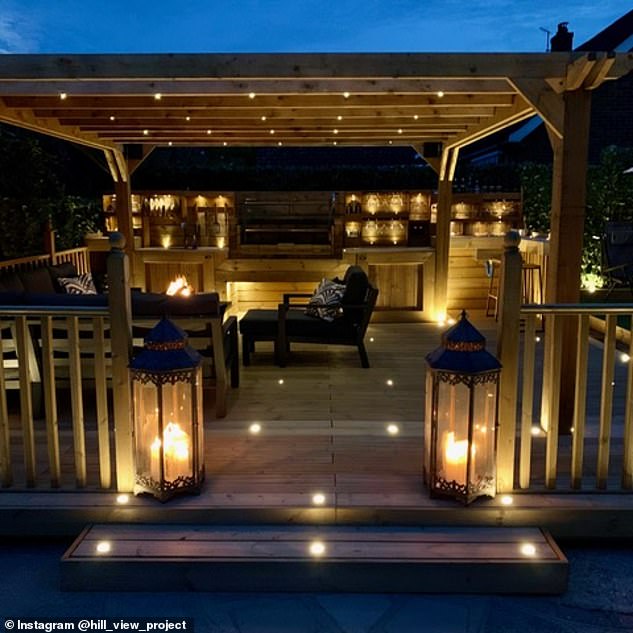 Matthew Johnson, 33, from Kent, wanted to transform his back garden into a BBQ kitchen area with seating and a pergola – but was quoted £20,000 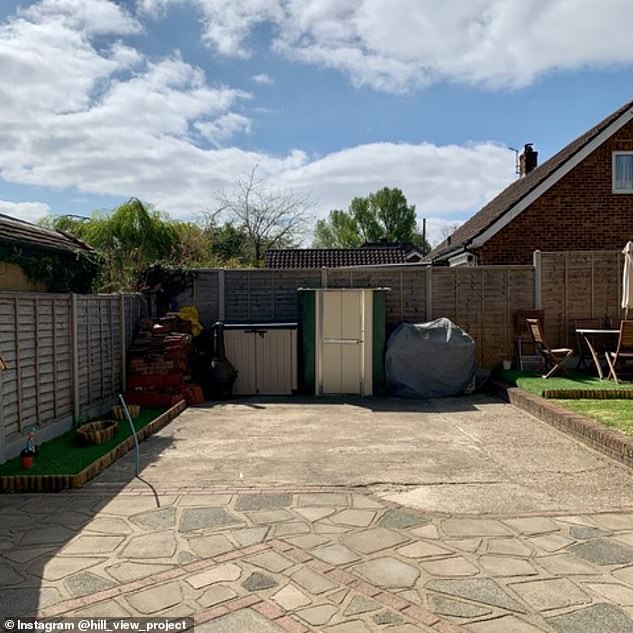 Matthew, who shared his renovation on Instagram at @hill_view_project, told money-saving community LatestDeals.co.uk: ‘I originally came up with the idea after we went on holiday to Spain one year and there was a beautiful BBQ area that we sat at every night.

‘The BBQ was built using a three-sided brick wall and sat on top of a countertop and I thought for something so simple, this is a dream to cook on!

‘Fast forward a year and I was missing it so I got on to YouTube and started searching for how to build a DIY BBQ.

‘I could not believe the amount of content there was available that would historically only be in the mind of tradespeople and now I have on-demand video tutorials showing step-by-step what to do. 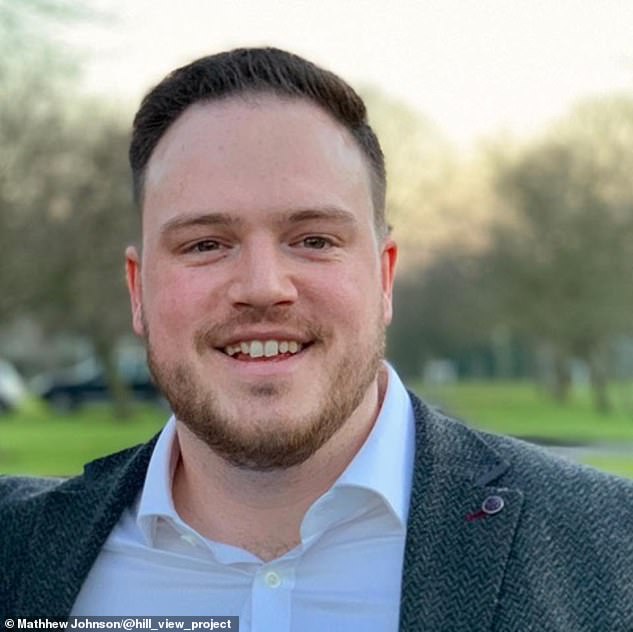 Matthew told Latestdeals.co.uk about his innovating DIY project which involved watching lots of Youtube tutorials and spending a fortune at the wood yard

‘After watching a few hours of these videos my confidence grew because, actually, what they are showing isn’t very difficult once someone explains to you how to do it.

‘I noticed that lots of these DIY BBQs were sat on decking and so before I knew it I was searching for “how to build a deck” and “DIY decking ideas”.’

‘I then knew I had to build a level frame, with joists every 400mm and to drill decking boards to it with a 5mm gap – it was that easy!

Armed with this knowledge, Matthew realised he could also research how to build a pergola. Having done so, he initially took to Powerpoint to design his creation but then found some software online to make his job easier. 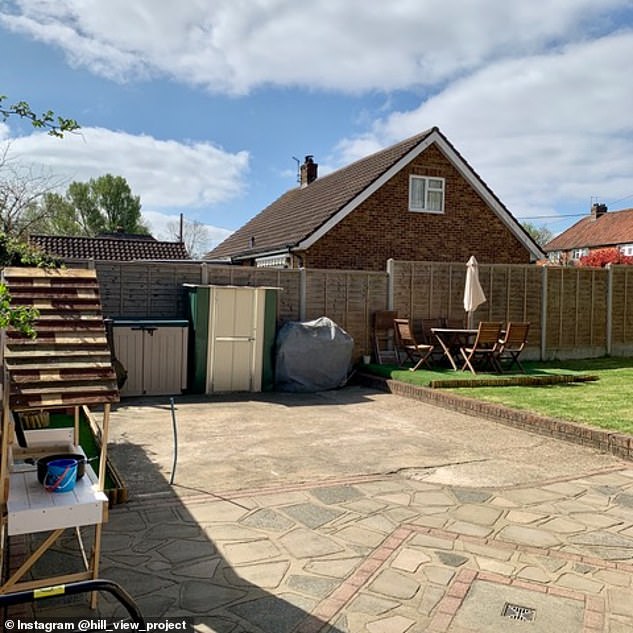 Matthew said homeowners would get the ‘bug’ once they realise that a lot of DIY is ‘quite doable’. Pictured: The garden as it was before the transformation 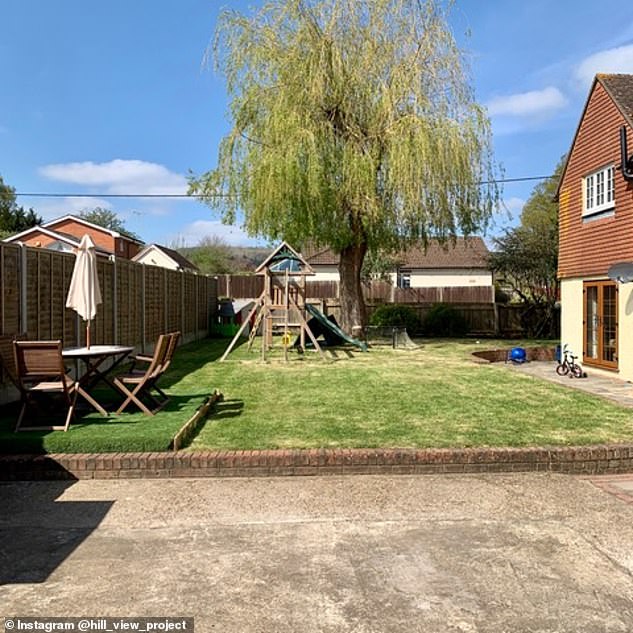 Matthew said that his project kept him busy during the coronavirus lockdown and gave him a sense of achievement. Pictured: The garden as it was before he transformed it

He ended up designing the deck, pergola and BBQ himself and creating for himself and his family an outdoor kitchen.

The ingenious father also worked out a way to plumb in a water heater in the cupboard he built on his new deck so he could have hot water outside.

‘I tried to be as resourceful as possible and always visited the wood scrap pile before picking up another piece of wood,’ he added.

‘I had to spend a little more than planned simply due to the number of incorrect cuts I made as an ambitious amateur. 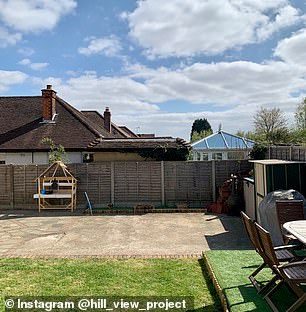 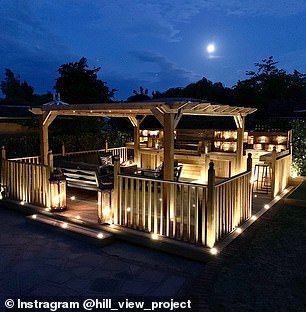 Matthew said he spent nearly £2,300 on wood and then the rest went on wiring lighting, plumbing, fixings, the BBQ, bar accessories, the sink, tap and hedge screening (left, before, and right, after) 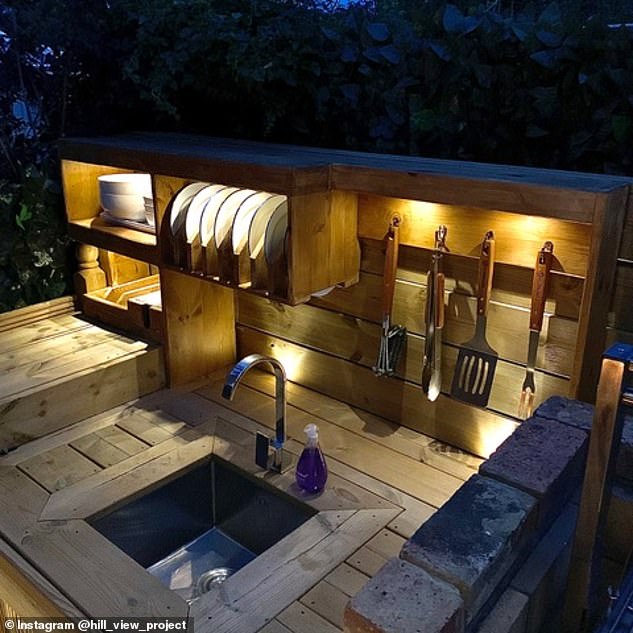 ‘The scrap wood and off-cut pile was almost as big as the deck at one point! In total, it cost around £7,000, significantly less than the cost of paying someone to design and do the work.

‘If we had to pay someone else to do it we would be looking at about £20,000 or so for the cost of design, labour and materials.

‘I spent £2,290 for the wood, then the rest of the money went on wiring, lighting, plumbing, fixings, the BBQ, bar accessories, audio bits, sink, tap, hedge screening and a few other bits.

‘I sourced the wood directly from the timber yards locally. It took a lot of calling and emails to get hold of the 6×6 posts and the QDeck decking boards but I managed to get them sourced and delivered. 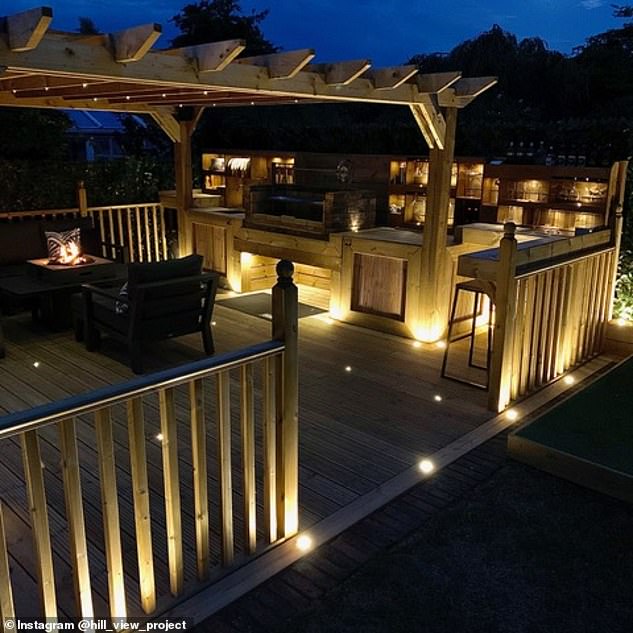 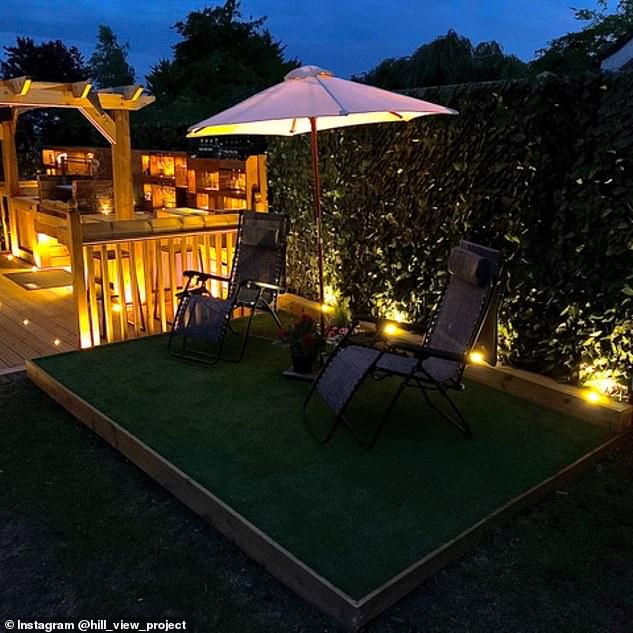 ‘It felt nice getting them from local timber yards too as opposed to the big chains. The prices were way more competitive and they were able to deliver.’

He revealed: ‘Now that’s it’s done I genuinely feel incredible about it! We’ve spent so many afternoons and nights out there and it’s totally changed the function of our garden.

‘Where there was once a derelict unsightly and unloved concrete slab now stands a beautiful place for us to relax and make happy memories with friends and family.’

Matthew said that it is worth trying to do home improvements yourself even if you’re not a professional, adding: ‘It sounds obvious, but have a go!

‘I think the days of wholly depending on the knowledge of tradespeople are finite. 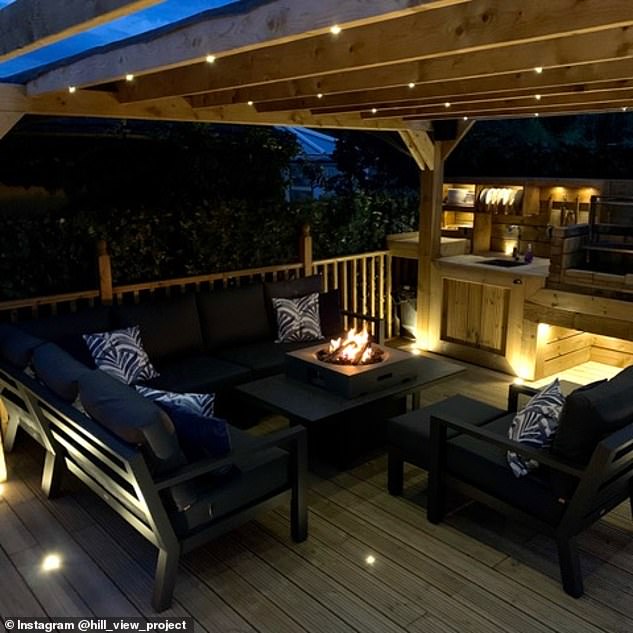 ‘There’s so much now that you can learn from blogs and online content such as DIY forums and YouTube that you can pretty much learn to do or get instructions on anything, subject to having the right tools to hand.

‘But why not invest in some tools and make it a reality? It’s all right there on demand.

‘Once you do have a go and you realise that actually, some of these jobs are really quite doable, then you’ll get the bug and want to do more.’

The father added that the project gave him something to focus on during the coronavirus lockdown earlier this year. 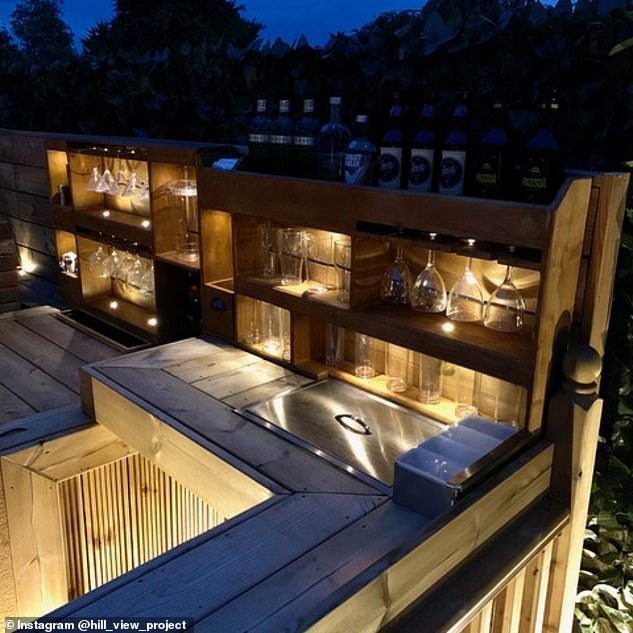 Go for it: The budding carpenter said that it is worth trying to do home improvements yourself even if you’re not a professional

‘This project has been really helpful in lockdown to help give me something to focus on,’ he said.

‘The way my mind works, I have to be able to point my creative energy at something.

‘Due to COVID-19 a lot of my contracts had stalled and been pushed back so I had to have something to keep me busy and give me the same sense of achievement.

‘My mental and physical health is better, the value of our house has increased as a result – I’m waiting to find out by how much! – and my social life has been amazing now that we can finally have a space to host. 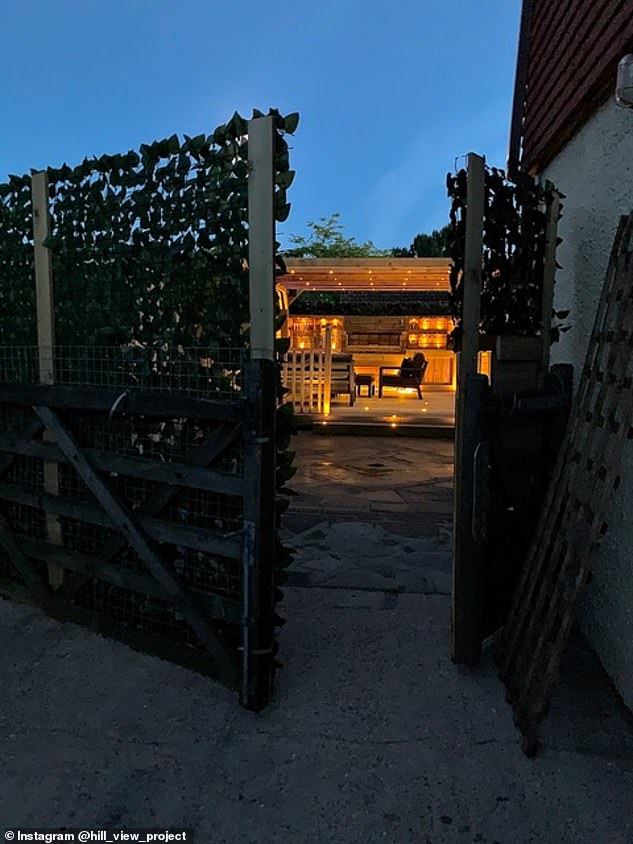 ‘It was also nice to have a break from the phone too as I wouldn’t check it while I was working.

‘Absolutely everything you need to learn, design, purchase, and research is available online and with most companies now offering extended delivery services it made it a lot easier getting goods delivered once they were eventually in stock and available.’

Tom Church, co-founder of LatestDeals.co.uk, comments: ‘While £7,000 is certainly a pretty penny, it’s practically a third of what building this incredible outdoor entertaining space would have cost if Matthew had employed an outside company to do it!

‘As Matthew says, there are infinite resources online for free, whether design software or YouTube videos, from which we can learn how to build everything from a dining table to a whole garden pergola.

‘By doing this himself, Matthew has saved himself a huge amount of money, given himself a creative outlet during the lockdown – and most importantly, ended up with the garden of dreams!’

Strictly stars face being DISQUALIFIED if they test positive for Covid