Home » Lifestyle » Father and daughter get high together on High Society: Cannabis Cafe Father and daughter get high together on High Society: Cannabis Cafe

A father and daughter healed their tense relationship in an unusual way by getting high together on last night’s episode of Channel 4’s High Society: Cannabis Cafe.

Jeff, 55, and his daughter Abbey, 30, both from Birmingham, admitted they regularly clash over her smoking the drug, which she uses to help manage symptoms of several chronic health conditions.

But after travelling to Amsterdam and trying out marijuana together in a coffee shop, they started discussing their difficulties, with Jeff welling up as he told his daughter she made him feel like he was ‘not loved’.

As the pair reconciled, viewers were impressed by the heart felt moment, with one saying: ‘Father and daughter finally opening up to each other is beyond sweet.

‘You can see the depth of their relationship and that they can speak about their eggshell moments is brilliant. 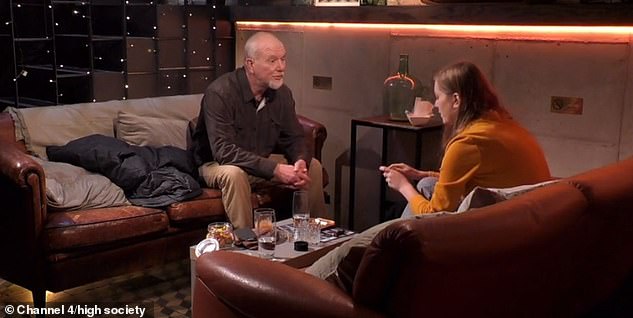 Viewers praised the frank and honest discussion that Jeff, 55, had with daughter Abbey, 30, about their fraught relationship after they smoked cannabis together

‘I hope they relaxed more around each other, they’re brilliant.’

Having arrived at the cafe, Abbey talked her father through the menu, and he admitted he was feeling apprehensive about trying weed. 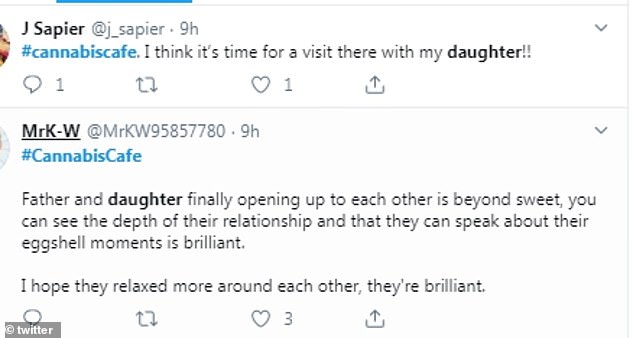 Viewers were impressed by the heartfelt moment, with one saying you could see the ‘depth’ of the pair’s relationship

She went on: ‘I can’t remember the last time we spent three days together.

‘We normally last half an hour. If we do any longer than that it normally goes t*** up.

And while Jeff said he’d rather drink a pint than smoke, Abbey revealed she used cannabis for medicinal purposes, as she had fibromyalgia and hypermobility.

Fibromyalgia, also called fibromyalgia syndrome, is a long-term condition that causes pain all over the body, while hypermobility means joints are more flexible than other people’s, which can often cause pain or stiffness in the muscles. 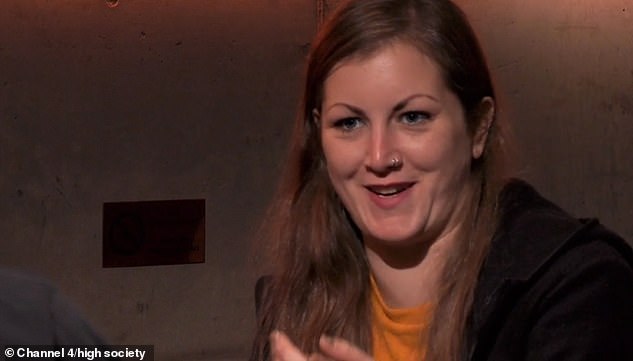 Abbey explained: ‘I’m waiting for hip surgery. I actually have a lot of chronic conditions.’

‘I’ve been diagnosed with Ehlers-Danlos syndrome which is a connective tissue disorder. I don’t produce collagen correctly, so as part of that, my gut doesn’t work properly. I have an over active bladder.

Abbey added: I’ve been listed for quite an invasive hip operation, and then I’ll have a long recovery – perhaps 12 months to get back to normal.’

She went on to explain that because of her hip surgery, she was facing moving back in her mother and father, and said she was eager to make sure her father understood how important cannabis was to her. 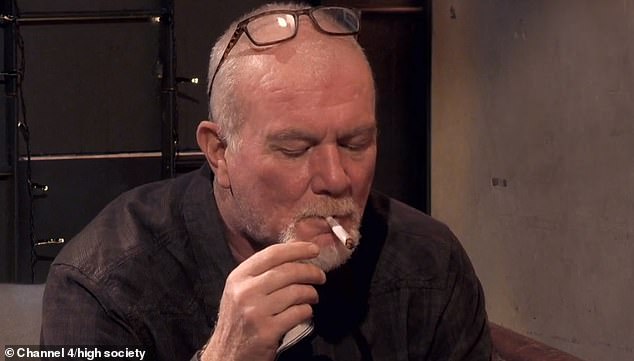 The pair smoked cannabis together as part of the Channel 4 show, and ended up discussing their tense relationship

Rolling up a joint of cannabis, she explained: ‘I wouldn’t normally roll a joint in front of dad, because I do respect that it’s your home.’

Abbey admitted: ‘I don’t think my dad fully understands my condition. He feels I use them as an excuse.’

‘If I can just get her down on the same level, it could only do us good.’

IS MEDICAL CANNABIS LEGAL IN THE UK?

Medical cannabis will be available on prescription in the UK after it was approved by the Government in July 2018.

Doctors will be able to prescribe medicine derived from marijuana ‘by the autumn’, the Home Office announced.

Home secretary, Sajid Javid, said: ‘Following advice from two sets of independent advisors, I have taken the decision to reschedule cannabis-derived medicinal products – meaning they will be available on prescription.

‘This will help patients with an exceptional clinical need.’

Mr Javid added it is ‘in no way a first step to the legalisation of cannabis for recreational use.’

This comes after he granted an exceptional licence for Alfie Dingley, six, and Billy Caldwell, 12, to use cannabis for their epilepsy.

Possession of the class B drug will still carry an unlimited fine and up to five years in jail, while dealers face 14 years in prison.

He added: ‘Abbey and I are very similar, that’s why we clash so much. We’ve got too many genes the same.

Having smoked a spliff each, Jeff told his daughter: ‘You make me feel like you’re not loved.

‘Whenever I see you I just feel like you’re waiting to have a fight.’

Abbey said: ‘I didn’t know you felt like that.’

Tearing up, Jeff went on: ‘I have to stand on egg shell when you come round. I’m frightened to upset you.’

And the pair discussed her upcoming operation, with Jeff’s eyes welling up as he told his daughter he wished he could ‘swap places’ with her.

Taking her hand, he went on: ‘You’re gorgeous, you’re beautiful and you’re our daughter. You can come home and stay with us as long as you want. Forever.’

Viewers praised the moment, with one begging Abbey to reach out and hug her father.

One tweeted: ‘The girl from Brum needs to give her dad a hug.’

Another said: ‘I think it’s time for a visit there with my daughter!!’

And while viewers praised the coffee shop online, they responded: ‘One of the best things about our coffee shop is the sheer diversity of ages and people who visit us.’