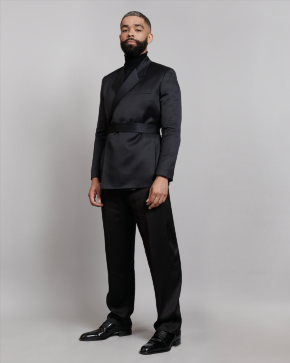 Cannes’ newest stars will shine Friday night, when British actor Kingsley Ben-Adir and Irish actress Jessie Buckley will be honored with this year’s Tropheé Chopard. Jessica Chastain will present the two with the prestigious prize ahead of a gala dinner at the Majestic hotel.

Chopard has partnered with the festival since 2001 for the emerging talent award. Copresident and creative director Caroline Scheufele reflected on the history of the prize. “Each year, we award two young talents and give them a kick-start, this is Chopard’s way to support cinema,” she told WWD. “With actresses like Florence Pugh being nominated for an Oscar the year after being awarded the Trophée Chopard and Marion Cotillard winning her Oscar four years after our trophy, I would say our prize is a good predictor of great things to come.”

Buckley has already been nominated for two BAFTAs, including a nod for her starring role in last year’s “Wild Rose.” She also counts “Judy” and “I’m Thinking of Ending Things” among her film credits, as well as TV series “Chernobyl” and “Fargo.”

Ben-Adir, who starred in “High Fidelity” and as Malcom X in “One Night in Miami,” is joining the Marvel Universe’s “Secret Invasion” series.

Cotillard and Pugh are just two of the stars among the previous winners; Diane Kruger, Shailene Woodley, and Anya Taylor-Joy are among the women winners, while Hayden Christensen, Gael Garcia Bernal, James McAvoy, Joe Alwyn and John Boyega have taken home the men’s award.