Australia’s charge into large-scale wind and solar is faltering, with investment in new projects drying up and construction jobs in the industry diving.

Figures from the Clean Energy Council for the second quarter of 2021 reveal three new projects across the country reached the financial commitment stage, the equal second-lowest number for any quarter since the start of 2017. 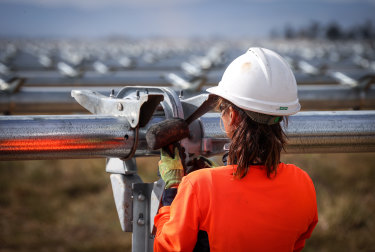 Construction jobs are shrinking in the large-scale renewables sector.Credit:Bloomberg

By capacity, those new projects will add 432 megawatts, or about the size of one coal-fired power station unit. That generation amount was almost one-third down from the quarterly average of 2020, or 70 per cent down on the 2018 average, the industry group said.

Solar energy, which recently became the second-largest source of electricity in the National Electricity Market after coal, continues to prop up renewables. Since 2020, commitments for new solar farms amount to 2600MW. Over the same period, investors have brought one wind farm to financial close, with 203MW of capacity.

Kane Thornton, the council’s chief executive, said the slowdown and job cuts were “a significant loss for the Australian economy”.

“Investment in clean energy has fallen to levels not seen for several years as a result of the increased risks facing investors, including from grid connection and network constraints as well as the ongoing unpredictable and unhelpful government policy interventions and market reforms,” Mr Thornton said.

The large-scale renewable energy investment figures come in a week when the Intergovernmental Panel on Climate Change’s latest report has renewed attention about the need to decarbonise economies everywhere if dangerous planetary warming is to be avoided.

Prime Minister Scott Morrison and Energy Minister Angus Taylor both spoke out about their government’s determination to depend on “technology not taxes” to cut carbon emissions.

Mr Taylor said the council had made seven claims over the past two years that investment was collapsing “and they have been wrong every time”, noting the numbers excluded rooftop solar.

When small-scale solar is added, installation of new capacity will remain strong at between 5.5 and 6 gigawatts even with COVID-19 restrictions.

“This would continue to be amongst the highest per capita installation rates in the world,” Mr Taylor said, or a similar amount as added during the six years of the most recent Labor government.

“The world’s climate emergency is Australia’s jobs opportunity, an opportunity that Scott Morrison is turning into rubble,” Mr Bowen said. “Their energy chaos of 22 energy policies in eight years and a refusal to join 70 per cent of our trading partners in decarbonising by 2050, has sent shockwaves through the investment community.”

Greens leader Adam Bandt said the only technology the government was backing was coal and gas.

“The government has attacked every pro-renewables program that the Greens and Labor set up in shared power Parliament, and now we’re seeing the cost,” Mr Bandt said.