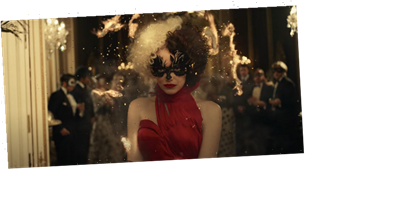 In 101 Dalmations, Cruella de Vil was the main villain, a fashion-obsessed tyrant who would stop at nothing to forge the coat of her dreams. But how did she come to covet the fur of sympathetic Dalmation puppies, or resort to animal cruelty and criminal activity in the first place? Disney’s Cruella, starring Emma Stone, will answer that question in a Joker-style origin story.

Cruella’s style is the centerpiece of the movie’s first trailer. It is set in 1970s London, during the punk rock and Vivienne Westwood era; now, her signature dual hair coloring and heavy black eyeliner make more sense. But she’s a world apart from punk’s common people ethos — Cruella, nèe Estella’s sartorial ambitions are reflected in her flamboyancy, her thirst for power, and a touch of madness.

Emma Thompson also stars as the main antagonist, an icy baroness in the vein of Miranda Priestly. Her fashion gatekeeping is quickly knocked aside by Cruella’s theatrics — at a masquerade, she sets herself on fire to reveal a knockout red gown that stuns the crowd of posh elites. It is a moment.

Backed by a haunting rendition of “Who’s Sorry Now?” by Connie Francis, it quickly becomes apparent that Cruella is sorry, not sorry. Twitter users were equal parts enthralled and bemused by the trailer, with some hoping that Westwood herself would make an appearance. You can watch the trailer below.

Carol Klein: How she transformed a field at her Glebe Cottage home into beautiful garden

What are vaccine passports and will I need one for my holiday?
Entertainment