Dr. Patricia Bath, 76, Who Took On Blindness and Earned a Patent, Dies

Patricia E. Bath, an ophthalmologist who took a special interest in combating preventable blindness in underserved populations and along the way became the first black female doctor to patent a medical invention, a laser device for treating cataracts, died on Thursday in San Francisco. She was 76.

Her daughter, Eraka Bath, said Dr. Bath had died after a brief illness.

Dr. Bath was an educator and researcher as well as a physician. She began her medical career in New York and in 1974 joined the faculties of the University of California, Los Angeles, and the Charles R. Drew University of Medicine and Science in that city.

When she was just out of medical school, working as an intern at Harlem Hospital and then at an eye clinic at Columbia University, she noticed discrepancies in vision problems between the largely black patient population at Harlem and the largely white one at Columbia. Her observations led her to document that blindness was twice as prevalent among black people as among white people — findings that instilled in her a lifelong commitment to bringing quality eye care to those who might not otherwise have access to it.

In the early 1980s, her work with cataract patients and related research led her to envision the device that became known as the laserphaco probe, which uses laser technology to remove cataracts, which cloud the lens of the eye.

“When she first conceived of the device in 1981, her idea was more advanced than the technology available at the time,” according to a biography of Dr. Bath in Changing the Face of Medicine, an online exhibition of the National Library of Medicine that spotlights women in medicine. “It took her nearly five years to complete the research and testing needed to make it work and apply for a patent. Today the device is use worldwide.” 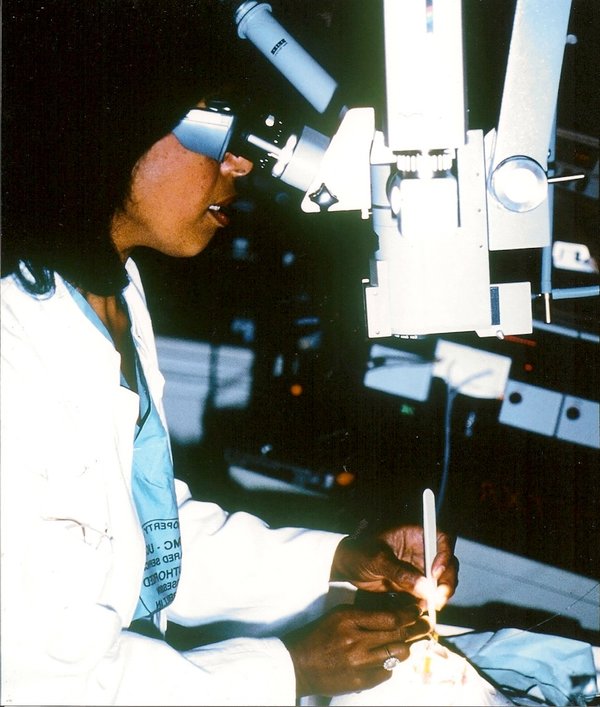 The United States Patent and Trademark Office, which has singled out Dr. Bath’s achievement several times over the years, said in a 2014 news release that the device had “helped restore or improve vision to millions of patients worldwide.”

By the time her patent for the device was approved in 1988, Dr. Bath was well along in her quest to bring eye care to people with limited access to health care. In 1976 she was a founder of the nonprofit American Institute for the Prevention of Blindness, along with Alfred Cannon, a psychiatrist, and Aaron Ifekwunigwe, a pediatrician. The organization has promoted what Dr. Bath called community ophthalmology, which advances optic health through grass-roots screenings, treatments and education.

In an interview for the Changing the Face of Medicine exhibition, Dr. Bath described her “personal best moment”: using an implant procedure called keratoprosthesis to restore the sight of a woman in North Africa who had been blind for 30 years.

“The ability to restore sight is the ultimate reward,” she said.

Patricia Era Bath was born in Harlem on Nov. 4, 1942. Her father, Rupert, an immigrant from Trinidad, was a motorman for the New York City subway system. Her mother, Gladys (Elliott) Bath, worked as a housekeeper and, Dr. Bath often said, sparked her interest in science by buying her a chemistry set when she was a girl.

“I wanted to pretend-play and model myself after scientists,” she told Time magazine when it included her in its “Women Who Are Changing the World” project in 2017. “When we would play nurse and doctor, I didn’t want to be forced to play the role of the nurse. I wanted to be the one with the stethoscope, the one who gave the injections, the one in charge.”

She was a top student at Charles Evans Hughes High School in Manhattan, now closed, and at 17 she was featured in The New York Times along with another teenager, Arnold Lentnek, after a cancer study they had helped write was presented at the International Congress on Nutrition in Washington.

She studied chemistry and physics at Hunter College in Manhattan, earning a bachelor’s degree there in 1964, and received her medical degree at Howard University in Washington in 1968. She then returned to New York to do an internship at Harlem Hospital and a fellowship at Columbia, setting the stage for her insights into the racial disparities in statistics on blindness and her proposals for community ophthalmology.

“Disproportionate numbers of blacks are blinded by preventable causes,” Dr. Bath wrote in a 1979 paper in the Journal of the National Medical Association. “However, thus far, no national strategies exist for reducing the excessive rates of blindness among the black population.”

After Dr. Bath relocated to Los Angeles, she became the first woman on the faculty of the department of ophthalmology at the Jules Stein Eye Institute at U.C.L.A. She was, she said, offered an office in the basement next to the animal laboratory.

“I didn’t say it was racist or sexist,” she said. “I said it was inappropriate and succeeded in getting acceptable office space.”

In conducting her research for the laserphaco probe, Dr. Bath took a sabbatical in Europe in part, according to the exhibition biography, to escape racism and sexism in the American academic and scientific worlds. Even when the device succeeded, her achievement was not universally celebrated.

“There was not acceptance,” she told Time, “and in some instances there was anger that petite moi, little me, had indeed shattered the glass ceiling, had a scientific breakthrough.”

In addition to her daughter, Dr. Bath is survived by a brother, Rupert, and a granddaughter.

Drawing on her own experiences, Dr. Bath became an advocate for math and science education for girls, and for removing the kinds of blatant and subtle barriers she had encountered. Just two months ago, she testified before a Senate Judiciary subcommittee in Washington at a hearing entitled “Trailblazers and Lost Einsteins: Women Inventors and the Future of American Innovation.”

In her testimony she recounted instances of discrimination, like finding that her research had not been credited to her. She urged the lawmakers to bolster science and math education, beginning with very young children.

The ultimate goal, she told Time, was to level the playing field so much that a career like hers would not be the exception, and that any young woman with such interests could succeed.

“The narrative of surprise — it has to change,” she told the magazine. “I realize that when I achieve these things it helps what other women, and other people of color, black women, can do. But keep in mind: I never had any doubts.”