Home » Lifestyle » Do the Married at First Sight UK couples fly on their honeymoon trips together? 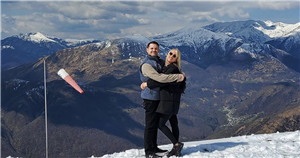 Do the Married at First Sight UK couples fly on their honeymoon trips together?

Fans of Married at First Sight UK will be overjoyed that the extreme dating show is back, with sixteen singletons volunteering to get hitched to a complete stranger, all in the name of love.

Over the past week and a half, we've seen six couples matched up by the E4 show's dating experts, with some hitting it off better than others.

After their wedding day, the newlyweds are whisked off on a romantic honeymoon, with destinations varying from the Maldives and Mexico to Switzerland and even one in the Lake District?!

Marilyse Corrigan and Franky Spencer were the only contestants who didn't get flown out for a sunny trip, which bugged the show's viewers.

Fans joked on Twitter than the show had "clearly run out of honeymoon budget" as the fitness-obsessed couple were treated to an outdoorsy Cumbria holiday.

However, they seemed to love it, as did all of the other couples with their own breaks, despite their fair share of squabbles and disagreements.

Some of the trips, such as Amy Christopher and Josh Christie's jaunt to Antigua, meant they had to embark on very long-haul flight.

But do the couples head out on holiday together, or are they kept separate? We reveal all we know…

Do the Married at First Sight UK couples fly on their honeymoon trips together?

Some of the MAFS UK honeymoon destinations were incredibly far from Britain, with certain spots such as Nikita Jasmine and Ant Poole's Mexican resort taking upwards of an 11 and a half hour flight from London.

The Dominican Republic and even the swanky Maldives were also offered up to the show's stars, meaning they had to prepare themselves for a long time up in the air.

As for whether or not they are alone? Tuesday night's episode seems to have revealed that they do not flying solo.

The show doesn't film or air any of the couples' journeys to and from their honeymoons, which seemingly leaves the fans guessing on how exactly it is organised.

But as Amy and Josh headed off honeymoon, the pair were shown having a conversation about their long ten-hour flight.

Josh was annoyed at his new bride for keeping him awake throughout their journey to Antigua, expressing that he wasn't amused by her touching his leg to wake him up every time he started dozing off.

Amy claimed that she was just trying to have a chat with him, and she was bored all alone on the flight with no one to speak to, but Josh was not impressed.

We don't blame her – a ten-hour flight is no small feat, especially when your new husband doesn't want to talk to you!

Whatever Happened To The Cast Of Scrubs?