Labor has attacked the federal government’s unveiling of a major upgrade to military bases in the Northern Territory, saying it is a rehashed announcement of a project and $300 million over budget.

Prime Minister Scott Morrison will on Wednesday announce the $747 million spending package on four key training bases in the top end and expanded war games with the United States. 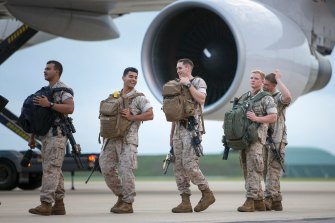 US Marines embark an aircraft at RAAF Base Darwin for their return home.Credit:ABIS Kayla Hayes

The package includes the lengthening of an airstrip to support larger aircraft, an overhaul of firing ranges and new training facilities set up for Australian defence personnel and US marines.

According to AusTender documents, the Prime Minister’s announcement is for upgrades confirmed two years ago in a closed tender, which estimated the works to be $447 million. The government has not said how Wednesday’s announcement differs in scope from the original plan outlined in May, 2019, which predated its 2020 Defence Strategic Update.

The Morrison government has also been facing criticism from Labor and national security experts for multibillion-dollar blowouts in the future submarine and future frigates programs.

The opposition’s defence spokesman Brendan O’Connor called on the government to explain why Wednesday’s announcement was “almost half a billion dollars” over the estimate budgeted in 2019.

“Our troops and their capabilities are let down by a series of delays and blowouts, whether it be the $40 billion blowout on Future Submarines, $10 billion on Future Frigates, or today’s rehashed announcement,” he said.

“The project is two years behind schedule, costing jobs that could have supported Territorians through the pandemic.”

The Prime Minister said the Northern Territory announcement would maximise local jobs through a “targeted ­industry plan to contract local businesses throughout the entire supply chain”.

“Working with the United States, our allies and Indo-Pacific neighbours, we will continue to advance Australia’s interests by investing in the Australian ­Defence Force, particularly across Northern Australia,” Mr Morrison said.

“Our focus is on pursuing peace, stability and a free and open Indo-Pacific, with a world order that favours freedom.

The announcement comes days after Home Affairs secretary Michael Pezzullo warned the “drums of war are beating” and Defence Minister Peter Dutton said a war between the United States and China over Taiwan could not be discounted.

Mr O’Connor said the project was committed to before those comments “that use language that is neither sober or cautious about our regional settings”.

Michael Shoebridge, director of the Defence program at the Australian Strategic Policy Institute, said he welcomed the move from the government to begin talking about the increased probability of war in the coming years. But he said he would prefer Australian officials name where the threat is coming from and outline what the government is doing to deter potential adversaries.

“In all this discussion about Australian statements about whether there will be a military conflict over Taiwan, I think a lot of this discussion has missed an obvious point: the source of the tension,” he said.

“And the source of the tension is the Chinese state under President Xi Jinping and its use of the People’s Liberation Army in the South China Sea, the East China Sea, the Indian border and across the Taiwan Strait.”

How To Take Care Of A Monstera Plant
Entertainment