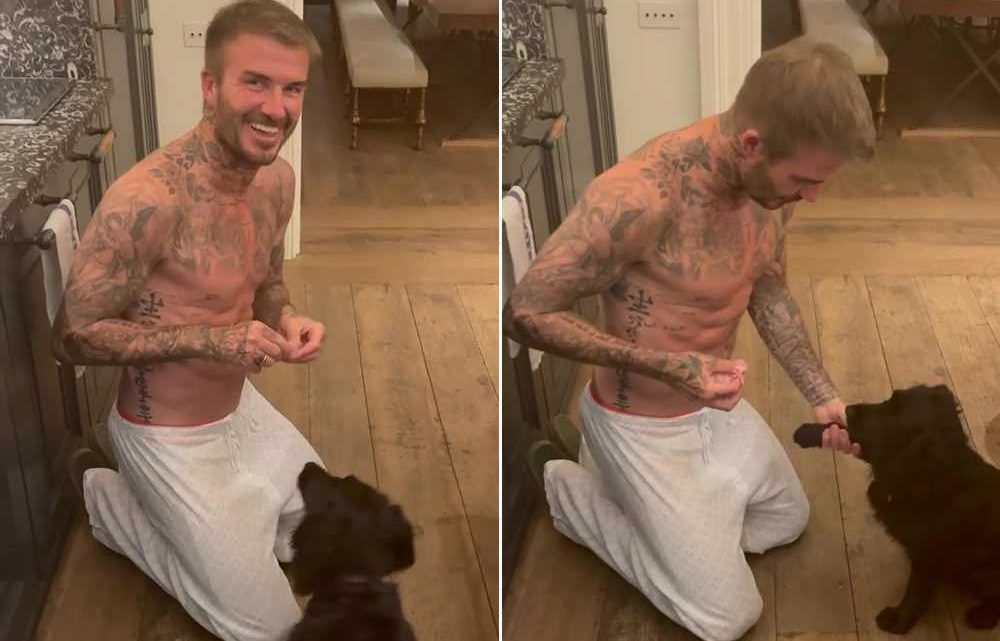 Best star snaps of the week: Hugs and kisses XOXO

David Beckham showed off his fit physique while training his puppy Fig in a video posted to Instagram on Monday.

“All we do in lockdown is high five and eat #figLovesHighFives 🐶,” the former soccer player, 46, captioned the post.

Beckham went shirtless in the video, displaying his ripped six-pack abs as well as his many tattoos on his arms, chest and torso. He donned a white pair of sweatpants and green flip-flops.

“Give me your paw,” he said in the clip as he held a treat for his pup.

The dog proceeded to enthusiastically present his paw before trying to snag the food, which appeared to be some sort of cold cut.

Several fans commented on the post to lust over the athlete’s flaming bod.

“Yeah no one’s looking at the dog David 😉😂,” one person commented.

“so jealous of this dog right now 😢❤️😂❤️🔥,” another netizen wrote.

“Dog? What dog?” added another.

This isn’t the first time Beckham has posted a training video with Fig. He previously shared a clip of himself trying to teach his dog how to present his paw in May, though the dad of four was, unfortunately, wearing a shirt at the time.

And in another video, Beckham gave cookies to all three of his pooches.

The muscled dog lover shares his pups with wife Victoria Beckham. They are also the parents of four children: Brooklyn, 22, Romeo, 18, Cruz, 16, and Harper, 9.