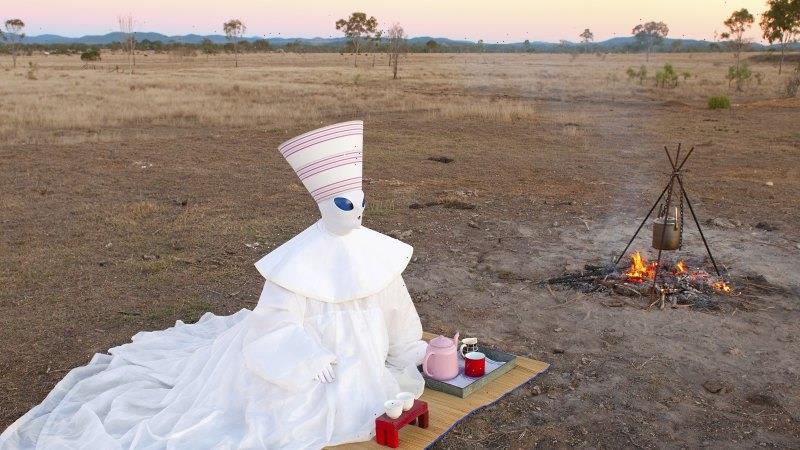 Dark Mofo to blow up dead Tasmanians in Derwent fireworks

Hobart’s Dark Mofo will put First Nations artists at the heart of its festival next month, as it tries to make amends for commissioning an artwork that offended some Indigenous people and triggered a significant backlash and threats of a boycott.

But the festival still plans to push the boundaries, with a spectacular public ritual where the ashes of deceased Tasmanians will be launched in fireworks to explode over the Derwent. 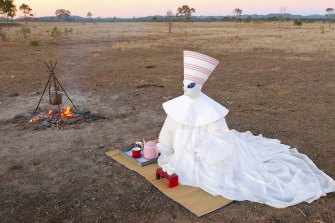 Pope Alice will appear at the 2021 Dark Mofo festival.

In April creative director Leigh Carmichael had promised to listen and engage with Aboriginal and Torres Strait Islander people, after the festival was accused of stepping over the line with Union Flag, a proposed work by Spanish artists Santiago Sierra that would have soaked a British flag in the donated blood of First Nations people.

Participants will “follow fire and smoke [on] a street through our town retaken by vegetation” and the program says the “list of artists grows as individuals come forward to own the project”.

As part of an apology for the Union Flag debacle, Carmichael had vowed a”more culturally significant program” for future festivals.

Dark Mofo’s after-hours “art path” through central Hobart will feature Home State nipaluna, an installation described as “the first traditional hut of this kind built since the colonial invasion”, which will represent “the story of Country: a place of mourning and community… filled with stories and voices, objects and visitors” from a growing list of artists.

Carmichael said the cancellation of the festival in 2020 had left his team and artists “disoriented, confused and with a sense of loss”.

The “dark night of the soul” journey that many went on, he said, had given a context for this year’s festival, and “we pray it brings a glimmer of light in these uncertain times”.

The theme is “Come to the Cross”, a Christian phrase that’s a favourite in gospel songs and evangelical preaching, tying together imagery of suffering and salvation.

The usual Winter Feast, Ogog-ogoh sculpture burning and Nude Solstice Swim will feature in the festival.

Art events this year include Memorial by Alex Podger, a world premiere “spectacular public ritual that invites Tasmanian residents to have the ashes of their loved ones placed into a handmade firework shell, to be launched above Hobart’s Derwent River”.

There will be a major public exhibition about convict artist Thomas Wainewright, and the Cathedral venue will be occupied by Pope Alice, the performance art persona of Luke Roberts who has been manifesting the figure for decades.

At Mona, the Crone exhibition features a flock of animated portraits of ageing women. Downtown, Russian performance duo 404.zero will premiere a “great chamber of light and body-shaking vibrations” and Jonathan Schipper’s Slow Room is a living room being slowly pulled into a hole in the wall.

The music part of the festival is headlined by post-punk legend Thurston Moore, founder of Sonic Youth, who will performer with long-time collaborator Wobbly and New Zealand band The Dead