Brexaggerate: To exaggerate the consequences of Brexit, for better or worse.

‘Apparently, there’ll be only cabbage and rice available after October 31st.’

‘On the contrary, a speedy Brexit will ensure that every man, woman and child will be able to drive to the finest restaurants in their shiny new Rolls-Royces.’

Brexample: A random instance, with no basis in fact, dropped 12 minutes into any discussion of Brexit. ‘For Brexample, it’s a well known fact that under forthcoming EU rules, all footballs will have to be square, and all swimming pools drained of water, to prevent drowning.’

Brexasperation: The terrifying suspicion that creeps up on one in the early hours of the morning that exactly 30 years from now the headline will read: BREXIT: THE DEBATE CONTINUES. 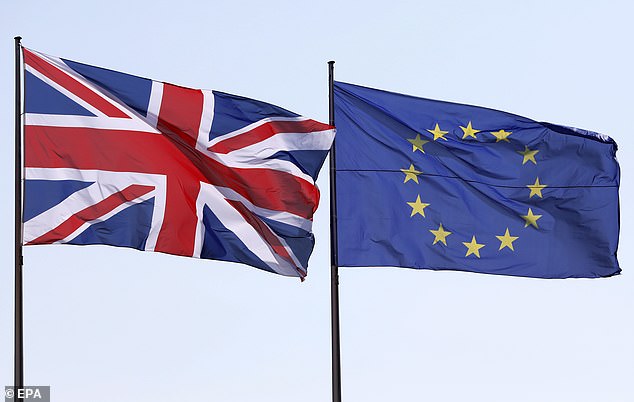 Brexample: A random instance, with no basis in fact, dropped 12 minutes into any discussion of Brexit (file image)

Brexcalibur: The mythical sword of King Arthur, imbued with magical powers of prosperity and national pride.

Brexclusion Zone: Area of a home or office in which people are banned from talking about the EU, how-ever much they yearn to.

‘The other day, Lucy was about to express a strong opinion about the backstop. I had to remind her that she was in the Brexclusion Zone. So she said: “OK, fine” and rabbited on about Love Island instead.’

Brexcursion: The chance to get away from it all to a distant land where Brexit is never mentioned. Sadly, no Brexcursions are available for at least ten years.

Brexhaustion: The state of being completely tired out after too many Brexit discussions on television and radio. ‘Are you going to stay up to watch Tom Watson debate Dominic Raab on Newsnight?’ ‘No, I’m going to bed now. To be honest, I’m feeling utterly brexhausted.’

Brexhibitionist: Person dedicated to attracting attention to himself or herself by standing outside Parliament waving flags and wearing funny hats and screeching shrill slogans through megaphones.

Brexistentialism: A philosophical theory emphasising the primacy of the individual, free to collar people at parties and bore on and on about WTO, the Norway option, No Deal and the backstop.

Brexmoor pony: A short, sturdy pony, native to the British Isles, known for its ability to stand steadfast against competing demands for a hard or soft Brexit.

Brexpenditure: The vast sum already spent on saving money by leaving the EU. 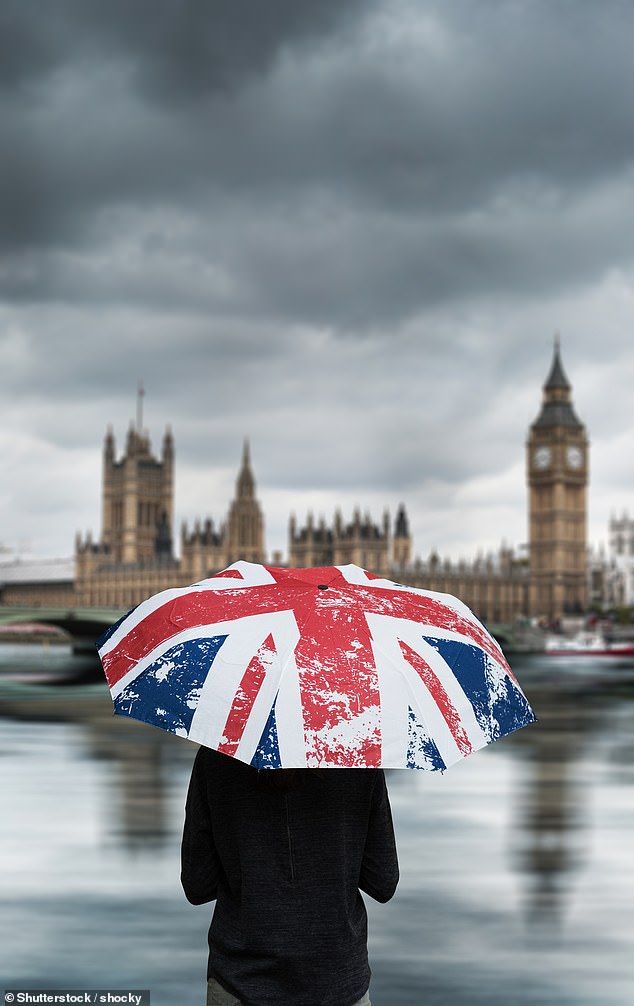 Brexhibitionist: Person dedicated to attracting attention to himself or herself by standing outside Parliament waving flags and wearing funny hats and screeching shrill slogans through megaphones (file image)

Brexplosion: Sudden burst of anger following disagreement over predictions about the European Union. ‘Dad said that they were over here taking other people’s jobs. Tim said that the NHS would fall apart without them. One thing led to another, and then there was this almighty Brexplosion.’

Brexpresso: A thicker, stronger coffee designed to keep you up all night having heated arguments about the pros and cons of a second referendum.

Brextended family: Cousin Geoffrey thinks that Nigel Farage talks a lot of sense whilst Geoffrey’s sister-law Ann won’t hear a word against Boris Johnson. Great-Aunt Angela, on the other hand, thinks that Farage is an awful little man, while her ex-husband’s new wife Pam says Theresa May’s big mistake was to call that General Election.

Meanwhile, Uncle Pete says he’s sick and tired of the lot of them. Yes, there’s nothing like the Brextended family to make Christmas go with a swing.

Brexterminate! Brexterminate! The Daleks are extreme Brexiteers. They are convinced that, following an orderly departure from the EU, stairs will be a thing of the past. ‘It’s Barnier and Juncker who insist on stairs. They’ve always had it in for the Great British Dalek.’

Brextractor Fan: A Brextractor fan is designed to remove unwanted odours of heated discussion from your home and/ or office.

‘I just switched on the Brextractor fan, and it was as if no one had ever mentioned the withdrawal agreement.’

Brextramarital: Secret steamy discussions about the need for a customs union with someone other than one’s husband or wife.

‘I just had to discuss frictionless trade with someone who really understood what it meant. Yes, I know it was brextramarital, but I couldn’t stop myself.’

Gift of the garb: the tweaks behind Kate Middleton's high fashion makeover
Entertainment