A U.S. appeals court has blocked Bayer AG from selling an agricultural weed killer in the United States, the latest setback for a business already fighting an expensive legal battle over another product.

A three-judge panel of the 9th U.S. Circuit Court of Appeals ruled the U.S. Environmental Protection Agency substantially understated the risks related to the use of dicamba, a chemical found in herbicides sold by Bayer and rivals that are sprayed on genetically engineered soybeans and cotton. The herbicides are known to drift away and damage other crops that are not resistant.

The lawsuit was among those German-based Bayer inherited when it bought Monsanto for $63 billion in 2018. The company faces separate allegations that its glyphosate-based weed killer Roundup causes cancer.

Environmental groups have sought cancellation of the EPA’s approval of Monsanto’s dicamba-based XtendiMax herbicide, arguing it harms nearby plants and wildlife.

The court agreed, and its ruling, issued on Wednesday, also blocks sales of dicamba-based herbicides like BASF’s Engenia and Corteva Agriscience’s FeXapan.

Bayer and BASF said they disagreed with the judgment. Corteva said it was reviewing the decision and believed dicamba could be used safely.

Bayer said the ruling related to the agency’s 2018 registration decision that expires in December and that it was seeking new EPA registration for the herbicide for 2021 and beyond. The EPA said it was reviewing the court’s decision and would move promptly to address its order.

“Depending upon actions by the EPA and whether the ruling is successfully challenged, we will work quickly to minimize any impact on our customers this season,” Bayer said.

U.S. Agriculture Secretary Sonny Perdue criticized the ruling and said it was unclear if farmers who had already purchased dicamba products for the current soy season could legally use them. 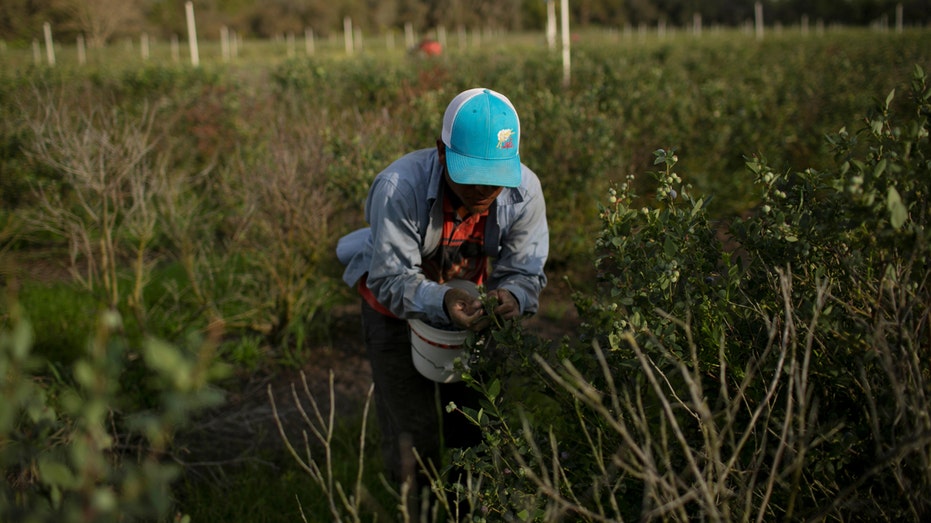 A worker picks blueberries during a harvest at a farm in Lake Wales, Florida. (REUTERS/Marco Bello)

“Farmers across America have spent hard earned money on previously allowed crop protection tools. I encourage the EPA to use any available flexibilities to allow the continued use of already purchased dicamba products,” Perdue said in a statement.

The EPA added restrictions on the use of dicamba in 2018 and the companies adapted as a result. Bernstein analyst Gunther Zechmann said there would therefore be little effect on dicamba volumes for next year’s planting season.

“The company has already made label adjustments, which has therefore made the court opinion moot,” he said in a note.

CLICK HERE TO GET FOX BUSINESS ON THE GO

Arkansas farmer Reed Storey said he was encouraged by the ruling, after his soybeans suffered damage from dicamba sprayed on neighboring fields from 2016 to 2018.

“It’s a move in the right direction in getting the in-crop use of it stopped,” he said.

Some farmers and seed dealers said the ruling could drive a shift away from Bayer’s dicamba-resistant Xtend soybean seeds to Enlist E3 soybeans sold by Corteva.

Xtend soybeans account for more than half of U.S. soy plantings. Farmers turned to the product to protect themselves from dicamba sprayed by neighbors and after some weeds developed resistance to glyphosate.

The American Soybean Association trade group said in a statement it “regrets that the future of dicamba – a very effective weed management product when used responsibly – is on the line.”