A work health and safety company that harassed a Sydney Water employee when it featured her on a poster reading “Feel great – lubricate!” without her knowledge has lost its attempt to overturn a $200,000 payout.

The NSW Supreme Court ruled that the fact it didn’t intend to humiliate her was irrelevant, saying the fact Reem Yelda viewed the poster as unwelcome and it was objectively sexual and likely to humiliate her were the factors that mattered. 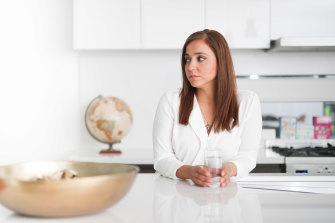 “It was plainly unwelcome conduct for Ms Yelda literally to be made the poster-woman for sexual self-lubrication to her all-male colleagues,” the court ruled on Monday.

Vitality Works, a national health and safety firm that is part of the Seventh Day Adventist Church’s Sanitarium company, had designed the poster to encourage staff to warm up their joints before working for a spine health campaign. 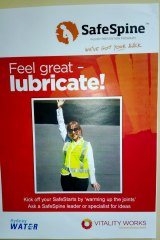 The poster that was the subject of the complaint.

Ms Yelda, a long-serving Sydney Water employee, had agreed to have her picture taken for the health and safety campaign but did not know it would be featured on the poster, which was placed outside the men’s toilets and lunch room at the Ryde depot where she worked in 2016.

“She felt humiliated by the display of the poster,” Justices Lucy McCallum, Andrew Bell and Anthony Payne wrote. Colleagues took the poster to be sexually suggestive, leaving Ms Yelda in tears. She has not returned to work at Sydney Water since and is separately suing the utility.

The NSW Civil and Administrative Tribunal said the damage to her was worth $318,280 but reduced that to $100,000 from Sydney Water and the same from Vitality Works because of a legislated cap on payouts.

Vitality Works appealed to the Supreme Court, arguing the poster was not overtly sexual, had been used before without complaint and was not intended to demean Ms Yelda.

But the Supreme Court disagreed.

“The fact that the poster may also have been capable of conveying a safe spine message (which is not obvious) is not to the point,” the judges wrote. Jokes, horseplay and innuendo could all constitute harassment, they said.

What mattered was Ms Yelda saw the conduct as unwelcome and that objectively, in a male-dominated blue-collar workplace, the image of Ms Yelda smiling and appearing to point at the word “lubricate” suggested a sexual meaning.

The fact Sydney Water had put up the poster after Vitality Works designed it was also not enough for the health and safety company to escape liability, the court found.

A spokesman for Hamers Workplace Lawyers, which is representing Ms Yelda, said in a statement she was pleased with the decision after years of litigation. “However, Ms Yelda’s battle continues in separate proceedings against Sydney Water in relation to the loss of her career,” the spokesman said.

Barrister Kate Eastman, SC, a discrimination law expert, said the decision was a restatement of the clear law on the area in recent decades that the harasser’s intention was not relevant.

“You often hear ‘oh it was just a laugh’, but that is no defence to sexual harassment and never has been,” Ms Eastman said.

Sydney Water and Vitality Works were contacted for comment.

The Truth About Whether Or Not Mullets Are Back In Style