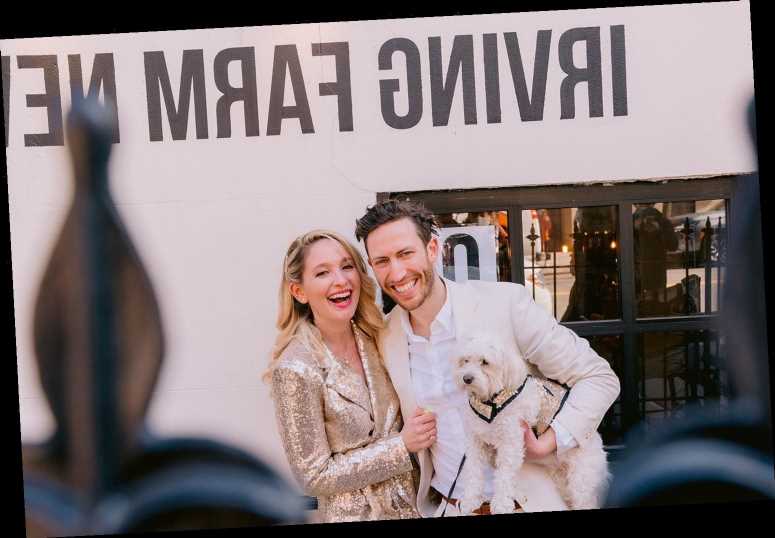 A professional bridesmaid in New York City who has been in more than 125 weddings finally got her own fairytale ending when she married her fiancé on the city sidewalk where they first met.

Jen Glantz, 33, is the founder of Bridesmaid for Hire, a company that offers wedding planning courses, speech writing tips and professional bridesmaids, among other services. Running the company, which launched in 2014, had left Glantz with little time to date. Some weekends she would work two weddings back-to-back, coordinating vendors, breaking up family arguments and taking care of the bride, all at once, she told the Washington Post.

As she watched her clients say "I do," Glantz wondered if she'd ever get married. Some of Glantz's brides decided they didn't want to go through with the wedding right before walking down the aisle, and others called her months later, saying they wished they hadn't gotten married, according to the Washington Post. Cut to 2016: Glantz decided to go on 14 dates in one month. Adam Kossoff,  the vice president of marketing at sports nutrition company Ghost Lifestyle and now her husband, was Glantz's 15th date, according to the New York Times. The pair met at Irving Farm, a small coffee shop near Glantz's Murray Hill apartment.

"It felt like a movie scene, where everyone was blurred out except this one person," Glantz told the New York Times.

They began dating and in 2017 sold most of their belongings to become "digital nomads," working remotely and living in different cities each month, including Los Angeles and Chicago.

When they returned to New York in 2019, Kosoff, 33, wanted to propose, but he questioned whether Glantz was ready to make the jump from perpetual bridesmaid to bride.

"For a while I was worried she might never want to get married," he told the New York Times.

He reportedly popped the question during a family trip to Boca Raton, Florida in July, and Glantz happily accepted. They planned a 170-person wedding for October 2020, but like many engaged couples during the COVID-19 pandemic, they decided to postpone the reception until 2022 in favor of a smaller, safer ceremony. On March 19, Glantz and Kossoff eloped outside of the coffee shop where they first met. Kossoff's brother Eric, a Universal Life minister, officiated the ceremony, and a few friends served as witnesses, according to the New York Times. Glantz wore a shimmery gold pantsuit and Kossoff wore a tan suit from J. Crew, the Washington Post reported. Friends and family watched the pair say their vows over Zoom.

Kossoff told the Washington Post that the intimate wedding let them focus on each other and was "a special moment where we signed a paper and made it official together."

"You don't have to wear white. You don't have to have a bouquet. You just have to sign your name on the dotted line," Glantz added. "So anything else should be what you want and not what the world convinced you of."