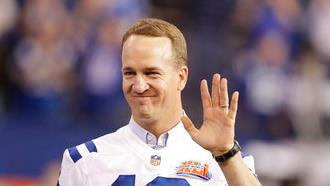 New bidder for the Carolina Panthers?

The only thing colder than late-game heroics by the legendary Peyton Manning are the calls he’s been putting in to get his bourbon, Sweetens Cove Tennessee Bourbon, up on shelves.

Manning has hitting the lines and cold-calling local businesses in Indiana ahead of the brand’s launch. In an IndyStar report, Peyton gave some business insights on spreading word of mouth using some traditional marketing magic.

"I’m in the cold-calling business," confessed Manning, also providing his scripted pitch that reads like an awkward prom invite.

"Um. Hey, this is Peyton Manning. I’ve got a really good liquor brand called Sweetens Cove. It’s got the craziest story behind its name, you know. It’s smooth and I think your customers might like it. Would you be interested in, um, trying it out?"

Peyton may not be as well-versed with the liquor business as he is with offensive schemes, but the retired QB, so far, has put in the minutes and elbow grease to give the brand some early success. "Let me make it real clear that I am a high handicapper when it comes to being a bourbon expert and drinking bourbon, I’m new to it."

He admitted that name recognition led to potential suitors, or fans, giving him a call back. But the eldest Manning brother understands that signatures going forward have to endorse the quality of his bourbon rather than become another opportunity for an autograph. "I do at least kind of get a response and call back," added Manning. "But the bourbon has to do it after that. It has to be good."

Already drinking in the outstanding reviews that he and brother, Eli, have been receiving as part of Monday Night Football’s Manning-Cast, post-life retirement has been just as good it was back in Indy or Denver.

OMG Scott Foley Is TERRIFIED Of His Wife While Discussing Jennifer Garner Relationship!