Home » Lifestyle » ‘Black Women Got 99 Gifts, Being Jesus Ain’t One.’ Why Shanita Hubbard Wants To Dismantle The Ride Or Die Chick

‘Black Women Got 99 Gifts, Being Jesus Ain’t One.’ Why Shanita Hubbard Wants To Dismantle The Ride Or Die Chick

Shanita Hubbard, author, advocate, and sociology professor, was having a particularly stressful day when she found the inspiration for her new book: Ride or Die : A Feminist Manifesto For the Wellbeing of Black Women. Hubbard had spent months preparing for an important meeting at work. She’d gathered some of the city’s power players to discuss a project. But before it was over, she had to leave. She got a call from her daughter’s school saying there was an emergency. She apologized to the movers and shakers in the room and jumped on the highway.

While in the car, Nas’ “One Love,” came on. As a woman who ranks the Queens rapper in her top 5, it was a song she’d heard numerous times before. But today it sounded different. “One Love” is about mass incarceration. It’s an open letter to Black men behind bars. But on this day, Hubbard took note of how the women in the song were described.

“Black women were dismissed as unloyal if you weren’t holding your man down, and then the only other woman was the mom who was crying,” Hubbard tells ESSENCE. “There are so many Black women in between who are also impacted by mass incarceration. And we just don’t get that type of acknowledgement. We don’t get recognized.” 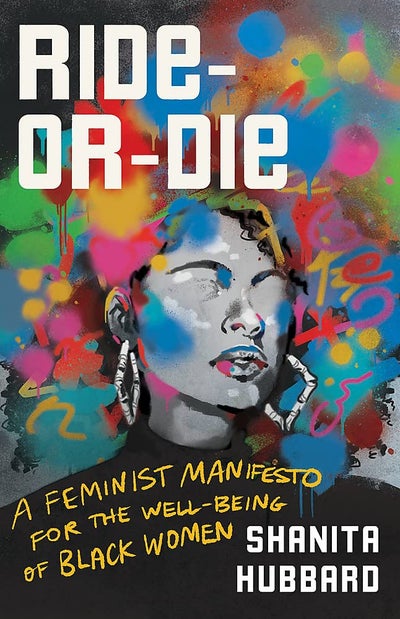 Hubbard knows about that firsthand. Not only was she developing a program to offer alternatives to prison for non-violent offenders at the time, she’d also been romantically involved with someone who was incarcerated. She knew there was more to the story.

“I was juggling a lot of stress. And I just started thinking deeper about the expectations placed on Black women,” Hubbard says.

These expectations extend far beyond this country’s penal system. They show up in virtually every facet of Black womanhood.

With all that on her mind, Hubbard knew she needed to write about this phenomenon for the community and for herself.

The Ride of Die woman had become ingrained into who she was because the Black community is taught to see the Black woman’s self-denial as love.

“We’ve seen our foremothers be amazing. It’s wonderful the way we can show up for each other,” Hubbard admits. “But there’s a piece of that that gets conflated into this sacrificial, ‘I do everything for everybody, myself be damned.’ That gets interpreted as love. ‘Big Momma loves us. She ain’t even eat. She cooked this meal for nine hours straight and we all ate but she didn’t even feed herself.’”

But it’s not just in our families. It shows up in our churches, where the Black women who make up the majority of the congregation work 40 hours a week in unpaid ministry. Hubbard says you don’t have to be churched to have felt the effects.

“There’s no separation between church and hood,” Hubbard states. “Those mothers have raised your mother, our aunties. So we’ve seen this generational pattern. We’re giving so much.”

The Ride or Die trope is certainly present in Hip Hop, the backdrop for Hubbard’s book.

“There’s always this example of a woman doing the absolute most to get crowned that queen. ‘Queen, wear the crown that be down for whatever,’’ Hubbard quotes Method Man and Mary J. Blige’s iconic duet All I Need then abruptly stops herself to challenge the lyrics. “Down for whatever?! Bro! I don’t know about that!” she exclaims. “It’s reinforced in every aspect of our culture: in our church, in our music, in our families. This is very specific to Black womanhood and it’s harmful for us.”

But it’s not just outside institutions forcing the Ride or Die trope onto Black women. We cling to it ourselves.

After all, saving everyone and everything comes at a great cost for Black women..

“When you’re constantly pouring out to everyone, you have nothing left for yourself,” Hubbard says. “You’re physically exhausted so you don’t look as good. You’re pouring out your resources, financial and your time. Your roots look a mess. Your nails are not done. You’re not keeping yourself up. Then you’re not pausing to take the time to look at the other areas of your life that are not healthy for you.”

Directing so much attention outward, whether its romantic relationships, institutions, work or family, our humanity suffers.

“There are a lot of areas we need to explore and unpack for our own wellbeing,” Hubbard said. “I’m also examining how we cis-hetero Black women don’t always show up the way we should for our queer sisters–and how that harms us. When you’re constantly being a ride or die for somebody else, none of these things are being addressed in your own life and that depletes you emotionally, financially and spiritually. Your shine is gone.”

So many of us have been so conditioned and so accustomed to pouring from half-empty cups that we might not even recognize the ways we’re being short-changed in our relationships. Hubbard explains what reciprocity should feel like…and what it shouldn’t.

“When your back is up against the wall, who can you call? If you find yourself stuck, you need to start examining your relationships,” Hubbard says.

With reciprocity, Hubbard uses the example of another rapper to speak to the need for restoration as well. In her chapter about reciprocity, she references Jay Z’s song, “4:44,” where he admits and atones for the mistakes he’s made in his marriage.

“I was one of those people really excited to watch Jay Z grow from, ‘I was just f*cking them girls, I was gon get right back,’ to talking about the pain that he’s caused women,” Hubbard shares. “It was dope to see Jay Z grow up because it felt like Hip Hop was growing up. But what was missing with that narrative was, ‘Okay, how do you restore the harm that you did?”

In the song, Jay Z says that it took the birth of his daughter to see the world through a woman’s eyes. To Hubbard, that’s incredible. “All your life, you’ve been the son of a Black woman. You have a Black wife. You have a Black sister. Based on your own song lyrics, you’ve had Black girlfriends. You have platonic friends that are Black. But you never considered the world through our eyes. But Black women—we could write a dissertation on the plight of the Black man. We have always considered the world from the eyes of our brothers. While he couldn’t consider the world through our eyes, he spent a lifetime doing harm. Bravo that you’ve stopped. But how do you restore that harm?”

For Jay Z it may be a rhetorical question. And Hubbard is clear that this extends past just Beyoncé. Restoration is vitally important because of what it says about the value of Black women.

“When we get too excited that the person stopped harming us, when we accept that without restoration, what we’re really saying is that we agree to a social contract that a Black woman’s pain is a suitable bridge as long as the Black man that harmed her grew. And it’s not. You are responsible to restore what you’ve hurt,” Hubbard says.

For Black women restoration may be what we owe ourselves for adopting and acting out the Ride of Die trope. On the other side of that harmful role is a deeper, richer fullness of life.

“After we’ve rejected the whole Ride or Die industrial complex, let’s explore the other areas of our lives that we need to focus on in order to center our own wellbeing,” Hubbard says.