Bill Cosby was released from prison Wednesday after the Pennsylvania Supreme Court overturned his 2018 sexual assault conviction, upending the first high-profile case of the #MeToo era. Cosby, 83, was convicted of sexually assaulting Andrea Constand, a former Temple University employee, at his home in 2004.

In its 89-page opinion, the Pennsylvania Supreme Court said a “non-prosecution agreement” with a former prosecutor prevented Cosby from facing charges. The court said Bruce Castor, the former Montgomery County district attorney, declined to prosecute the case and gave Cosby the assurance he would not be criminally prosecuted if he testified in a civil case brought by Constand.

But Cosby testified that he gave quaaludes to women he had pursued for sex — evidence that Castor’s successor, District Attorney Kevin Steele, used against him in 2015. Later, Cosby was convicted on three counts of indecent assault and sentenced to three to 10 years in state prison.

“In light of these circumstances, the subsequent decision by successor D.A.s to prosecute Cosby violated Cosby’s due process rights,” the justices wrote Wednesday.

“There is only one remedy that can completely restore Cosby to the status quo ante,” they continued. “He must be discharged, and any future prosecution on these particular charges must be barred. We do not dispute that this remedy is both severe and rare. But it is warranted here, indeed compelled.”

In a statement, Constand and her legal team said the court’s decision was “not only disappointing” but concerning because it could discourage sexual assault survivors from coming forward. “We urge all victims to have their voices heard,” they said.

The once-beloved entertainer was best known for his role as Cliff Huxtable, the husband and father in “The Cosby Show,” but his reputation was tarnished as dozens of women accused him of sexual assault and misconduct.

Late Wednesday, Cosby returned home and celebrated the court’s decision. “I have never changed my stance nor my story,” he said in a statement. “I have always maintained my innocence. Thank you to all my fans, supporters and friends who stood by me through this ordeal. Special thanks to the Pennsylvania Supreme Court for upholding the rule of law.”

His attorney, Jennifer Bonjean, said Cosby served “three years of an unjust sentence and he did it with dignity and principle.” 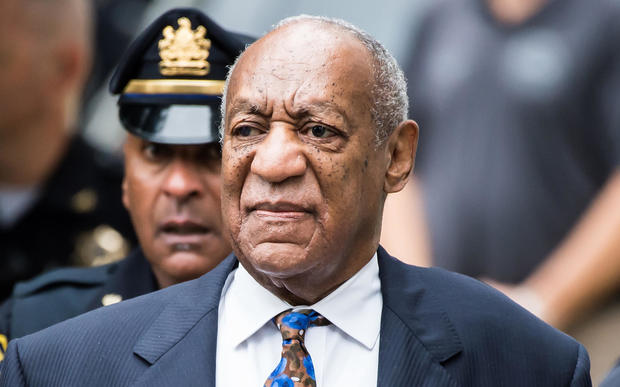 In a statement, Steele, the district attorney, said Cosby was freed on a “procedural issue that is irrelevant to the facts of the crime.”

“The majority decision by the Pennsylvania Supreme Court orders the release of William H. Cosby Jr. from state prison,” the statement said. “I want to commend Cosby’s victim Andrea Constand for her bravery in coming forward and remaining steadfast throughout this long ordeal, as well as all of the other women who have shared similar experiences. My hope is that this decision will not dampen the reporting of sexual assaults by victims.”

Phylicia Rashad, who played Cosby’s wife on “The Cosby Show,” celebrated the news Wednesday. “FINALLY!!!! A terrible wrong is being righted — a miscarriage of justice is corrected!”

Meanwhile, Amber Tamblyn, a co-founder of Time’s Up, was angered by it: “I am furious to hear this news. I personally know women who this man drugged and raped while unconscious. Shame on the court and this decision.”

Jason Ralph and Trevor Einhorn Are Looking for a Great Time