Home » Lifestyle » ‘Because it matters’: What is driving Penny Wong to get out of opposition

‘Because it matters’: What is driving Penny Wong to get out of opposition

On the morning Prime Minister Scott Morrison announced a defence pact with the United States and Britain to build nuclear-powered submarines, Labor leader Anthony Albanese missed a call from a former prime minister.

Paul Keating was trying to reach Albanese just as he was taking Labor’s AUKUS response to shadow cabinet, and before he addressed the media. 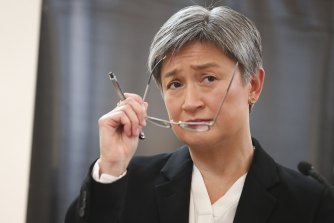 But the two did not talk until well after Albanese stood up at his press conference later that day where he said Labor welcomed the AUKUS agreement because it would “maximise the interoperability of our defence and security arrangements”.

A week after the September 16 announcement, Keating launched a tirade against his own party, accusing foreign affairs spokeswoman Penny Wong of condoning a “false representation of China’s foreign policy” and having “neutered Labor’s traditional stance as to Australia’s right to strategic autonomy”.

The episode underlined how sensitive the management of national security policy can be at a time when a rising and more aggressive China has created the most difficult challenges for Australia since the end of World War Two.

Albanese and Wong are criticised from both sides – there are those, including Keating, who argue they are not going far enough in criticising the Coalition, while the Prime Minister accuses Labor of having a “an each way bet on national security”.

To some observers, the attack by Keating, who will address the National Press Club on Wednesday, was a vindication of the positions Wong has taken and the sway she holds in the opposition.

“I agree with Paul Keating on most things, but not this,” Wong told this masthead.

Wong says she is “very aware” of the Prime Minister’s attempts to wedge Labor on national security.

“We understand the way in which Scott Morrison will try and play national security again for domestic political purposes and I think Australians are increasingly seeing that, but I think the truth is always a good place to be in politics, isn’t it?”

Wednesday marks 20 years since Wong was elected to Parliament. It has been eight years since she was a cabinet minister in government. In recent years she has dominated news headlines for her interrogation of government ministers and senior public servants at Senate estimates hearings.

But the South Australian senator, who considered quitting after Labor’s 2019 election loss, says she is sick of questioning from opposition.

Wong’s public persona as a darling of the Left often runs counter to her reputation internally as a fiscally conservative hardhead and self-confessed foreign policy realist. That approach has fuelled internal conflicts and earned her plenty of enemies.

“I think it suits some people to try and play to stereotypes about what an Asian woman in my position on the Left, who is also in a same-sex relationship, what someone like that might stereotypically think – rather than look at what I say and what I do,” Wong says.

In recent weeks, as the fallout over the AUKUS announcement has grown amid a full-blown diplomatic spat with France, Labor has been escalating its criticism of Scott Morrison’s handling of the decision.

After French President Emmanuel Macron accused Morrison of lying to him over the dumping of a $90 billion submarine deal in favour of the AUKUS pact, Albanese and Wong claimed the Prime Minister had undermined Australia’s international reputation through his alleged dishonesty.

While still supporting the goal of acquiring nuclear submarines under AUKUS, Labor has also been increasingly critical of the government over a potential capability gap between when the nation’s current fleet of Collins submarines are retired and the first of the nuclear fleet is ready by as late as the 2040s.

With an election due within months, what would a Prime Minister Albanese and Foreign Minister Wong do differently?

Wong says Labor will be guided by three principles – projecting the reality of modern Australia; developing deeper partnerships with other nations, particularly in the Pacific; and developing a more capable and better resourced foreign service.

She also hints Labor would commit to a significant increase of the nation’s foreign aid budget promising the party would “have more to say about this before the election”.

Wong also admits that whoever wins the next election will have to address the capability gap in submarines.

Wong says people need to understand how China has changed, citing the “election of President Xi Jinping and China’s increasingly assertive and aggressive behaviour internationally, including its economic coercion of Australia”.

“This is an expression of nationalism for the Chinese Communist Party. So I think it’s important that we understand the nationalist drivers behind China’s behaviour.”

She points to her opposition of the then-Turnbull government’s proposed extradition treaty with Beijing in 2017 as an important move, saying signing the treaty “was not something that was in our interests to do, not withstanding the effect on the bilateral relationship”.

Wong says her background as a Chinese-Malaysian born in Malaysia gives her a fundamental grasp of south-east Asia, while she also has an appreciation of the importance of not demonising Chinese-Australians in the domestic debate.

One of the focuses Wong has had during her time in the portfolio has been organising former senior national security agency chiefs to brief the Labor caucus, believing that politicians need to be better versed in the challenges facing Australia.

One of those is former senior diplomat and intelligence agency boss Allan Gyngell, who says Wong is “forensically attentive to the job and by now deeply read in the issues that would face her”.

“She comes from the mainstream of Australian foreign policy making on issues like support for the US alliance and an international order based on rules, but she also has a deep experience and understanding of south-east Asia that would be a real break from the past.”

Let It Snow With These Stylish Winter Boots From Zappos