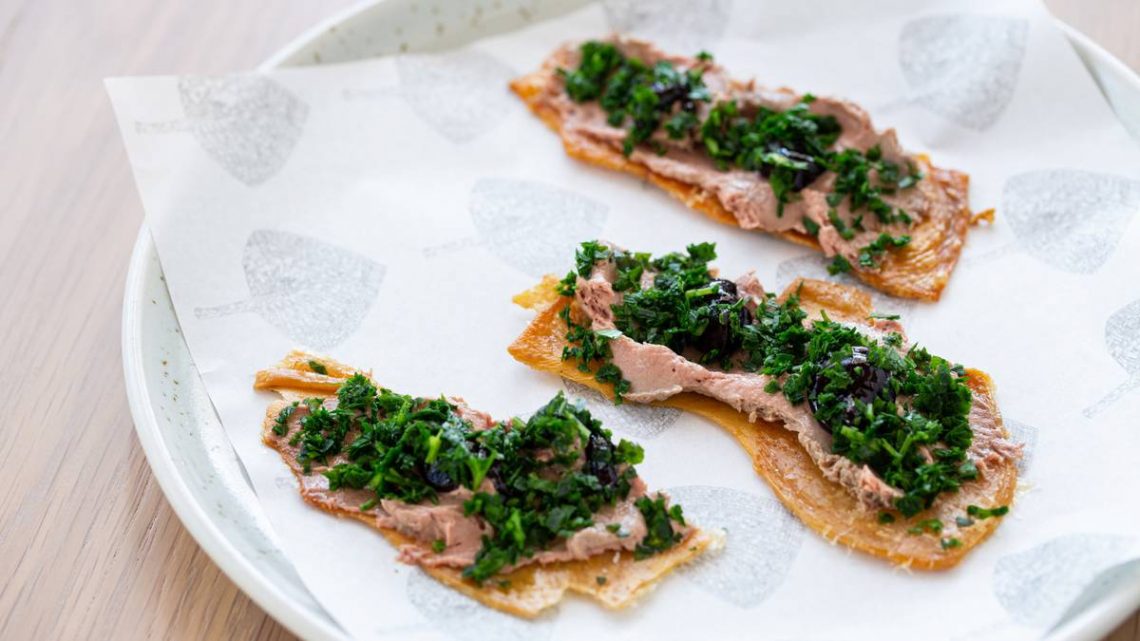 The chef is front and centre but Mr Morris delivers at every level, writes restaurant critic Kim Knight.

A few years back, researching a story about a palm tree and the patriarch who planted it, I encountered a Samoan proverb: “A gau le pou tū, e lē tali pou lalo – when the middle post is broken, the side posts cannot withstand.”

Last week, sitting in Michael Meredith’s new Britomart restaurant Mr Morris, I thought about that maxim. There was the chef – tall, stern and central. He drew the eye, commanded the room and did all of this in almost utter silence. Let your actions speak louder than words?

Allow me: The chicken skin with the liver parfait screamed “yum” and also “wow”. But reducing Mr Morris to single syllables does a great disservice. Honestly, it had me at the garnish.

Who knew the leaves of the tuberous begonia – that shade-loving staple of any given gran’s garden – would taste like a delicious lemony cucumber? Well, obviously Michael Meredith did and that’s why you’ll happily pay the reasonably big dollars to eat here. It’s delicious AND surprising and, in these over-googled times, it’s very nice to encounter things you can’t immediately explain.

Like, why, for example, does that teeny-tiny pain au chocolat taste like a sausage roll? And when is a mushroom also a chip? Choosing from the $6-per-snack selection was a bit like standing at the lolly counter and wishing you had more pocket money. Trust me, you can’t make a bad decision.

That black pudding-stuffed pastry that looks like it should come with a latte is destined for Auckland food icon status. It straddles every eating out trend you could think of – lowbrow-luxe, haute-pop, serious-fun, etc – but mostly, it’s just decadently delicious. Meanwhile, a delicate oyster mushroom has been crisply coated in (I think) tapioca flour. It’s salt-and-very-white-peppery, with a little tingle of vinegar. Smarter and more elegant than your usual mushroom.

Mr Morris (in the space formerly occupied by Cafe Hanoi) encourages you to dine old school. It lists entrees and mains in a way that could confuse 30-somethings whose core competencies include the ability to cut one scallop three ways. “Did you order to share?” asked the shiny-teethed folk at the table beside us. Certainly not. Anyone who shares restaurant-priced pāua ($28 with okra, corn and rice gnocchi) is an idiot.

The gnocchi turned out to be tteok – cylindrical Korean rice cakes that perfectly mimicked the tender, springy bite of the thinly sliced shellfish. Genius! (Later, when I saw the Instagram images of the kitchen roasting the teeniest-tiniest fresh ears of pale summer gold – because it turns out that baby corn is not born in a can – I fell in love with Mr Morris just a little bit more).

If the chef looked headmaster-stern, the waitstaff were the cool art-English-drama teachers gently guiding you to become a better version of your dining self. (I am referring, explicitly, to a pour of the Ostler pinot gris that was not on the by-the-glass menu but had been opened at lunchtime and might be fabulous with the pāua, what did I think? Reader, I thought yes). Meredith was the centre of that kitchen’s universe but the side posts were admirably holding their own.

On the night we visited, quail ($27) had been substituted for duck. It retained an intense note of mandarin – an entire orchard distilled on one plate, balanced with sweet-savoury onion. Later, the kitchen did this again, delivering approximately several thousand pineapples with my pork collar dish. I spent forever searching for the memory flavour and almost burst out laughing when I got there: pineapple pizza. No cheese in sight but a sublime smack of sour blurred with rich meat that was creamy in flavour (though not in texture – if you’re weary of pork belly, the collar is a toothsome revelation).

Not enough restaurants make a virtue of pineapple. It arrived again at dessert, as a scoop of palate-cleansing sorbet next to a skillet of hot, sweet pani popo ($28 to share). The little bread balls had been stuffed with desiccated coconut like some sort of inside-out Boston bun. Usually baked in coconut sauce, here you are required to add liquid tableside. I’m not sure this restaurantification of a Samoan classic fully worked (I like the bread to be softer) but it definitely ticked the surprise and delight box.

You’re sitting very close to your neighbours so it is easy to see what you might order next time. “Cheese pao”, for example, are those brilliant crumpety-chewy Brazilian puffs and chicken is coated in languid, earthy, mole sauce. Much of the menu – including a hollandaise-sauced cabbage entree – is cooked sous vide-style. Assuming you’re not vegetarian, that cabbage also gets a slosh of meat fat and jus. Is there a better sounding cabbage in this country?

Meredith made his name serving degustation-style meals on Auckland’s Dominion Rd. The incredible attention to detail and magnificently concentrated flavours are back but I prefer the heft and sweat of this new place.

Mr Morris smells faintly of smoke and it sounds like people having a bloody great time. The dining room is gorgeous – from the front door with its cast-metal woven fan, to the lights that pick up on that pattern. That central, open kitchen focuses your attention on the giving and receiving of food; many of the tables are so closely spaced, it feels natural to chat to your neighbours. Modern Pasifika with home and hearth at its heart.
Mr Morris: cnr Galway St and Commerce St, Britomart, Auckland, Ph (09) 869 5522
We spent: $298.50 for two.