For the past few years, artists Jennifer Turpin and Michaelie Crawford have been wrangling seaweed, coaxing long pieces into spectral shapes that appear to move with the waves. 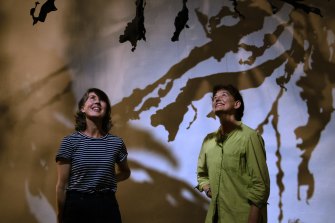 Artists Michaelie Crawford and Jennifer Turpin (in green shirt) with their installation Seaweed Arboretum which is part of Australia’s first seaweed festival that started at Manly Art Gallery and Museum on Friday. Credit:Rhett Wyman

It’s designed to highlight the threats to Australia’s “other” big reef, the Great Southern Reef, a biodiversity hotspot that is home to 1500 species of seaweed, many unique to Australia. In temperate waters, it covers 71,000 square metres and runs across five states from near the Queensland/NSW border along Australia’s southern coast to Western Australia.

To prepare the botanical art installations, called Forest, Flora and Float, Turpin and Crawford pressed, dried and sculpted seaweed while it was still wet. Some species’ hides were as tough as leather. Turpin said they “smelled like wet dog” and were slimy and slippery to handle.

The artists, whose sculpture is often made from more obedient inorganic materials, discovered the seaweed would change shape overnight as it dried.

“The seaweed is directing us, and we are directing it,” Crawford said. “The seaweed tells you what to do, and we arranged them in a way that makes them look lively and as if they are still floating in water.” 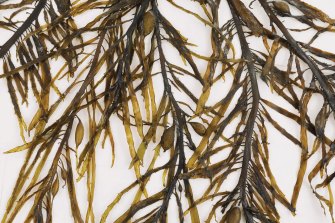 The month-long Seaweed Forests Festival highlights the beauty and diversity of the seaweed forests. Events for adults and children include crayweed planting, seaweed inspired food and drink, including beer; events on new and traditional uses of seaweed from roof thatching to medicine; and the art and music it inspires. 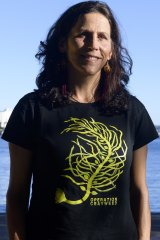 Seaweed sucks up carbon dioxide at a phenomenal rate, and helps reduce the acidification of the seas.

Australia has the greatest biodiversity of seaweed in the world along the Great Southern Reef, said marine scientist Adriana Verges, from the Sydney Institute of Marine Science and the University of NSW, who worked with the artists.

She said most people knew that ocean warming had caused the bleaching of the Great Barrier Reef, but very few knew about the ecosystem that existed on the Great Southern Reef.

“We’ve already lost 95 per cent of the giant kelp forests in Tasmania, yet people don’t even know about it,” she said. “With this lack of knowledge, there’s a lack of money devoted to its preservation,” she said.

In Sydney, where crayweed disappeared in the 1980s across 70 kilometres of coastline because of pollution, Professor Verges has worked with local communities to replant crayweed, resulting in plenty of baby plants, known as craybies, and the emergence of small forests.

While crayweed disappeared because of pollution, golden kelp was also disappearing in northern NSW and in Western Australia because of the warming of the oceans, she said.

There is also a sea tulip hiding among the seaweed, said Turpin. “It is a Where’s Wally,” she said, referring to the children’s book that encourages readers to spot the odd man out.

Northern Beaches Council mayor Michael Regan said, “[The exhibition] is a fascinating look at seaweed and its amazing shapes and forms, floating in the gallery as if it was in-situ on the reef.”