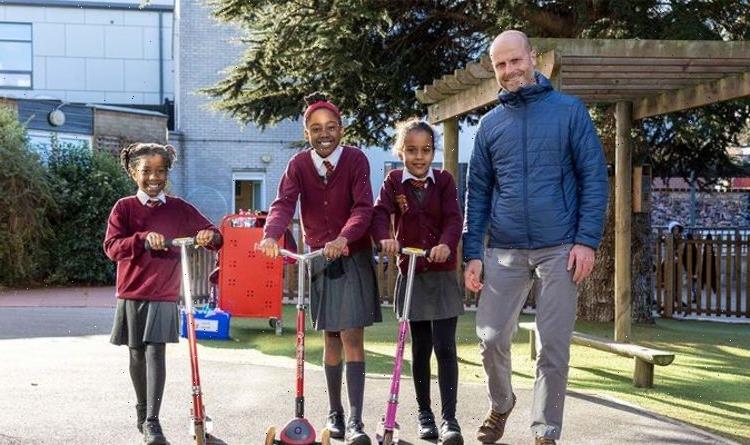 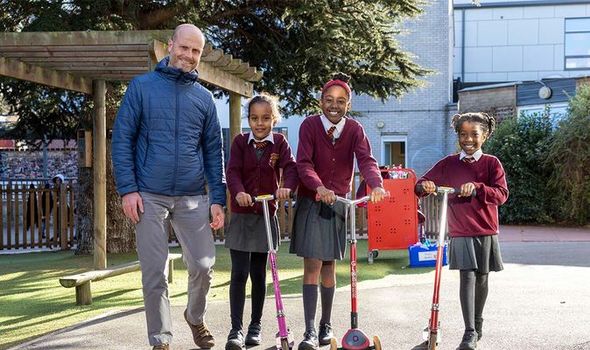 That puts at risk the health of nearly nine million vulnerable youngsters across the country – from nurseries to colleges. At least 88 per cent of schools are in areas breaching new World Health Organisation (WHO) limits for the gaseous pollutant nitrogen dioxide, figures from Global Action Plan (Gap) show.

This figure rises to 99 per cent of UK schools exceeding WHO guidelines for deadly PM2.5 particles – tiny particles from burning fossil fuels.

These tiny particles can penetrate the lungs and enter the blood system, potentially causing a decline in respiratory function, increased A&E visits and hospitalisation for lung and heart problems.

Only 13 schools in the UK – in rural Scotland – are in areas that do not exceed the WHO’s 2021 recommendations for PM2.5, analysis by Asthma UK and the British Lung Foundation (BLF) found.

Around 40,000 deaths in Britain each year are linked to air pollution, according to a 2016 study by the Royal College of Physicians.

Sarah Woolnough, chief executive of Asthma UK and the BLF, said: “Road traffic is a leading source of harmful air pollution and it’s not just a city centre problem.

“Based on the latest WHO guidelines, 99.8 per cent of all schools and colleges in the UK are in areas with unsafe levels of air pollution.”

In September its guideline limit for the most damaging pollution – PM2.5 – was halved from 10 to five micrograms per cubic metre.

Analysis by Asthma UK and the BLF found the top 10 most polluted schools for PM2.5 across the UK are all located in Hampshire, with the top six in Portsmouth and the others in Southsea.

Meanwhile, every school in England in an area classified as “mainly rural” still exceeds the

“As they grow, they continue to be at risk because their immune systems, lungs and brains are still developing – which research shows has the potential to cause lasting harm.

What is happening where you live? Find out by adding your postcode or visit InYourArea

“Clean air is an essential necessity for life and it must be treated as such, just like clean water and healthy food.”

The Daily Express Green Britain Needs You crusade encourages everyone to do their bit for the planet. Mums For Lungs, a local grassroots campaign organisation for clean air, has called for children to be protected at schools where they spend so much of their time.

Jemima Hartshorn, 39, is the group’s London-based founder. She has daughters,Trissie, five, and Lea, two, and said air pollution has a “huge, detrimental impact” on the NHS and the wider economy.

Public Health England warned in 2018 that the costs to the health service and social care could reach £18.6billion by 2035 unless action is taken to tackle filthy air.

Jemima’s parent group has called for ambitious clean air targets in law that will reduce the levels of harmful pollutants in our air. She said: “We need to understand that we have a huge responsibility to reduce air pollution in order to protect ourselves and our children. We all have a part to play in this.

“There’s no doubt the issue is not being taken seriously enough. I don’t think that any policy maker at any level is doing what needs to be done.”

A Defra spokesman said: “Air pollution has reduced significantly since 2010 – at a national level emissions of fine particulate matter have fallen by 11 per cent, while emissions of nitrogen oxides are at their lowest level since records began.

“To continue to drive forward tangible and long-lasting improvements to air quality we are committed to setting stretching and ambitious targets on air quality through our Environment Act.”

An 11-year-old boy recently told me that when he was first diagnosed with asthma at seven there were just two inhalers in the cupboard at his school. He’s now in the final year and that cupboard is full.

As a parent and chief executive of a respiratory charity, his story really struck a chord.

The boy lives in Manchester, which has some of the worst pollution. And like millions of children in towns and cities, he is exposed to levels daily that are considered dangerous by the

World Health Organisation, and illegal in some cases.

Road traffic is a leading source of harmful air pollution and it’s not just a city centre problem, with air pollution spikes found at the school gates of small rural communities. Some 99.8 per cent of UK schools and colleges are in areas surrounded by unsafe levels of air pollution, based on the latest WHO guidelines.

About 1.1 million children are receiving treatment for asthma and whilst there can be many other factors, the evidence linking air pollution to new cases of asthma and other forms of lung disease is compelling.

More than half of people with asthma tell us breathing dirty air is a trigger, which can result in attacks such as the one Ella

Children have no choice over where they live, learn and play. That’s why we want the Government to commit to clean air targets in law.

In the short term we also want to see measures such as traffic-restricted school streets, health advice and air pollution alerts to help protect growing lungs from harm.

The Hot List: Best Christmas subscriptions for gifts worth signing up for
Entertainment