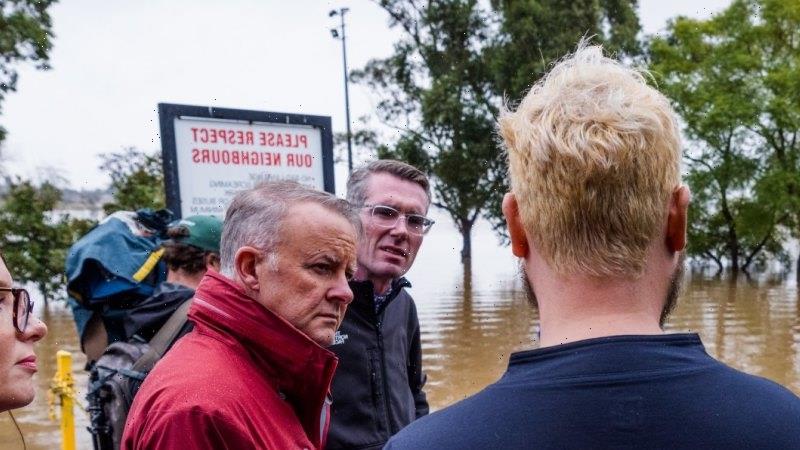 Prime Minister Anthony Albanese says a global failure to act on climate change has thrust disaster on the state’s flood-ravaged communities, as he visited the Hawkesbury to face locals inundated for the fourth time in 18 months.

In his first visit to the region, Albanese vowed to heed the lessons of the emergency and work with all levels of government on flood mitigation strategies in the national interest. 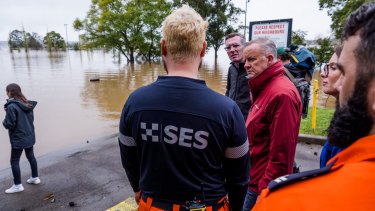 Prime Minister Anthony Albanese with NSW Premier Dominic Perrottet in Richmond, which has been severely affected by flooding in the past week.Credit:James Brickwood

“My government has changed Australia’s position on climate change from day one,” he said.

“The science told us that if we continued to not take action globally on climate change, then these events, extreme weather events, would be more often and more intense. And what we’re seeing, unfortunately, is that play out.”

The prime minister travelled to Windsor and Richmond on Wednesday with Premier Dominic Perrottet to survey the impacts of the flood, after receiving a briefing at the state emergency operations centre in Homebush.

Earlier he announced a $1000 disaster recovery payment to be made available to flood victims from Thursday, on top of initial disaster assistance already flagged this week. 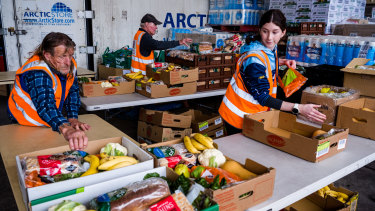 On Wednesday morning, there were 85,000 people across NSW under evacuation orders and warnings, while the federal government will make available another 150 defence personnel to assist with the recovery effort.

At the Hawkesbury Helping Hands local food bank, co-founder Linda Strickland said she wanted the prime minister to see the community outreach first hand, adding that the charity was crying out for funding after going “non-stop” since the Black Summer bushfires.

Strickland said Wednesdays were usually “hamper day,” when locals collect food essentials and fresh produce boxes for a gold coin donation. After four floods in 18 months, she said it was a struggle to keep up with demand.

“This is what we do every Wednesday. Just now it’s with the press, the prime minister and a flooding patch of people,” she said. 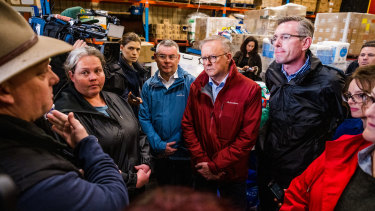 Touring the facility with the premier, Albanese spoke with locals forced to flee their homes again this week, some with only their pets and the clothes on their backs.

Windsor local Scott Hinks thanked the leaders for visiting but said the region was suffering years of inaction and insisted genuine flood mitigation measures must follow.

“We actually need action now and this is the first part of it … Labor and Liberal, getting together. This is our first step, getting together and getting an action plan happening,” he said.

In a personalised plea to the prime minister, he added: “You and I are both Souths supporters. Let’s get into the front row and start working. Otherwise, you’re going to visit here again.”

The debate over the state government’s proposal to raise the Warragamba Dam wall has also been reignited by the flooding event. The $1 billion-plus plan to raise the wall by 14 metres has proven controversial, with opponents arguing it could impact the world heritage-listed Blue Mountains.

The premier on Wednesday said a business case for the project had been completed and was with the federal government, adding that planning, environmental and engineering issues were still to be worked through.

“It’s not a simple project…but we are committed to it. [Minister Stuart Ayres] is working very closely with his counterpart in Canberra in relation to work and a joint funding arrangement,” he said.

“Our focus right now is on our people getting back on their feet as possible…but please don’t take from this that we’re not doing that long-term thinking.” 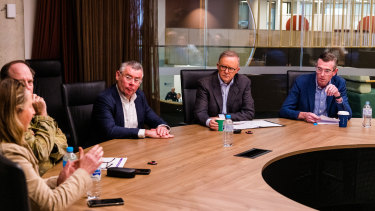 The prime minister said he would work co-operatively with the state government on the proposal at the appropriate time.

Albanese also addressed criticism from the federal opposition for his recent international travel – attending the NATO summit in Madrid and visiting wartorn Ukraine – was “beyond contempt”.

He said as long as war was ongoing, there would be implications for Australia and its national security after Perrottet commended him for balancing international and domestic concerns.

“It says a lot about the people who made those comments and I thank Premier Perrottet for his response when asked about it. That’s what people want to see … working together in the national interest.

He said one of the key reasons he was engaging internationally was to lift global action on climate change.

“But Australia needs to be a part of that,” he said. “No state and no nation can act by itself.”