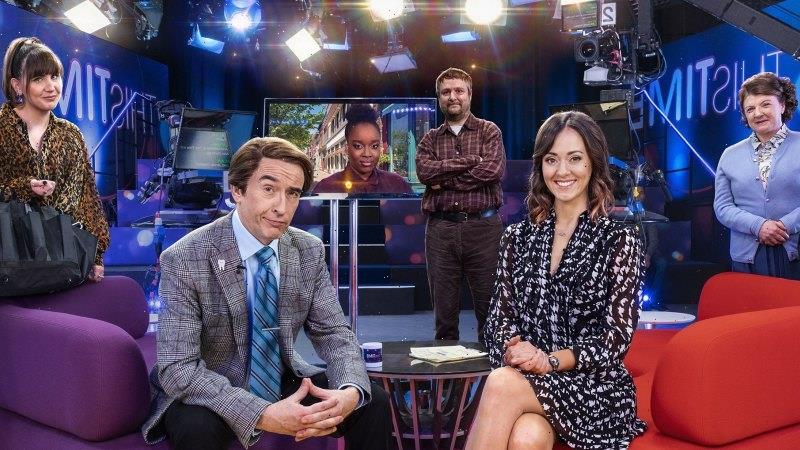 THIS TIME WITH ALAN PARTRIDGE
★★★★

Alan Partridge should never have worked. He was too awful, too uncomfortable to watch, too much of a relic, but somehow, like a cockroach after a nuclear meltdown, he not only lives, he’s thriving. It’s as if 2021 was built for him. 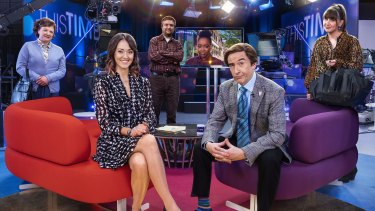 That this should be happening is no surprise. Even though he was created 30 years ago by Steve Coogan and Armando Iannucci as a parody of British broadcasters for a BBC radio program, Partridge is a product of the modern TV age.

If he was real, he’d probably be Piers Morgan’s long-lost twin, or have his own show on Sky or Fox. Instead he lives on in This Time with Alan Partridge, a magazine-style lifestyle show on the BBC that he ended up co-hosting with Jennie Gresham (Susannah Fielding), after the regular host fell ill.

After bumbling his way through season one and securing himself a permanent co-hosting spot, Partridge is back for more time on the couch, but this time there’s a new, younger producer in charge and he’s worried that change is afoot.

And when Partridge’s back is against the wall, that’s when he’s at his best (read: worst), lashing out at Jennie and his long-suffering but loyal assistant Lynn (played with just the right amount of resignation by Felicity Montagu) and trying to engineer worthy stories that are more about him than the subjects. His stay at a monk’s silent retreat, where he manages to liken himself to Jesus on the cross, is peak Partridge.

How Alan has lasted this long is down to Coogan, who has always actively avoided finding characters that could be described as “nice”. Even when he has dropped Partridge for his more serious acting projects – 24 Hour Party People, Philomena, the Trip series – he’s always had something of the jerk about him. That he has just signed up to play British paedophile Jimmy Savile for a BBC drama tells you everything you need to know about what he looks for in a role.

Like fellow British actor Ricky Gervais, Coogan loves making his audiences uncomfortable, but unlike Gervais, Coogan has never needed to be liked. You may wince at Partridge and his poor treatment of Lynn or his various dating fiascos, but you will never feel sorry for him or want him to succeed. Partridge’s appeal lies in his failures.

Gervais, meanwhile, may have made his Office alter ego David Brent a self-important fool, but he caved at the end and gave him a happy ending – a date who didn’t want to leave and a joke that finally made his colleagues laugh. Coogan has never given Alan Partridge that satisfaction. He’s tortured him through five TV series, plus specials, books, movies, podcasts and live shows.

It’s not just Coogan doing his thing that makes This Time with Alan Partridge work. It has every beat of these magazine-style shows absolutely right: short segments on everything from body language to silent retreats, celebrities promoting books, salty US correspondents (Lolly Adefope), slightly confused techies (Tim Key) and overwrought made-for-TV emotional reunions. It could be Studio 10, Sunrise or Today – they’re all the same, all ripe for parody.

And that’s why I love Alan Partridge. I don’t need to see a glossy winner on morning television. I want the losers, the graspers, the egomaniacs. I want to be entertained. And, in spite of himself, that’s what Alan Partridge does best.