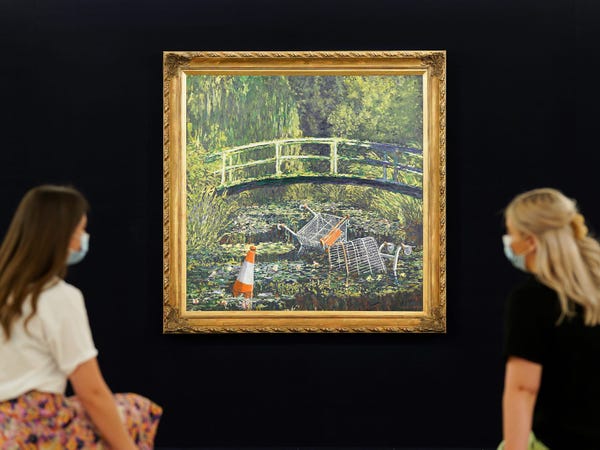 This October, Sotheby's will be auctioning off Banksy's "Show Me the Monet" painting inspired by Claude Monet's famous impressionist work, "The Water Lily Pond" 1899.

In his witty reworking, the elusive British artist subverted Monet's idyllic composition with images of shopping carts and a traffic cone dumped into the pond. Seemingly, the artist was attempting to shed light on pollution and environment damage caused by humans.

Banksy first unveiled the work 15 years ago as part of his exhibition titled "Crude Oils: A Gallery of Re-mixed Masterpieces, Vandalism and Vermin" in London. The free show displayed 22 of the artist's reinterpreted paintings by old masters, subverting not only the compositions but the context of those canonical pieces.

"Show me the Monet" is among several paintings which the artist recreated in his own sardonic light. Banksy reimagined Vincent van Gogh's "Sunflowers" wilting in their vase, Jack Vettriano's "Singing Butler" with two men clad in hazard suits, as well as Andy Warhol's "Marilyn Monroe" re-faced with Kate Moss.

"Show me the Monet" is currently on display at Sotheby's New Bond Street galleries in London before traveling to New York and Hong Kong later this month. It will then return to London for the October 21 auction, having a pre-sale estimate of £3 to £5 million (approximately $3.8 to $6.4 million).

The sale of "Show me the Monet" arrives a year after Banksy's "Devolved Parliament" sold at Sotheby's London for a record breaking £9.9 million ($12.2 million).

In other auctions, a $20 million portrait by Pablo Picasso will lead Christie's upcoming auction of 20th/21st century art.