A tale of teenage misfits offers ‘breath of fresh air’

Every time British writer and actor Michaela Coel starts a new writing project she types ‘How to write a TV show’ into the internet and studies from scratch. 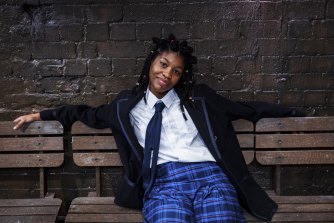 Coel had done neither of those things when she wrote How I May Destroy You, the critically acclaimed BBC and HBO series which won an Emmy in 2021, or her first TV show, Chewing Gum which won three BAFTAs for writing and performance.

Chewing Gum, which aired on Channel 4 and Netflix in 2015, was commissioned after a production of Coel’s 2012 play Chewing Gum Dreams, her drama school graduation project, had a short season at the UK’s National Theatre.

A defiant, funny and sometimes heartbreaking play, Chewing Gum Dreams now has its Australian premiere. A 45-minute one-woman show about Tracey Gordon, a 14-year-old black girl living in Hackney in North London, it is produced by Green Door Theatre Company for the Old Fitz Theatre.

Tracey, a character based on Coel’s years growing up on a Hackney council estate, is a fierce but vulnerable schoolgirl imbued with self-awareness. “I ain’t smart enough to be somebody, but I’m smart enough to know I’m nobody,” she says in the play.

Director Bernadette Fam says Chewing Gum Dreams bears such honesty, vulnerability and profound wisdom it stuns her at every viewing.

“I guarantee people will go through their whole lives without coming to the conclusions Tracey does about the world, about class systems and how it all works,” she says.

“She’s speaking directly to the audience while everything in her life is going at a million miles per hour around her. There are moments where you go, ‘Whoa, whoa, let’s take a second to think about that’. But Tracey’s already moved on.”

Fam feels inspired by Tracey despite the character’s defiant opinions.

“There’s definitely moments where you go, ‘Oh Tracey, why did you do that? Why did you say that?’,” she says. “But I think it’s important to practice empathy for these teenagers who see the world in a very different way.”

Masego Pitso, who plays Tracey, hopes the production gives a sense of solidarity, nostalgia and community to audiences.

“The play isn’t trying to solve anything,” she says. “It isn’t trying to tell you your normal, your everyday is not OK. I think Michaela Coel wrote this so we can see our lives and our experiences on stage and be okay with that.

“It really is that breath of fresh air. From the laughter to the hard bits, it sinks into you, it sits in your bones and feels good, every part of it.“