‘A 12-week sprint’: PM flags plan to vaccinate under-50s in lead-up to Christmas

More than 6 million Australians could be vaccinated in the last 12 weeks of the year in an ambitious plan floated by the Prime Minister ahead of a meeting of state and territory leaders on Monday afternoon.

Scott Morrison also conceded there was a possibility not all states would embrace home quarantine, another milestone he hoped to reach in the second half of the year for vaccinated returned travellers. 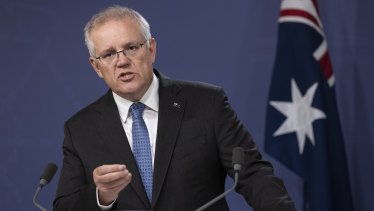 National Cabinet is holding the first of its new bi-weekly meetings to discuss a reset of the country’s COVID-19 vaccine rollout, which could include an early start to vaccinations for people aged over 50.

“There are strong, strong arguments for the bring-forward of over 50s with the AstraZeneca vaccine,” Mr Morrison said on Monday afternoon.

The federal government expects to receive 20 million doses of the Pfizer vaccine from October, as well as doses of the yet-to-be-approved Novavax vaccine. The Prime Minister said he hoped to get the bulk of under-50s immunised in the last three months of the year with the help of mass vaccination hubs.

“There’s a lot of work to be done given that would be effectively, if we wished, a 12-week sprint,” he said. “To be able to do that safely and effectively … there’d need to be plenty of planning to achieve that.”

Almost 1.6 million doses of both the Pfizer and AstraZeneca vaccines have been administered across the country so far. The rollout has proceeded much slower than planned after international supply issues dogged the start.

A change in advice from the country’s top vaccine experts forced the government to shift focus from AstraZeneca to Pfizer for the bulk of the population following a review of the data around a rare but serious side effect from the AstraZeneca vaccine.

Mr Morrison has previously suggested he would like to see home quarantine for vaccinated Australians who travel overseas on essential business introduced in the second half of the year, a position echoed by ministers on Sunday.

But on Monday, he acknowledged there might not be a consensus on that issue.

“I would seek to achieve as much national consistency as we possibly could but you rightly point out that public health is a matter of state jurisdiction and the Commonwealth is not in a position to direct that in any way, shape or form,” he said.

Opposition health spokesman Mark Butler said the Prime Minister must come out of National Cabinet with a new plan for immunising the nation.

“The last one, which had targets like 4 million Australians by the end of March [and] the job done by October, is clearly in tatters,” he said. “We need a new plan with revised timelines and targets – one which ensures that state governments are given confidence by the Commonwealth and they’ll be able to participate more fully in this vaccine rollout.”

Both the NSW and Victorian leaders said the vaccine rollout must be sped up and they were willing to open more mass vaccination centres as long as the Commonwealth provided the supplies.

NSW Premier Gladys Berejiklian said the country needed to be “far less rigid” with the rollout.

“We really need to crank on with it,” she said on Monday morning.

Acting Victorian Premier James Merlino said the state was ready and able to do more in terms of mass vaccination, subject to supply.