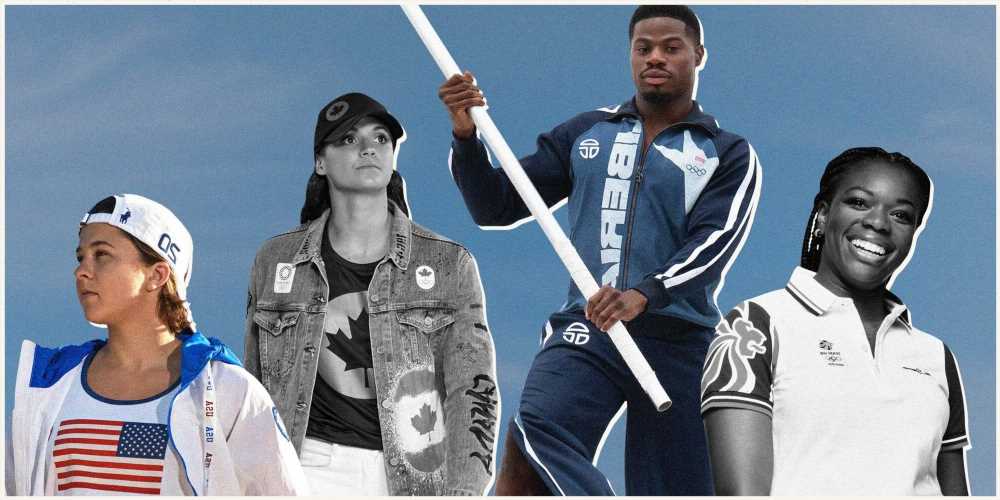 What is more cheugy than writing an article about cheugy-ness three months after the internet slang went viral? A Lacoste polo? Maybe. Skinny jeans? Definitely.

Cheugy is a descriptor meaning "out of touch" or "basic," and was coined in 2013 before going viral on TikTok last spring. The catchall term represents a specific millennial aesthetic that's a touch of "Live Laugh Love," a dash of Joanna Gaines, and a healthy serving of rose gold, all wrapped up and branded as a personality, or worse — as taste.

It was around cheugy's peak internet usage that I began to take notice of the 2021 Olympic uniforms — the shorts! The blazers! The sneakers! All cheugy-er than a gray and white chevron stripe. And while I say this from the pedestal of a fashion magazine, I mean no condescension. That some Olympic uniforms are tacky is an objective fact, a well-chronicled phenomenon.

Of course, fashion is not the point of the Olympics, though there are plenty of athletes who know a thing or two about the industry. (See examples 1, 2, 3.) But for the Opening and Closing Ceremonies, at the very least, it should be possible for style to shine, to showcase the fashion talent from each country while still being inclusive and respectful of the spirit of the Games.

Since 2008, the U.S. Olympic team's uniforms have been designed by Ralph Lauren. And in fairness to Mr. Lauren, they are always exactly what you'd expect from the king of Americana himself. Rather predictably, this year's uniforms include a Polo by Ralph Lauren navy blazer, a horizontal stripe tee, and an American flag necktie. But they also include skinny jeans — the ultimate signifier of cheugy taste.

Fortunately for us spectators, not every country adheres to the design principle "prep school chic." Liberia's uniforms, for example, were designed by Telfar Clemens, the CFDA-award winning designer whose wares have been worn by Beyoncé and did I mention Beyoncé. (He is also sponsoring Team Liberia's trip to Tokyo, and using their uniforms as a jumping off point to start a whole collection of activewear, which kind of makes him the Beyoncé of Olympic uniforms.) But is Telfar cheugy? Read on.

As we approach Friday's Opening Ceremony, I've ranked nine Olympic uniforms from most to least cheugy so you'll know exactly which teams to keep an eye out for. The various elements of this outfit are practically competing with each other for the title of Most Cheugy. Right now, it's a tie between the American flag cravat and the indigo wash denim. I'm all for a pun, but a denim trucker jacket with faux grafitti scribbles and white skinny jeans? I have to draw the line somewhere. Luckily for Canadian athletes, the Levi's Canadian tuxedo is only for the Closing Ceremony. The Opening Ceremony ensembles are notably not denim, nor tuxedos, but a standard athleisure look featuring the iconic maple leaf. Another day, another Olympic uniform that might double as the uniform at an expensive private school. Like Ralph Lauren, Lacoste appears to be sticking to tried and true staples: Polos, windbreakers, and prominently featured logos. Ben Sherman's collection of '60s collegian-inspired looks have many of the same elements as the Americans' uniforms, but the execution is radically different. The modern cut of the shorts, the lion motif details on the polo sleeves, and the psychedelic, Rubber Soul-esque font make the uniforms feel both modern and representative of Britain's artistic heritage.

Per an agreement with the World Anti-Doping Agency (WADA) following the state-sponsored doping scandal of the 2014 Olympics in Sochi, Russian athletes will not be competing under their country's banner. Rather, they will represent the Russian Olympic Committee; as such both the tri-color flag and Russian anthem are banned at international competitions until 2022.

That said, the athletes will still wear red, white, and blue uniforms by Zasport, which whipped up boxy, monochromatic suits with track stripes running along the trousers. The rest of the collection includes wraparound sunglasses, fanny packs, and other Russian streetwear staples that would make any hypebeast drool. When designing the uniforms for the Czech Republic, Zuzana Osako had a lofty goal in mind: To find a connection between the culture of the Czech Republic and that of 2021 Games' host, Japan. The result is a gymnast motif inspired by the Czech blueprint technique, which itself is a derivative of the Japanese blockprint.

The traditional cut of the uniforms as well as the fan accessory is bound to help the Czech athletes stand out in the crowd. And there's nothing less cheugy than daring individualism. Clemens, whose parents are Liberian, not only designed fashion-forward Olympic looks (are those tear-away pants? One can dream.), but will create an entire collection of athletic wear based on his Olympic designs. It really doesn't get more anti-cheugy than athletic apparel served up on a direct-to-consumer platform.