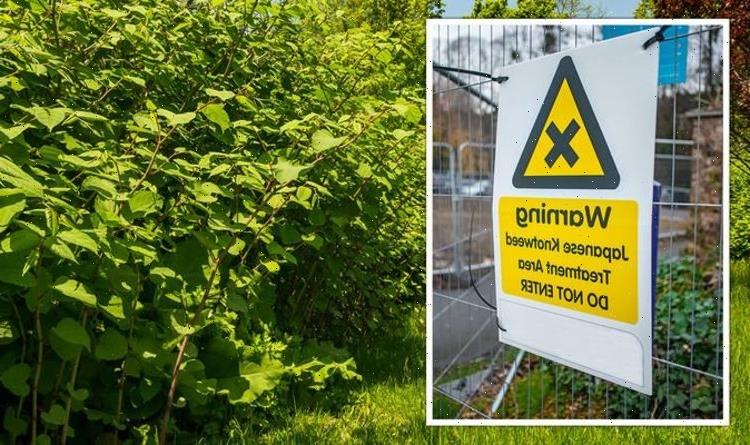 A study, which looked at National Biodiversity Network figures from 49 local authorities in Britain, found that the invasive weed has spread like wildfire across the country. The troublesome plant species was originally imported into the UK from Japan back in the 19th century. It was originally thought that the plant would stabilise and add natural beauty to railway embankments.

However, the plant spread rampantly with more than 29,000 cases being confirmed over the last five years.

Although it is not illegal to have the plant on your property, it is against the law to allow it to spread into the wild or onto a neighbouring property.

Homeowners who allow this to happen can face hefty fines or even be taken to court.

Japanese Knotweed is also particularly difficult to remove due to its complex root systems.

It usually costs homeowners or land owners a significant amount of money to remove the plant completely.

The plant can also make it very difficult to sell your property.

Four in five individuals claimed they would not buy a property that was infected with the plant.

A further two-this of buyers would want a discount of around five to 10 percent.

DON’T MISS
Alan Titchmarsh issues autumn garden tips as weather changes [INSIGHT]
How often should you wash bedding? [UPDATE]
Queen’s initiative ahead of milestone to be marked this month [ANALYSIS]

Shockingly, 12 percent of the 907 UK homeowners surveyed by YouGov had never heard of the invasive weed.

Nearly half (47 percent) also claimed they did not know what the plant looked like from a line-up of plant images.

Dean Wilson from Horticulture.co.uk said if you are looking to buy a property, you need to instruct a surveyor to check for Japanese Knotweed.

He said: “When instructing a surveyor for your new home purchase, always ask them to look for Japanese Knotweed and other invasive plants.”

He continued: “This is especially important if the property borders an old or existing railway line, or is close to a river, canal or stream – where the plant is known to spread via small fragments of root that work their way downstream”.

According to the data, there are a further 19,702 unconfirmed cases of Japanese knotweed.

There could be thousands more cases in the UK which are likely to remain unreported.

Horticulture.co.uk have launched an interactive map where residents can pinpoint confirmed cases of Japanese Knotweed in their local area.

Looking for a new home, or just fancy a look? Add your postcode below or visit InYourArea

Which regions have the most confirmed cases of Japanese Knotweed in the UK?

Over the last five years, South Yorkshire has seen the most confirmed live cases with a more than 77 percent increase in the past five years.

In the last five years, the national average of confirmed cases has soared to 29,536, a 27.91 percent increase.

UK regions with the most growth in live cases over the last five years: