Wisteria is one of the most beautiful climbing plants that is loved for its striking display of scented flowers. One essential step to keep wisteria flourishing in April, May and June is to prune the deciduous growth at the right time of year, and most importantly, to cut the shrub back correctly. July is a crucial time for wisteria pruning – and this is everything you need to do to keep the plant thriving until next year.

How to prune wisteria

A gorgeous array of lilac blooms are most likely to appear on your wisteria plant between mid-spring and early summer. While this striking plant flowers early in the warm season, the peak of summer is the best time to undertake some essential pruning to keep the plant healthy.

According to the Royal Horticultural Society (RHS), wisteria should be pruned in July or August to allow “better air circulation”, cutting the growth back to around five or six leaves once the plant has finished flowering.

Summer pruning should be focused on removing the “whippy green shoots” which appear in the current year’s growth. 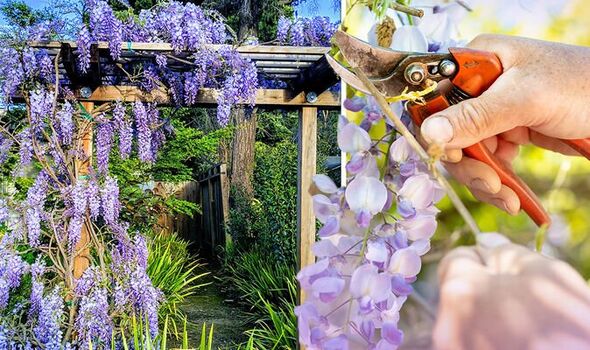 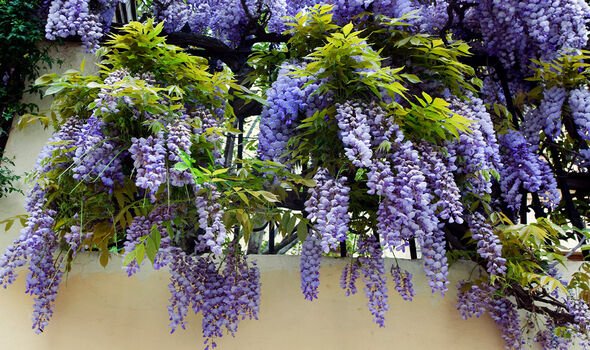 It is best to prune hard at this point in the year in order to restrict and cut back the vigorous growth, so the plant will throw out new flower shoots in the spring. Always leave around 15cm of growth as this is needed for the framework of the shrub.

The Sunday Gardener recommended removing the “laterals” at the base of the plant as well as the whippy growth. These “shoot out” from the bottom of the wisteria framework.

According to the RHS, pruning hard in the middle of summer helps to control the size of the wisteria, which is known for its “vigorous growth”.

It also helps to prevent it from getting into guttering and windows, and encourages it to form flower buds rather than green growth. 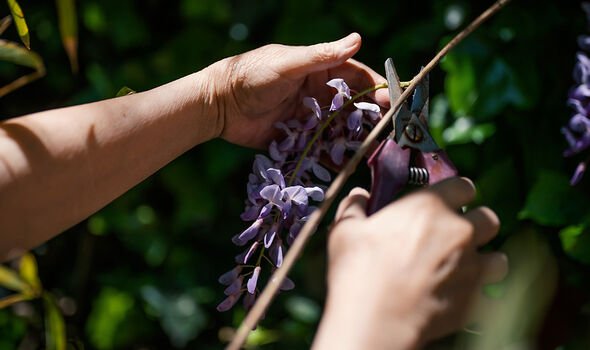 Should wisteria be pruned more than once?

Wisterias can be left to ramble where space allows, but twice yearly pruning is recommended to make space for new growth to appear from April.

In addition to the summer prune, winter pruning is also advised, according to the RHS.

This should be done in January or February when the plant is dormant.

During this time, the wisteria will appear leafless and ready to be ‘tidied up’.

To prune wisteria in winter, simply cut back the framework to around two or three buds on each growth.

The second prune ensures that flowers are not obscured by leaves and are able to flourish when the blooming season begins.

DON’T MISS:
How to achieve the ‘best results’ when pruning blueberry bushes [INSIGHT]
‘Make straight cuts’ when pruning the instead of slanted – here’s why [REVEAL]
Monty Don shares how often to deadhead roses in summer [ANALYSIS]

Why is pruning important?

Pruning deciduous shrubs like wisteria is crucial to control the growth and stop the woody stems from becoming overcrowded.

Summer pruning is important to improve circulation and open up the plant to more sunlight.

When this is done, the base of young growths will thrive and the wood will ripen.

According to the RHS, the main reason for pruning wisteria is to improve the chances of flower bud formation.

It said: “Restricting the amount of vegetative growth and encouraging short, flowering spurs will result in more flowers.”