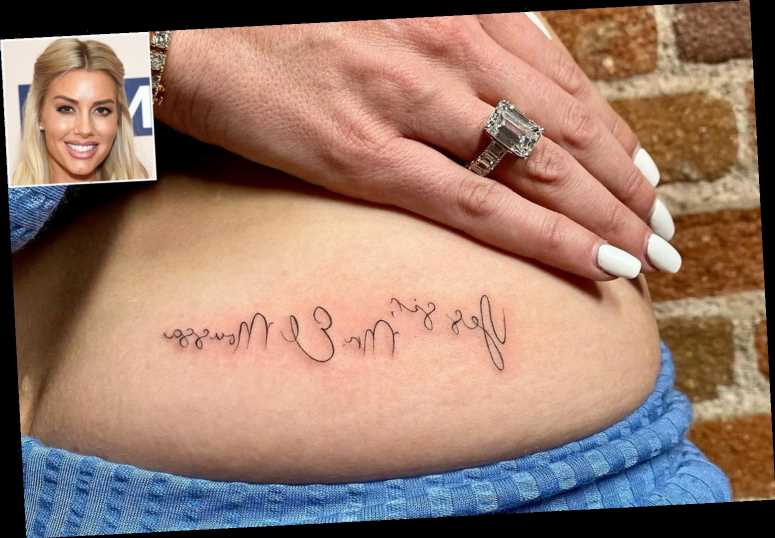 Heather Rae Young is addressing her decision to get a tattoo of her fiancé Tarek El Moussa's name on her backside.

On Monday, the Selling Sunset star revealed she got a tattoo as a Valentine's Day surprise for her future husband, which reads "Yes sir, Mr. El Moussa" in script.

Young, 33, showed off the tattoo of El Moussa's name as a Valentine's Day gift for her husband-to-be.

She's since deleted the post after it went viral, but not before El Moussa, 39, replied to the photo of his special gift, writing, "Forever and ever and ever❤️❤️❤️❤️❤️❤️"

On Tuesday, Young shared some videos from her tattoo experience and explained more about her decision to get the ink on her Instagram Story.

"Obviously you guys all saw that I got a tattoo, so I'm gonna post a cute little video that I did right before I got that tattoo," she says in the first video.

She then posted videos she took on Monday from the studio with her tattoo artist, Sean Arnold, describing her "special Valentine's present" for El Moussa.

"So this man over here, his name is Sean Arnold, and he's doing a tattoo for me," she says as she spins around to show Arnold in the frame.

"It's very meaningful because I'm doing it for my fiancé," she continued, describing why she decided to get the new ink. "It's something that's just for us, so you might not see it. But this guy right here is going to hook me up."

Young said she was "really, really nervous" to get the tattoo, but the energy in the studio was "really calming."

"[Arnold] lit some Palo Santo," she said. "He has crystals everywhere."

In the original post, Young also gave fans another look at the new band she received for her 8-carat diamond engagement ring in the photo.

Last week, Young revealed that El Moussa purchased the "breathtaking" new band for her and that the pair "designed it together." Alongside a close-up Instagram Story video which showed off every angle of the gorgeous sparkler, Young explained that she's been thinking about her "dream" ring for years.

Ending with a loving note to El Moussa, she added, "My love, future hubby, you have my whole heart."

El Moussa and Young got engaged on July 25 while celebrating their one-year anniversary with a boat trip to Catalina Island in California.

Although the couple have been busy planning their nuptials — including Young documenting her hunt for the perfect wedding rehearsal dress — they've stayed mum about when they'll be saying "I do."

Seemingly dropping a hint during a recent episode of the new discovery+ series HGTV House Party, El Moussa said that he thought Young believed September will be the best month for the pair to tie the knot.

"Depends on location, whenever the heat isn't too bad," Young's open-ended answer read, to which her fiancee replied, "That's why I said September."