Tomatoes ripen most quickly in a warm, light environment. The best flavours are said to come from tomatoes “ripened on the vine”, meaning they are picked from the plant after they have ripened. Nothing beats the taste of freshly picked ripe tomatoes which are, without question, infinitely superior to shop-bought produce.  However, as the season draws on and temperatures start to drop there are invariably lots of green tomatoes left on the plants that don’t quite ripen in time. Rather than wasting them, why not try some easy techniques to ripen these fruit?

Trick one: Pinch off the top of the plant

This trick is great for gardeners who are only a few weeks away from the first frost and still see a fair amount of green tomatoes on the vine.

Linda said: “The best way to promote faster ripening is to pinch off (cut) the top of your tomato plant. Just remove the tip of the main stem above the topmost blossom. This prevents the plant from growing any taller and producing more flowers.

“I also like to remove any green fruits that haven’t yet reached their mature size. Without its resources being wasted on growing fruit to full size, the plant can channel its energy into ripening the fruit it’s already produced.

“Some studies have shown that reducing the number of fruit not only speeds up ripening, but also improves the size, flavour and nutrient content of the harvest.” 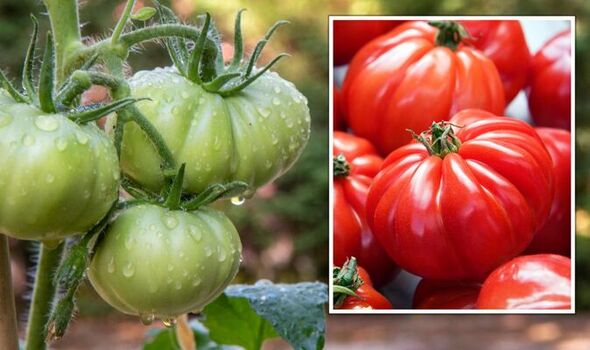 One “easy way” to encourage tomatoes to “ripen faster” is to induce stress, according to the gardening pro.

She explained: “If tomato plants sense that their survival is at stake, they’ll speed up the maturation of their fruits to produce seed and create the next generation of plants.”

Gardeners can induce stress simply by reducing the amount of water they give them. Do this gradually to allow the plants to adapt, giving less and less water each time over a three-week period.

Avoid stressing the plants too much at first as this could cause blossom end rot, split fruits or cracks. This intentional withholding of water is similar to a growing technique known as dry farming, which commercial farmers use to improve flavour.

The fruits end up smaller than tomatoes left to ripen on the vine under normal conditions, but restricting the plant’s water intake increases the fruits’ sugar content and other flavour compounds, resulting in sweeter and richer tomatoes.

Linda added: “So, this trick could give you a tasty bonus in addition to helping your fruits ripen sooner.”

However, it is worth noting that simply not watering these plants is not an ideal way to grow tomatoes. A successful crop of dry-farmed tomatoes has to be dry-farmed from the beginning under specific climate and soil conditions.

Another “easy way” to induce stress is via root pruning, which interrupts the plant’s growth cycle. The gardening guru explained: “This special technique hampers the plant’s absorption of water and sends out distress signals, telling it to hurry up and ripen the tomatoes it’s produced.

“To do this, simply insert a spade six to eight inches deep into the soil, about one foot away from the main stem, and move it in a circle around the plant. 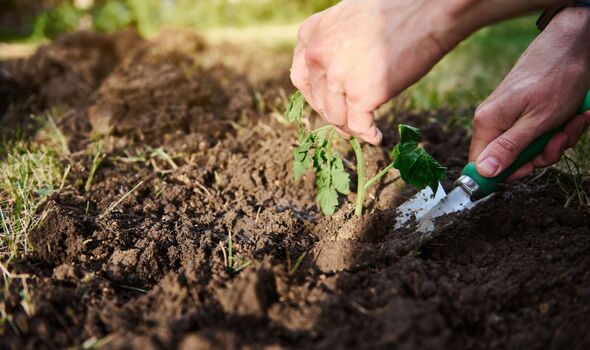 “This will cut the outermost roots, putting the plant into survival mode and forcing it to mature more than it would otherwise.”

Generally, the best time to root prune a tomato plant is after the first few clusters of fruits have developed, but just before they begin to ripen.

Linda added: “I usually do this three to four weeks before the first frost in my area, though timing may differ for your garden and climate.”

Combine root pruning with reduced watering, as mentioned in the previous trick, and the work at the end of the season will reward gardeners with better-tasting, more nutritious fruit and less waste in the garden.

If a sudden early frost has gardeners bringing all their unripe tomatoes indoors, they can speed up ripening by placing their tomatoes in brown paper bags with a bit of apple peel inside. 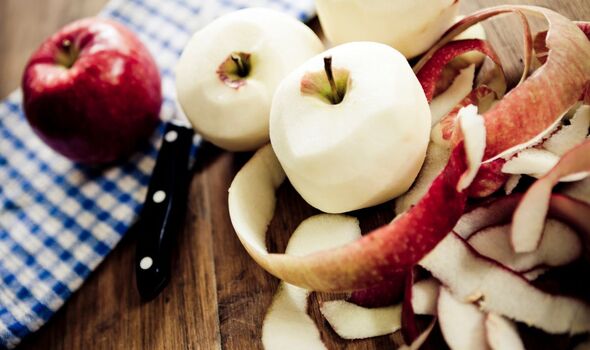 Apples emit high amounts of ethylene, a colourless, odourless, naturally occurring gas that causes the flesh to soften and the sugar content to rise – a process known as ripening.

The gardening expert said: “With the aid of ethylene, your green tomatoes should ripen within a week, versus the two weeks it would normally take mature green fruit to reach ripeness.

“The key to ripening tomatoes properly indoors is to always pick mature green fruits. These are the ones that have grown to full size and may already have a slight tinge of yellow on the outside.

“If you cut into a sacrificial piece of fruit, you should see a gelatinous texture and some type of colour shift on the inside.”

Mature green tomatoes have the best chance of ripening off the vine. Sort and separate yours according to stage of ripeness, as it’ll help recognise when each batch is ripe and ready by checking only a few test fruits instead of needing to open and check the whole bag.