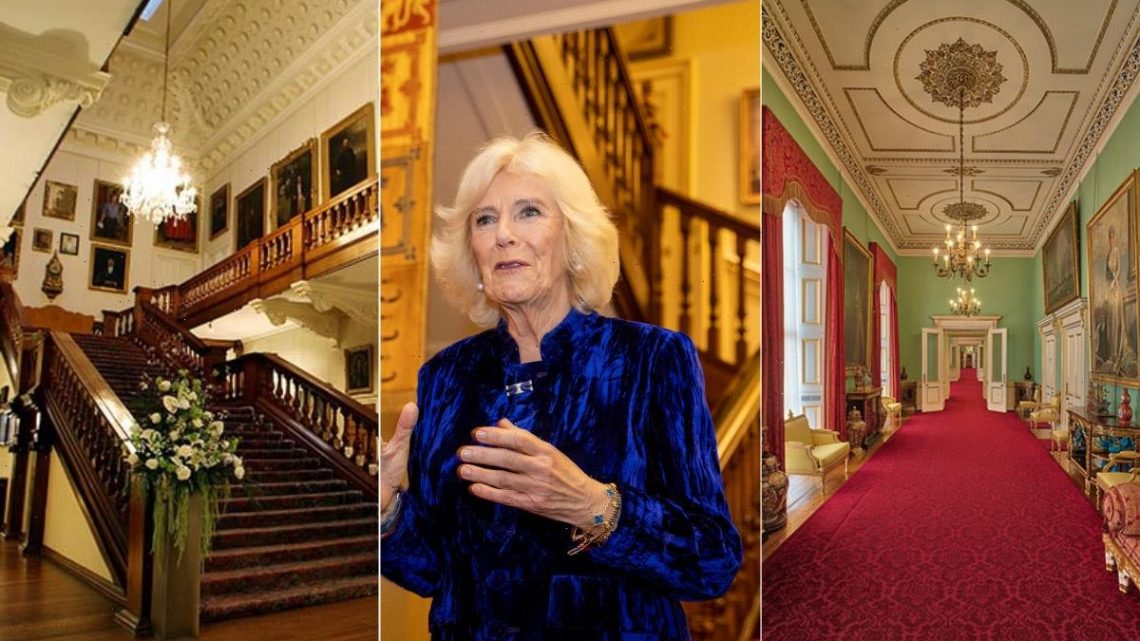 Royal residences impress us with their private swimming pools, acres of land and mesmerising dining rooms, but an often overlooked space is the hallway and these grand places deserve some serious attention.

WATCH: Inside the most majestic royal homes

Princess Diana’s brother Charles Spencer still lives at the Spencer family home, Althorp House. The Saloon makes a grand hallway with a large staircase with wooden bannisters and chandeliers, and paintings in gold frames hanging on the walls.

The Queen’s main royal residence is Buckingham Palace in London, and inside is every bit as incredible as you’d expect. The Principal Corridor is decorated with lime green walls, red baroque carpet and matching curtains.

There are high ceilings with gold carvings and, when the property was undergoing renovations, it was reported that there were over 3000 pieces of art in the hallway.

SEE: The most jaw-dropping royal doorways of all time

The Queen’s second home, Windsor Castle’s Grand Corridor is 137 metres long and 4.6 metres wide. The Queen was photographed in the space alongside President Donald Trump and his wife Melania Trump when they visited the UK in 2018. It displays hundreds of pieces of art work, and a painting of the corridor that was released in 1846 shows that it has stayed almost exactly the same since.

Windsor Castle also has St George’s Hall, where Meghan Markle and Prince Harry posed with their newborn son Archie Harrison Mountbatten-Windsor in May 2019. While the space does connect rooms in the house, the hall also acts as a setting for state banquets and official dinners.

It features vaulted ceilings, wooden wainscoting on the walls and a grand red carpet on the floor. There are various plinths showcasing ornaments at either side.

Prince Charles and Camilla previously shared a look at the corridor in their main London residence Clarence House at Christmas. It’s decorated with cream walls and red carpets, with several pieces of art in gilded gold frames along the walls. The stairs have a wooden bannister, and there is a fabric mural hanging overhead.

Granted, it may not be the most majestic hallway, but when TV hosts Ant and Dec visited Prince Harry and Prince William to film their documentary, When Ant And Dec Met The Prince: 40 Years of The Prince’s Trust, the episode unveiled a debut glimpse inside their corridor at Kensington Palace. It features a simple white colour scheme, with a black lantern style lampshade.

Royal fans got a peek inside Prince Andrew and Sarah, Duchess of York’s family home in a behind-the-scenes photo from Princess Eugenie’s royal wedding. The mother of the bride posed in a hallway with cream carpets and green walls covered with framed family photos.

Before Meghan Markle and Prince Harry found their permanent home in Montecito, they were temporarily living at Tyler Perry’s home in LA. A video previously shared by Tyler in the house revealed that the corridor features arched ceilings, wooden floors, cream walls and several glass and wooden lampshades, coordinating with the wooden door frames.

Crown Princess Marie-Chantal of Greece previously took HELLO! inside her New York home for an exclusive tour, where she lives with her husband Crown Prince Pavlos and their five children. The property dates back to 1913, and while the family have modernised certain areas, Marie-Chantal kept a retro feel in the hallway, with patterned stairs and an antique chair.

MORE: Kate Middleton’s plush homes before she was royal revealed