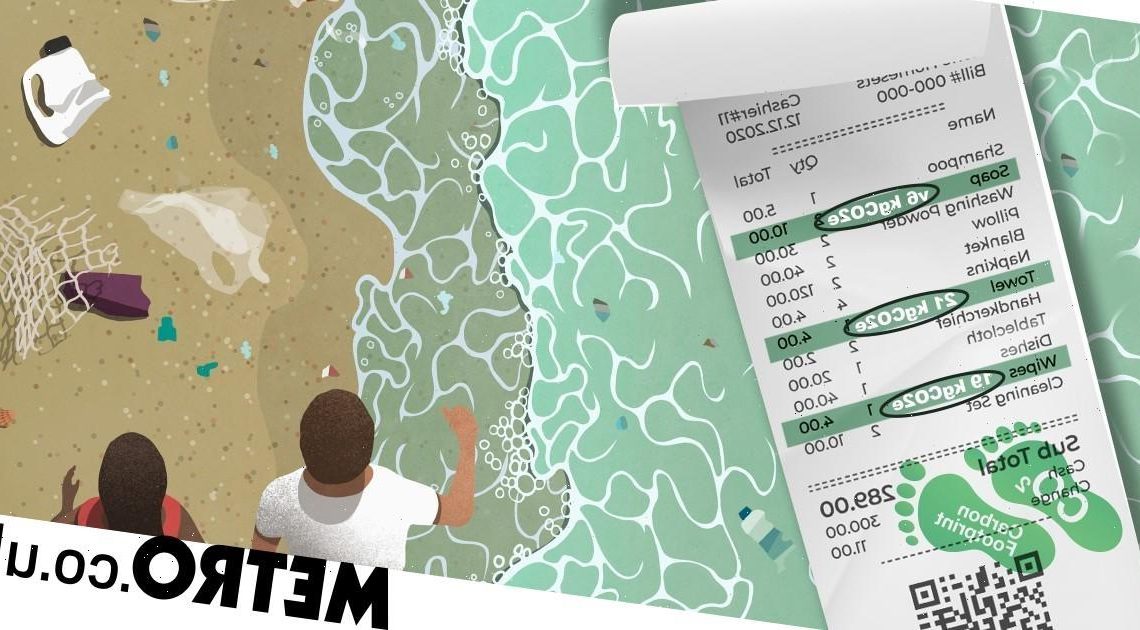 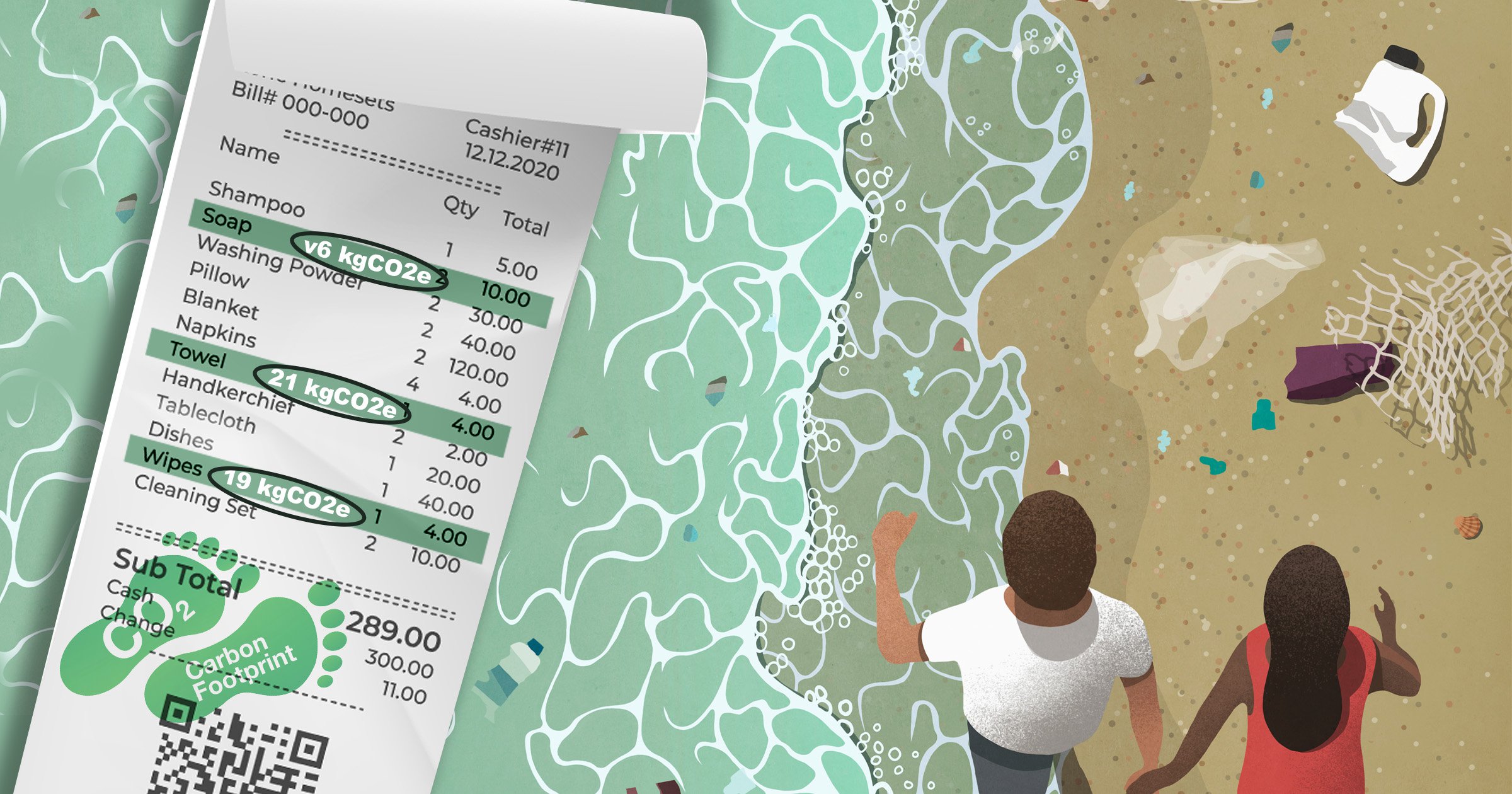 At COP26, hungry diners were treated to a food menu that listed the carbon footprint next to each item available to order.

The menu – nearly 60% of which was meat and dairy dishes – was mocked online, with Joel Scott-Halkes, a spokesperson for campaign group Animal Rebellion, calling it ‘like serving cigarettes at a lung cancer conference’.

But meat choices aside, could a menu or receipt that lists the environmental impact of what you’ve bought be an idea that could work beyond the climate conference?

A climate receipt can take shape in many forms – it can be a QR code, which once opened details the environmental impact of the item, or it can be digitally sent via email, or in some cases come out on paper like a traditional receipt (although, this is less eco-efficient).

Oda, a European e-grocer, has been using climate receipts successfully for one year.

In January 2021 the company began providing shoppers with carbon receipts to show consumers the footprint of the goods they buy.

Karl Munthe-Kaas, CEO and founder, tells us many of his customers have ‘asked for a way to see climate emissions from their groceries’.

‘They report that it is difficult to make sustainable shopping decisions,’ he says.

‘There is still also no standard marking or reporting of climate emission from food products.

‘This is a real challenge since consumers subsequently miss the chance to make climate-conscious choices. How can consumers make positive choices if they don’t even get all the info?’

Emissions are calculated using a ‘lifecycle perspective’ (from day the food item is planted or created to day it is consumed) with the Center for International Climate Research.

Items are ranked red, yellow and green in a similar way nutritional details are labelled on regular food packaging.

Karl says he’s had ‘great feedback’ from customers, and since implementing the receipts, sales of vegetarian meals have grown, which typically have a lower carbon footprint.

Meat substitutes are also growing by 80% since the carbon receipts were introduced.

‘We know that some customers use the tool actively to learn about product climate impact and to evaluate what they buy. However, we have yet to analyse the full effect on purchasing decisions,’ he says.

Helen Ashton, founder of business consultancy Shape Beyond, says that the efficacy of climate receipts will be influenced by the demographic of the consumer.

‘What’s interesting is the dichotomy that faces them,’ she says, taking fast fashion as an example.

‘For younger consumers, social and environmental issues are absolutely front of mind and as conscious consumers, they want to align themselves to brands which reinforce their own beliefs and values.

‘However, at the same time, social media, influencers and the rise of “affordable” brands has intensified how quickly fashion product is consumed, with the idea of being seen in the same outfit twice on social media unimaginable.

‘Some younger consumers no doubt would rein in their consumption if they understood more about the realities of a historically opaque industry, however many would continue regardless, leaving their environmental scruples at the checkout.’

Johnstons of Elgin, a luxury cashmere brand, has signed up to take part in a QR code scheme that is yet to launch.

Simon Cotton, chief executive, says the brand want to implement this technology because ‘the wish for consumers to know how their products are made has never been higher’.

Consumers have expressed this wish, and a QR code climate receipt ‘allows us to tell those stories’.

He hopes it will ’empower consumers to make more sustainable choices’.

Clearly, there is a curiosity among shoppers to know more once the information is made easily available.

‘Consumers these days will ask about everything you can imagine.

‘These are complex topics and because we are looking at environmental and social issues right through our product offer, there is a huge amount of data which can be shared.

‘Every consumer has their own unique questions which they, very rightly, want to have answered,’ Simon adds.

Working across food, fashion and a number of other wholesale categories, climate receipts even work for delivery services, as tested by nShift, who let people know the carbon footprint of the delivery option they pick.

Jennifer Nadel, co-director of Compassion in Politics, tells us ‘systemic changes’ are something the public will likely embrace – so this kind of approach could genuinely effect change.

‘Our research suggests the public are ready for that level of change,’ she tells Metro.co.uk.

‘Almost half of the people we surveyed said they want the government to tackle climate breakdown with the same degree of urgency that was shown in response to the Covid pandemic.

‘So yes, we would expect the public to shift their purchasing decisions as a result of the introduction of carbon receipts – most people recognise the severity of the climate crisis and are keen to do their bit to mitigate it.’

Though, this shouldn’t be where action ends.

Jennifer continues: ‘We fear that such an approach places an undue burden on individual consumers – some of whom may have little choice about where they shop and what they buy.

‘Rather than giving buyers the option to choose a low-carbon item, every product should be designed to be as sustainable as possible.

‘Doing so would not only be more effective, it would also communicate to the public that everyone is committed to stopping climate breakdown. The risk of encouraging individuals to make “greener” choices is that it isolates them from the collective effort. That way lies despondency.’

Given how new these initiatives are, the scale of their impact is yet to be determined, but making the data accessible is sure to intrigue consumers.

Where they have been put into place, it seems people are paying attention and businesses have noted some degree of change in their shopping habits.

Climate receipts might be the way forward for informed, environmentally aware shopping.

Celebrities who served in the military
Entertainment