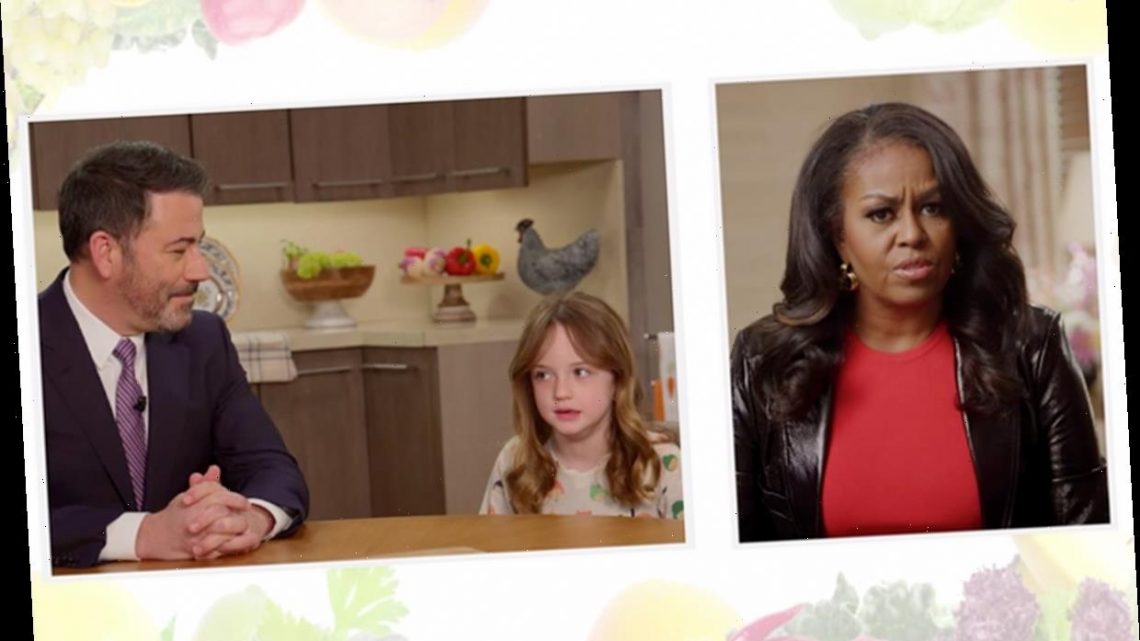 Michelle Obama is continuing her mission to get all children to eat healthy — no matter how stubborn they may be.

"So Jane, why don't you like vegetables?" Obama, who was an advocate for healthy eating during her eight years in the White House, asks Jane.

"'Cause," Jane says in hesitation while sitting beside her dad, "I don't really like to try new things."

Obama then says she can relate to Jane's distaste for vegetables as a child.

"I know, I was like that when I was your age," the mom of two says. "But here's what I learned: If you try something new, just try it, that you open up your taste buds and then you'll like a whole bunch of new things." "So, can I get you to try, just try, a vegetable?" Obama asks as Kimmel, 53, places a plate of carrots in front of his daughter.

But Jane isn't interested in, as Obama previously put it, opening up her taste buds.

Obama is exploring healthy eating in her new Netflix kids cooking series, Waffles + Mochi. The show, which dropped on the streamer Tuesday, follows Michelle in an unexpected role, starring alongside puppets and guest chefs who teach kids to prepare healthy foods.

"Waffles + Mochi, the entire concept is fun. It's approachable, it's an adventure, it's exciting, it's funny," she told PEOPLE last week. "More importantly, it's something that I would watch even if no kids were around." Obama both stars in and executive produces the show. According to Netflix, the series follows two puppets named Waffles and Mochi who "blast off on global ingredient missions, traveling to kitchens, restaurants, farms and homes all over the world, cooking up recipes with everyday ingredients alongside renowned chefs, home cooks, kids and celebrities."

As an honorary chair of Partnership for a Healthier America, she told PEOPLE that while Waffles + Mochi is meant to be "fun and educational" it also will "make an impact on hunger."

Tune into Jimmy Kimmel Live! at 11:35 p.m. ET on ABC to see if Jane gives into Obama's vegetable pleas. Virgin Voyages to require all crew, passengers to be vaccinated for COVID-19 on all cruises