This Whipped Coffee Recipe From TikTok Is A Luxurious Sip

Get ready to switch up your morning routine, because there’s a new trending coffee creation. This whipped coffee recipe from TikTok is going viral for good reason. It’s basically an upgraded version of coffee with a super fluffy texture.

TikTok creator @iamhannahcho, aka Hannah, shared a recipe for whipped coffee on Tuesday, March 10. If you’re not familiar with it, whipped coffee is a take on the popular morning beverage, and it combines instant coffee, sugar, and water. Rather than brewing the stuff, you actually whip it all together until you have stiff peaks similar to the texture of whipped cream. Hannah showed exactly what the 20-minute process looks like in another video shared on Sunday, March 15. The video highlights the ingredients going from a pudding-like consistency to the light and fluffy coffee creation trending on the app.

Whipped coffee is popular in places like India, Pakistan, and Macau, but the latest iteration of it came from South Korea, thanks to a January 2020 episode of Fun-straunt, a Korean TV show. In South Korea, whipped coffee is called "dalonga coffee" for its similarity to a Korean honeycomb toffee. The recipe has since been floating around on YouTube, and it made its way to TikTok shortly thereafter.

There is a bit of work required to get that soft, fluffy texture. The mixing process is time-lapsed in Cho’s video, but she said it took her 20 minutes by hand. You could also use an electric mixer to get it done a bit faster. If you want to give it a try yourself, you can follow Cho’s recipe: 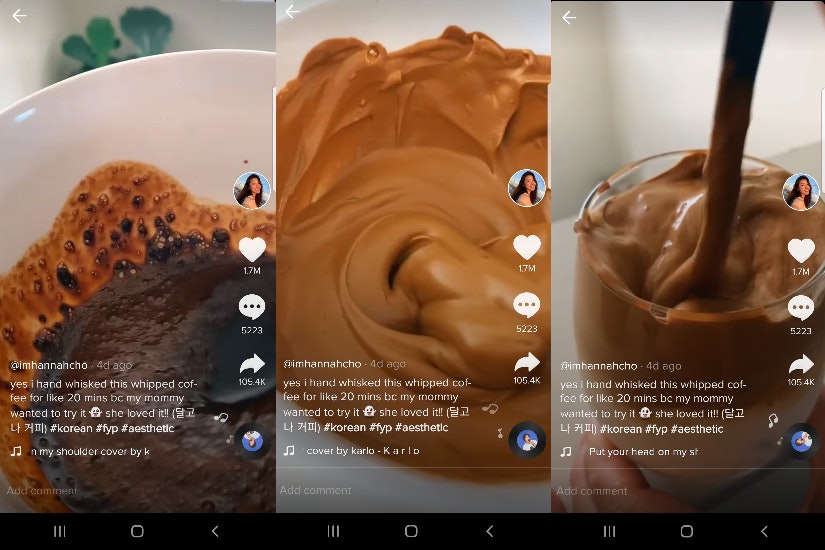 It may not be the Renegade or Flip The Switch, but whipped coffee definitely sounds like the tastiest TikTok trend of 2020 so far.

Too Much Going On???