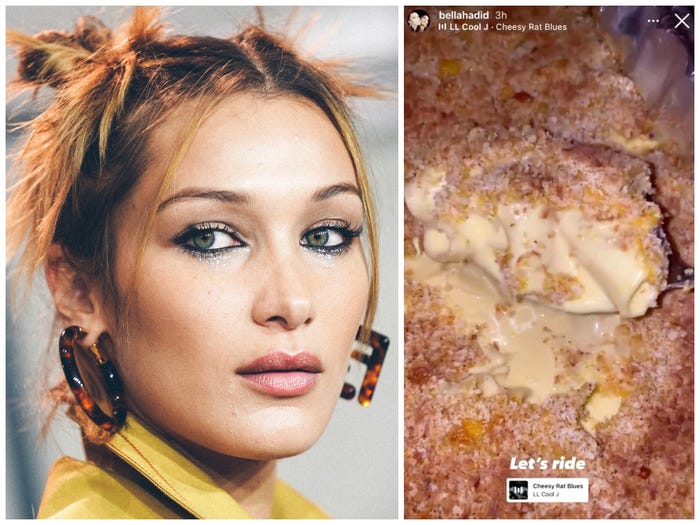 Bella Hadid may be considered one of the most beautiful people in the modeling world, but her soupy Thanksgiving mac and cheese isn't enjoying the same level of praise.

The supermodel gave her 35.8 million Instagram followers an inside look at dinner prep for Thanksgiving on Thursday. She uploaded a series of videos showing how she prepared the mac and cheese, which unfortunately backfired when people saw the finished product.

"It's not meant to be that wet," one Instagram user wrote.

"Girl won't even get in the door with that cheese milk at my house," another person said.

Hadid detailed her cooking process on Instagram, which only made the trolling worse

Hadid started off by cooking the pasta al dente, so it doesn't get "mushy" later on in the process, and topped it with panko bread crumbs and grated cheese. She also appears to use rigatoni pasta instead of the elbow macaroni more commonly used in mac and cheese.

By the time she served it up, the rigatoni pasta could be seen swimming in a pool of cheese and covered with bread crumbs. Hadid added the caption "let's ride" to the short video.

A number of people commented that they thought it was some type of dessert, like banana pudding or lava cake, instead of savory mac and cheese.

"Is that a cinnamon and sugar crust on the top ???" a follower wrote.

Twitter's feedback was just as harsh, with some users joking that Hadid's failed mac and cheese made their own cooking look stellar in comparison. "I really hate I had to see Bella Hadid's Mac n cheese," one tweet read.

While Hadid was trolled over her mac and cheese, her older sister Gigi's spicy vodka sauce went viral for the right reasons earlier this year

The Hadids are clearly big fans of pasta. When Gigi gave fans a tour of her "passion project" New York City home on Instagram in July, one detail caught everyone's eye — Gigi has kitchen cabinets stuffed with multi-colored pasta, purely for decoration.

The cabinets were designed by artist Linda Miller Nicolson, who has also worked with other Hollywood A-listers like Matthew McConaughey and Katy Perry, according to People magazine.

However, the feedback wasn't all bad, with some calling Gigi's "tacky pasta cabinets" cute.

Billie Eilish reveals she got her 1st tattoo this year, but don’t expect to ever see it

The most dangerous countries in the world for 2021 revealed
Entertainment