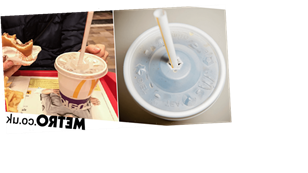 When you order a soft drink at McDonald’s the lid helps to stop spillages, but it also allows staff to check what’s inside.

You might have spotted some buttons on the top that are sometimes pushed in.

And if you haven’t figured out the pattern, some staff who worked there have revealed the answer.

There are four buttons on top and if one is pressed down the drink is diet but if two or more are pressed, the drink is zero.

It means both staff and the customer can figure out which is which if several people order different versions of the same drink.

One customer wrote on Reddit: ‘My question is about the McDonald’s drink lids which have the ‘buttons’ on them. I just ordered two drinks, one diet coke and one coke classic, and on one of them had the number ‘1’ button pressed.

‘The buttons are the numbers 1 and 2, no caff, diet/light. The only one pressed was the number 1. Which one is diet? Should they have just pushed the diet one in?

‘The number 1 means nothing to me but is important I know which is which. Thank you!’

Employees replied to the thread clarifying the rules around the lids.

One said: ‘Yeah seems to be different for every store but we usually just push 1 random button for Diet Coke and then either 2 random or all 4 buttons for Coke Zero.

‘It’s just faster to push random buttons than spend the time to actually find the diet button on every lid I guess.’

A second employee added: ‘We press one for Diet and either two or four for Zero.’