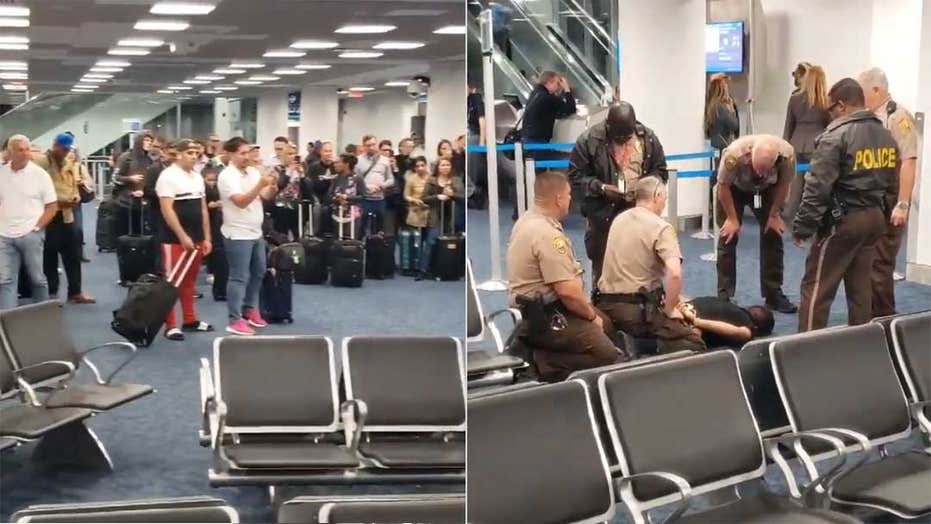 A passenger who attempted to rush onto an American Airlines flight at the Miami International Airport has reportedly been detained at a hospital for a mental evaluation.

The man — a ticketed passenger, according to American Airlines — was seen running past the gate agent and onto the jet bridge before eventually making his way onto the aircraft, according to travelers who witnessed the scene on Monday morning.

“I was on a flight to NYC (American Airlines 1060 to EWR) and a guy ran into the plane screaming that it was his plane and he's FBI,” passenger Ari Teman wrote on Facebook. “The crew called for security, who had to take him off.” 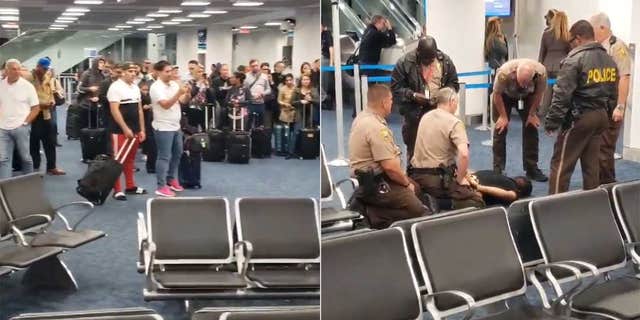 Passengers at the Miami International Airport look on after the man was removed from the plane and detained by police on Monday morning.
(Ari Teman via Storyful)

Teman added that he believed the man may have been faking his outburst, as he seemed “lucid and controlled” throughout the incident.

Another passenger inside the cabin also shared video to Instagram, showing passengers blocking the man from further entering the cabin. The passenger who shared the footage also claimed it took 10 minutes for airport security to come remove the man.

American Airlines confirmed that airport police did eventually remove the man from the plane.

"During the boarding process of American Airlines flight 1060 from Miami to Newark, a ticketed passenger for that flight ran on the jetbridge, bypassing the gate agent,” the airline shared in a statement to Fox News. “Law enforcement was summoned, who removed the passenger."

All passengers inside the plane were then told to disembark to allow a sweep of the aircraft, another airline representative confirmed.

“The plane was subsequently searched for damage and contraband, firearms, explosives, et cetera, and the plane was searched and all clear,” American Airlines spokeswoman Alexis Aran Coello told the Washington Post.

Footage taken from back at the gate, filmed by Teman, shows officers restraining the man in front of travelers inside the terminal.

The man was detained and brought to the Jackson Memorial Hospital for a mental evaluation, CBS4 reports.

A representative for the Miami-Dade police was not immediately available to comment on the man’s current status.

Monday’s incident comes just days after a woman managed to board a Delta Air Lines flight at the Orlando airport without any boarding pass or ID. She was later removed by police.

Why Brie Larson Took on ‘Just Mercy’: ‘It Just Gave Me This Fire Inside’