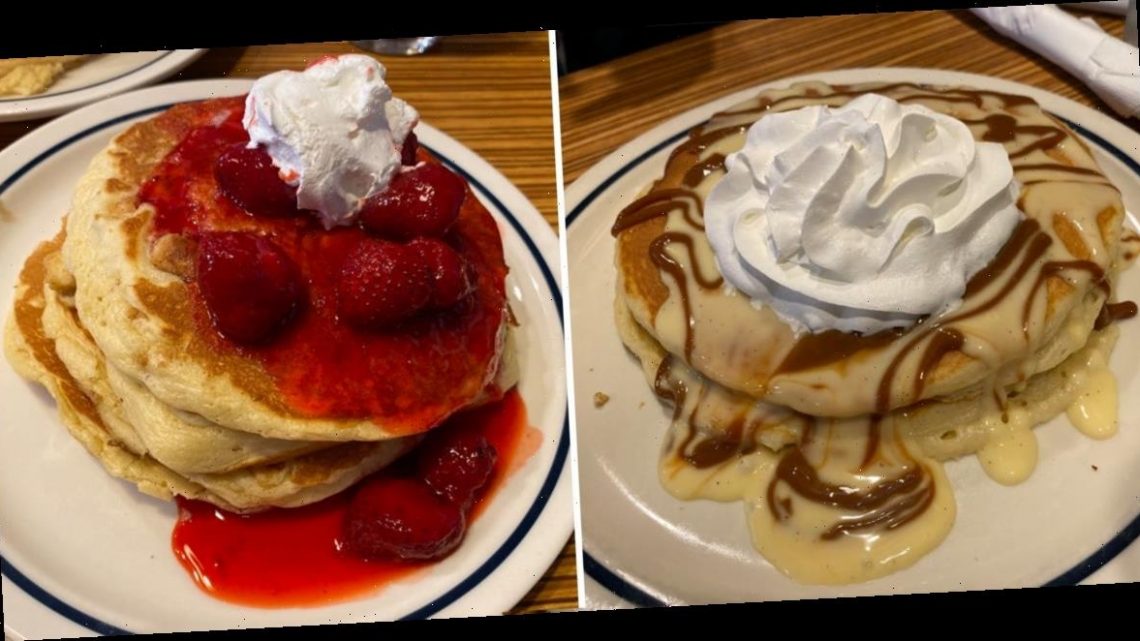 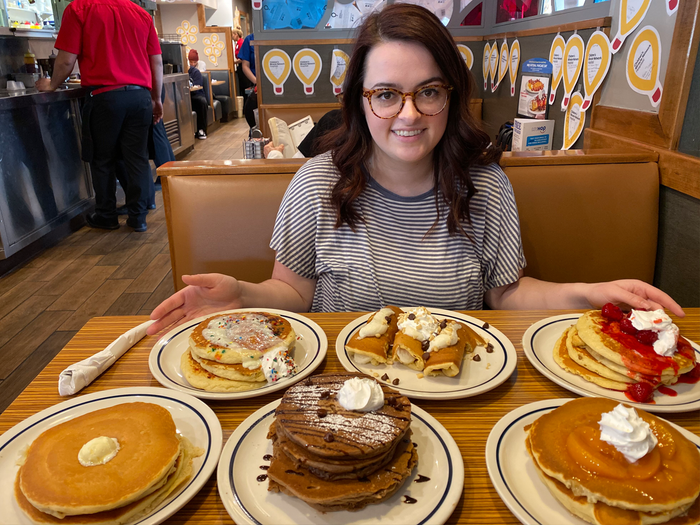 Although it offers plenty of tasty menu items, like omelets, crepes, and burgers, IHOP’s claim to fame is its iconic pancakes.

The diner chain offers so many varieties of stacks that it can sometimes feel overwhelming as you’re trying to decide what to order.

To help narrow down the options, I visited IHOP and tried all of its current pancake menu items, ranking them from my least favorite to my most favorite.

Editor’s Note: This was originally published in February 2020.

I visited two IHOPs and found a total of 12 pancake varieties to try. 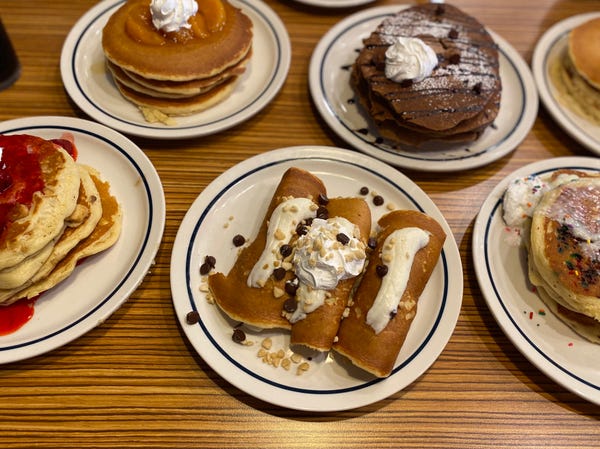 For this taste test, I went to two different IHOP locations — one in Encino, California, and the other in Glendale, California. Across both menus, I found 12 different pancakes to try.

When ordering for this taste test, I did not specify stack size at either location, and was surprised to find that the Encino location gave me full-stacks (four pancakes), and the Glendale location gave me half-stacks (two pancakes) as a default.

Because of this, the prices listed may vary, and it’s important to note that stack size was not factored into my final ranking.

The six half-stacks and six full-stacks (with one of these being labeled a short stack) cost me roughly $90.

Keep scrolling to see how the 12 dishes fared. 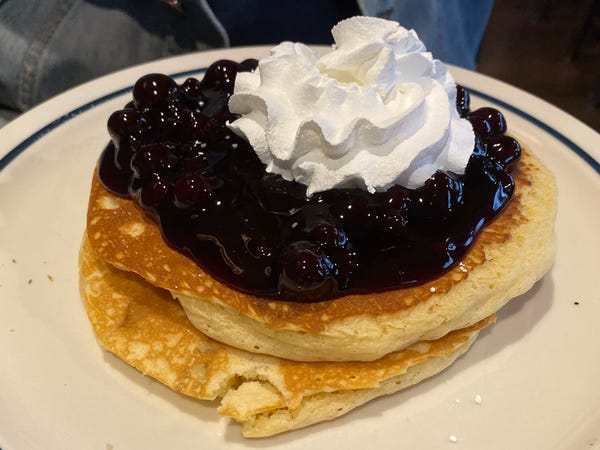 The double-blueberry pancakes arrived to my table in gorgeous form — it looked a lot like a blueberry pie, one of my favorite desserts.

Each berry was beautifully suspended in gelatinous liquid, and there was a heavy helping of perfectly swirled whipped cream on top.

However, once I took a bite of these, I understood how the topping remained in such great shape. The blueberries were served cold, so they quickly cooled down the pancakes and kept everything from melting.

Interestingly, though, there didn’t seem to be tons of blueberries sprinkled throughout the actual pancake batter, which is how this dish is pictured on IHOP’s website. This wasn’t a huge problem for me since my biggest gripe here was that there were way too many blueberries in this dish.

Yes, these pancakes are called double blueberry, but I think the amount of blueberries could have been reduced by at least half, if not more. 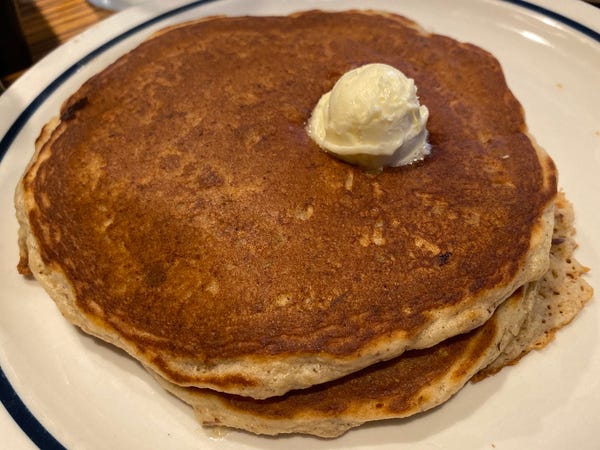 Upon reading the menu description, the Harvest Grain ‘N Nut Pancakes sounded right up my alley. The batter was filled with three things I love: oats, almonds, and walnuts.

Unfortunately, after just one bite I was thrown off by the strange texture of these pancakes.

I knew there’d be some crunch, but that crunchiness embedded into the fluffy pancakes just didn’t work very well, in my opinion.

The stack had a nice flavor, but I found the pancakes to be quite dry. I topped them with one of the fruit syrups from the table caddy (I went with boysenberry) and they tasted much better, but I just couldn’t get past the odd texture. 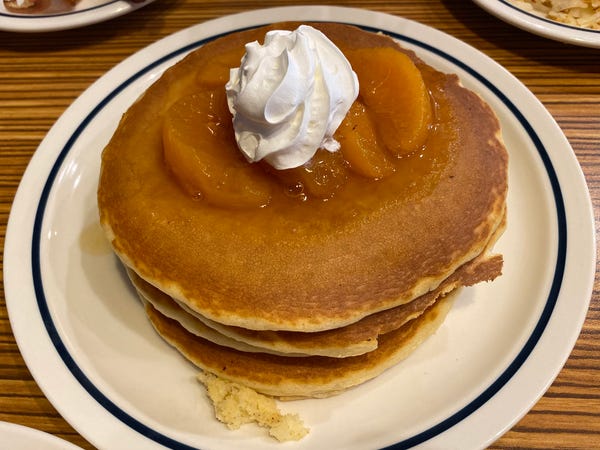 This stack consisted of the original pancakes topped with whipped cream, and what I believe were canned peaches.

These didn’t taste bad, and I completely understand why a chain restaurant might use preserved peaches over fresh, but fresh peaches would have been a delight.

If you enjoy the taste of canned peaches and their syrup, you’ll probably like these pancakes. 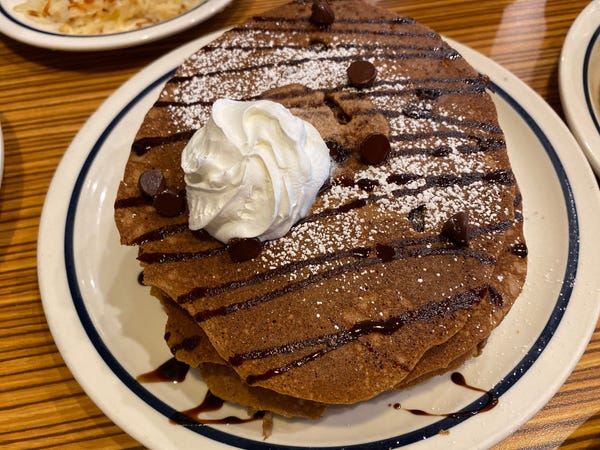 Unfortunately, these pancakes were seriously lacking in chocolate flavor, which surprised me since they were chocolate pancakes filled with bits of chocolate.

The chocolate chips seemed to be the only real source of chocolate flavor, and the pancakes themselves were a bit plain. I also thought this stack was a bit dry, but that’s nothing that some syrup couldn’t fix. 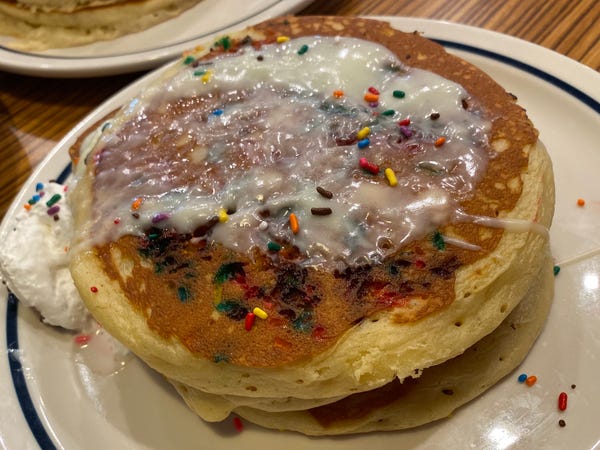 These fun, festive pancakes were a joy to look at and were pretty tasty, too.

The sprinkle-topped and sprinkle-filled pancakes had a birthday-cake flavor and a delicious thin icing, but there wasn’t nearly enough of it.

I think these pancakes tasted a bit strange with syrup (syrup with birthday cake? no thanks), so I would’ve warmly welcomed some extra icing to moisten the stack up. 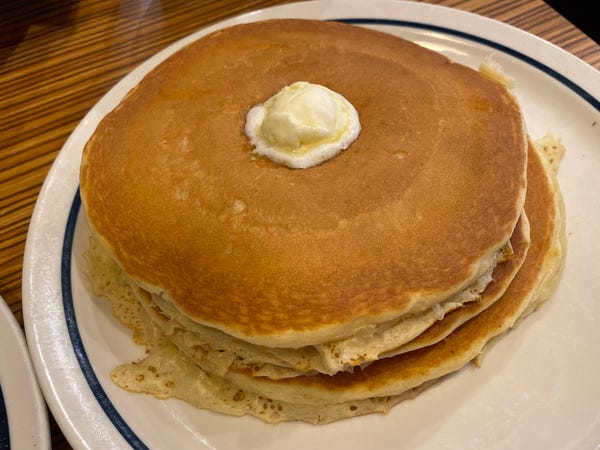 There were no faults in the original stack that brought IHOP to fame, but they just weren’t as delicious as the next six options that were smothered in flavorful toppings.

Still, these light, fluffy pancakes are the base for nearly every other pancake dish on the menu, so they sort of win, right?

I tried them with all of the syrups available, too: boysenberry, strawberry, blueberry, old-fashioned, and butter-pecan.

For a mini ranking within this larger pancake ranking: I loved the boysenberry syrup the most, followed closely by the strawberry. From there, the blueberry was OK, and the old-fashioned and butter-pecan were fine, but less exciting, options. 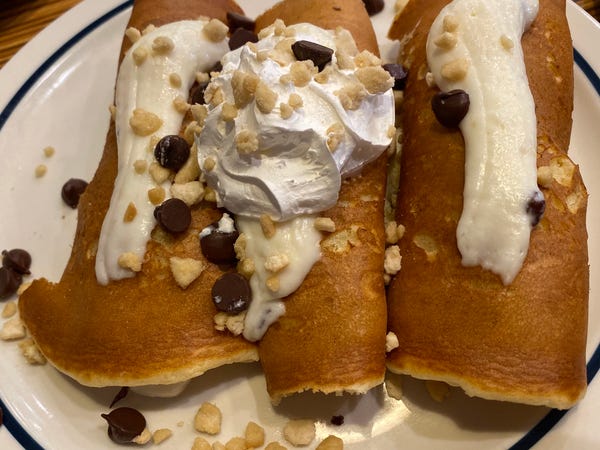 These pancakes launched last spring as a limited-time offer, but are still on the menu, which means they may be a permanent addition.

For this dish, the original pancakes were rolled and stuffed with a sweet ricotta cream and topped with pieces of crunchy cannoli, chocolate chips, more cream, and whipped cream.

If I was judging on presentation alone, the Italian cannoli pancakes would take the crown. I love how the pancakes were arranged to resemble cannoli.

I also enjoyed the variety of texture in this stack — the smooth cream, slightly melted chocolate chips, fluffy pancakes, and crispy cannoli pieces worked together so well.

This dish was very rich though, so it was hard for me to eat much of it in one sitting. 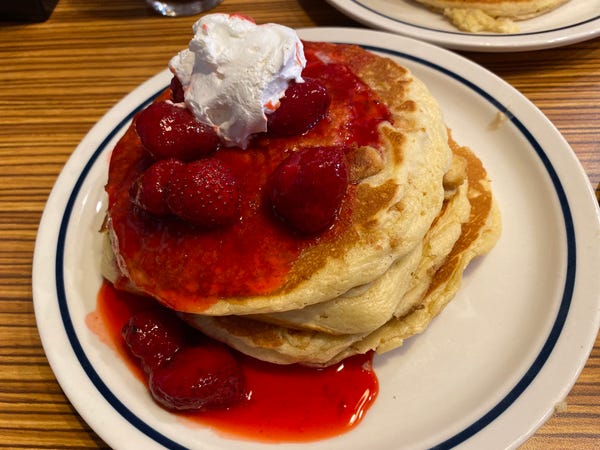 The New York cheesecake pancakes were embedded with pieces of cheesecake and the whole stack was topped with cold, glazed strawberries and whipped cream.

The flavors were delicious and, luckily, the syrup caddies had more strawberry syrup that I could pour on — I wouldn’t have wanted to taint the stack’s flavor with traditional syrup.

These were light, and the contrast of hot pancakes and cold strawberries was pleasant, and not overwhelming like it was with the double-blueberry pancakes.

I think these would have earned a higher spot on my ranking if the pancakes had more creamy cheesecake bits in them and maybe even had a few sprinkled on top.

The strawberries stole the show here, and I think the cheesecake should’ve been front-and-center. 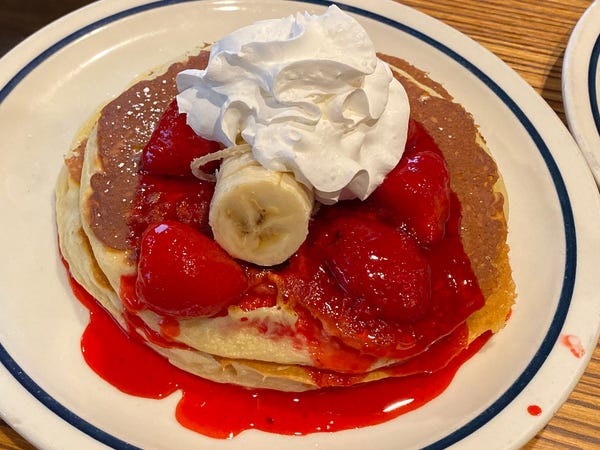 The bananas helped this dish taste refreshing, and the cool temperatures of the strawberries and bananas balanced the hot pancakes.

I recommend topping these with the strawberry syrup for the most impact, as the other syrups might contrast the flavors in a negative way. 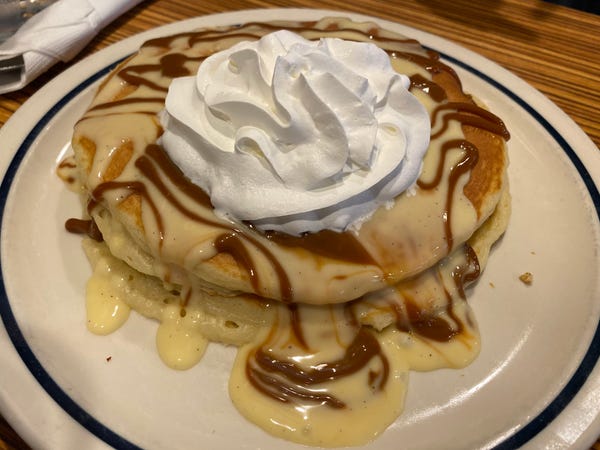 If you are looking for a breakfast that’s masquerading as a dessert, this is it.

These were, by far, the creamiest, most gooey pancake dish on the menu, and the layers of vanilla sauce and dulce de leche meant I didn’t need syrup to moisten this stack.

The texture of the pancakes was pleasant and smooth, and the two sauces meant they was packed with flavor.

This is a decadent option, though, so I couldn’t finish these in one sitting. 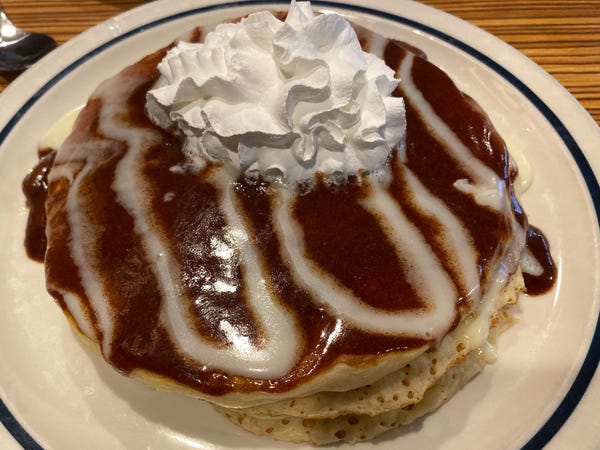 Here’s a little secret — the Cinn-A-Stack Pancakes aren’t technically on the menu of all IHOP locations.

I found them available at the second location I visited, but you can order them even if you don’t see them on the menu (more information on how to do so here).

And I definitely recommend trying to order a stack of these whether they are on the menu or not — they tasted exactly like the delicious center part of a cinnamon roll with their thick, gooey cinnamon spread and drizzle of cream-cheese icing.

I definitely didn’t need to add any syrup on this stack — it was not dry at all and it had all of the flavor I could want. Plus, they were incredibly rich, which makes them great for sharing. 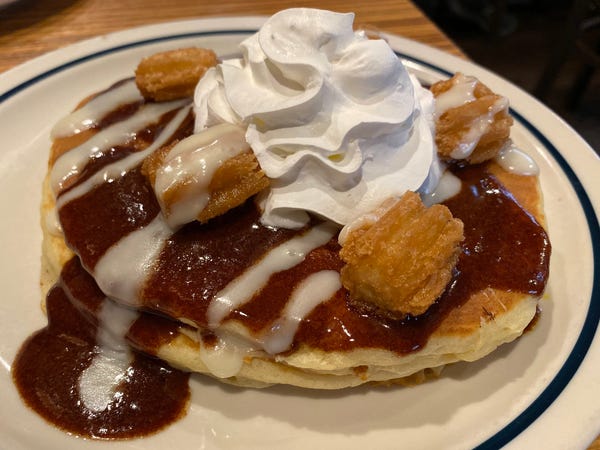 Imagine the Cinn-A-Stack Pancakes, or the middle of a warm cinnamon roll, topped with bite-sized churros, and you have the churro pancakes.

For me, the churros elevated the fan-favorite Cinn-A-Stack Pancakes to the top spot — after all, the addition of the fried dough bits are the only big difference between the two.

The pancakes were sweet and creamy, and the fried churros brought a nice crunch to the dish.

Notably, these were listed on the menu as a limited-time offer, so you might want to pop over to your nearest IHOP and enjoy them before they are gone, because they really are delicious.