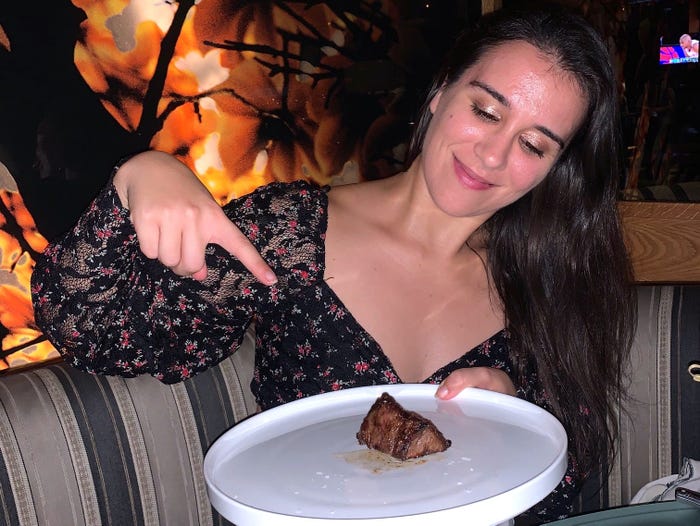 I must confess, when I first heard about BOA Steakhouse I didn't exactly have the highest of expectations.

The West Hollywood restaurant recently made headlines in The New York Times, which proclaimed that it was the place where "influencers go to see and be seen." BOA has become a favorite among TikTok stars like Bryce Hall and Charli D'Amelio, and a background fixture on The Hollywood Fix — Gen Z's go-to gossip YouTube channel.

I had to see what all the hype was about, but I didn't expect an LA hot spot to actually whip up decent food. I figured BOA would be all about the scene, the stars, and the valet lined with fancy cars. So imagine my surprise when I ended up eating the best steak of my life.

Before we get to the steak, let me tell you just a little more about BOA — and it's rise to influencer fame. 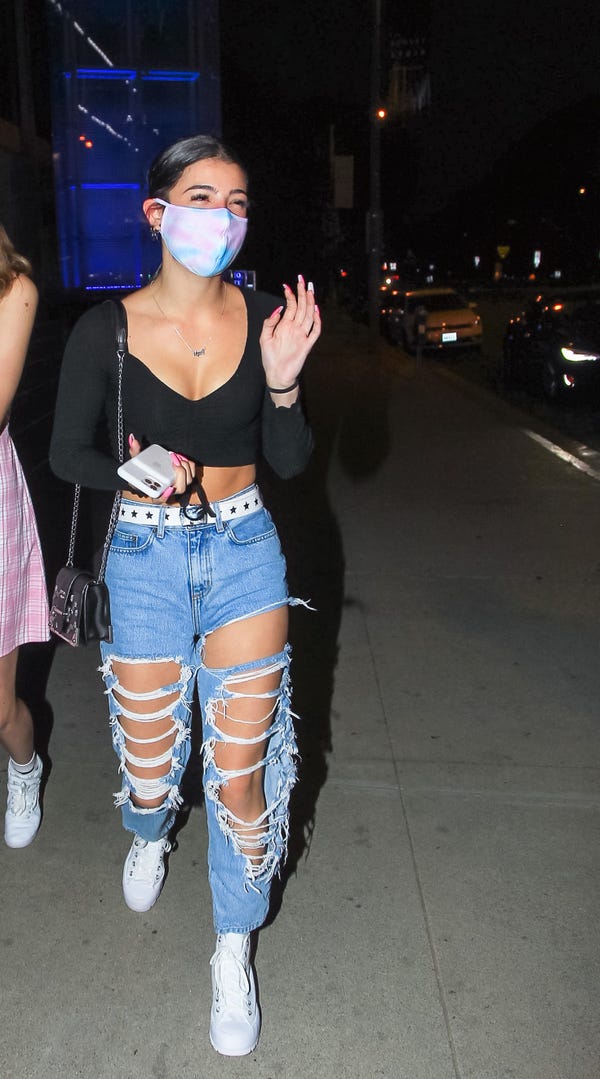 BOA Steakhouse has actually been on the scene for two decades, but its reputation as an influencer hangout is far more recent.

And the credit for its recent fame likely goes to Paul Antosca, who has been BOA's manager since 2018.

When I met Antosca before my dinner, he told me that there are influencers dining at BOA every single night of the week. Turning the restaurant into a hot spot for TikTok stars sounded like a genius marketing plan, but Antosca said that had never been his goal.

"For me, every guest is the same," he added. "Hospitality is in my blood, I find ways to make everyone's days. It's truly about taking care of every guest, and giving an over-the-top BOA Steakhouse experience."

It was Antosca's inate ability to make everyone feel like they're on the A-list that caught the attention of The Hype House — one of TikTok's most influential collectives — a few months ago. Once they were hooked, it wasn't long before other big names with major social-media fame began to follow.

But was the food inside BOA actually any good? I was on a mission to find out.

I thought the front of BOA would be packed with TikTok fans. But when I pulled up for dinner, it was completely quiet. 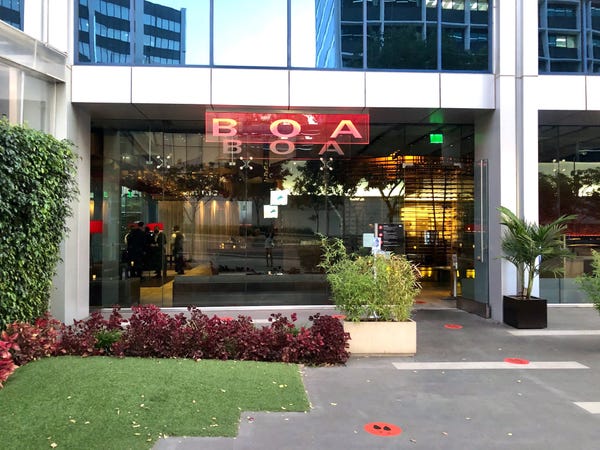 BOA sits underneath an otherwise nondescript office building on Sunset Boulevard, marked only by a neon-red sign and some perfectly groomed shrubs.

While there were red markers on the ground to help people line up in a socially-distant fashion, no one was really around. There was a Porsche driving away from the valet, and a diner here and there trickling through the front door in sky-high heels. But the vibe was already markedly different from fellow Hollywood hot spots like Delilah, which my friend Jessica drove by the night after our dinner at BOA.

"They have a big a– tent and mood lighting in their parking lot," she texted me. "It's CRAZY, and there's a line to get in."

Already I started to wonder if I had been a little too quick to judge BOA by its cover.

The scent of steak was the first thing I noticed as I walked through the restaurant to reach BOA's large backyard patio. 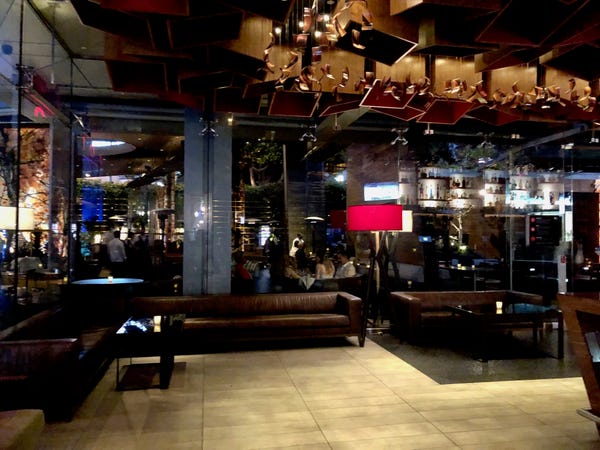 That smell, so heavy in the air, took me back to the time I visited Peter Luger — a steakhouse with a very different vibe in Brooklyn, New York.

A waiter handed us menus, but we already knew that we had to get the Snow Beef Wagyu – an influencer favorite. 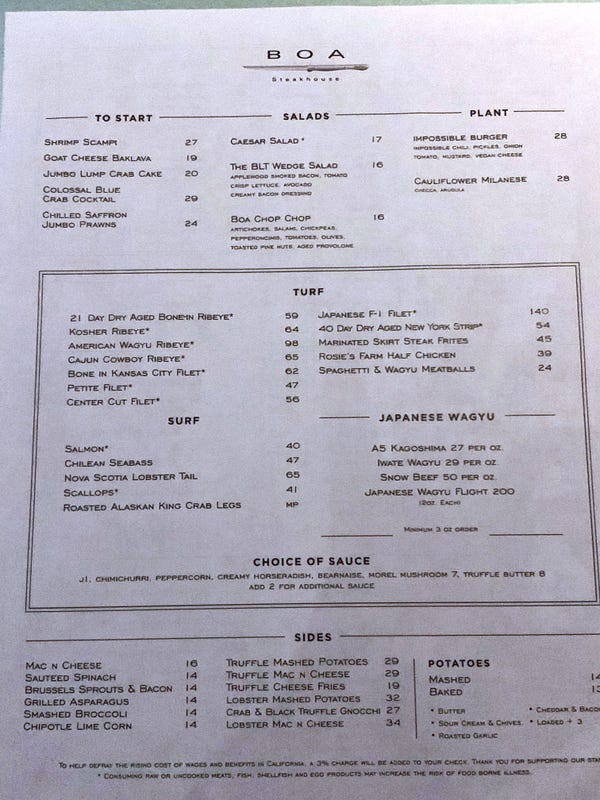 Antosca told me that nearly ever social-media star who walks through his doors orders the Snow Beef Wagyu — which starts at a whopping $150.

"It's a very exclusive item, and ties into being fancy to a lot of the influencers," he added. "They feel like they're high rolling."

The waiter told us that influencers also favor the $34 lobster mac and cheese and the $29 truffle mashed potatoes, so Jessica and I ordered them as well. Clearly it pays to make it big on TikTok.

I was surprised, though, that there were actually a number of affordable options on the menu. Many of BOA's steaks range from $50-70, and the majority of its sides are under $20. 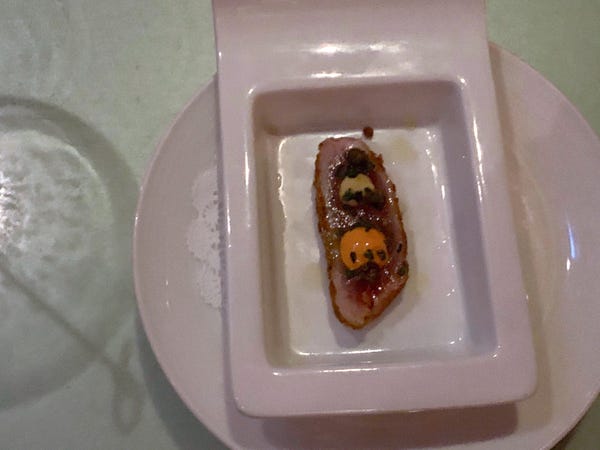 Antosca told us that Chef Travis Flood tries to get out of the kitchen every hour so he can chat with BOA's diners.

And the yellowfin tuna, which was dotted with two different types of aioli, was a delicous pregame to dinner. The yellow aioli was buttery and smooth —reminiscent of a hollandaise sauce — while the orange aioli had a spicy kick.

"It's very refreshing," Jessica said. "There's a lot of flavor."

When the Snow Beef Wagyu came to our table, I couldn't help but feel a little underwhelmed — at first. 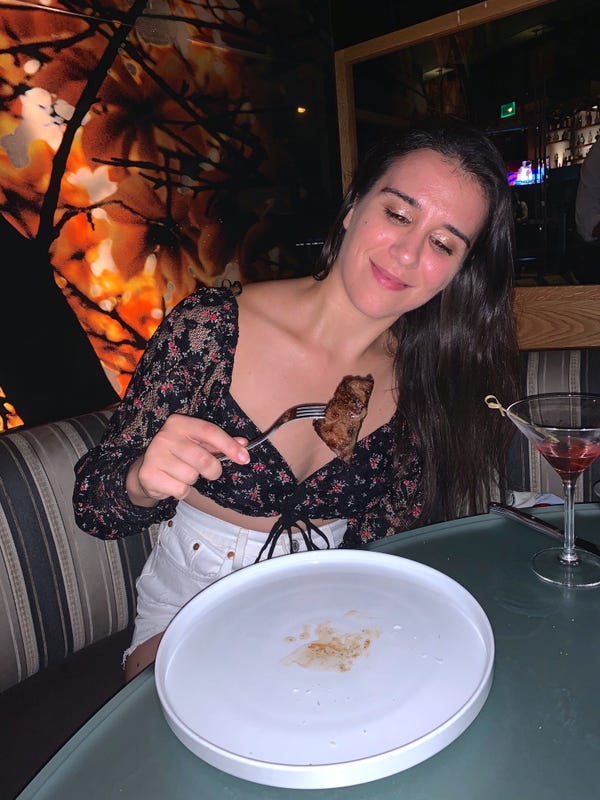 Due to my budget, I could only get three ounces of the Snow Beef Wagyu — the minimum you're allowed to order at BOA. But I didn't fully grasp just how small it would be until I saw the steak directly in front of me. This is clearly a problem that Bryce Hall never has…

But Antosca was confident that this was a steak experience I would never forget.

"I have a 100% feedback rate of guests saying it's the best steak they've ever tasted," he told me. "Only two cattle are harvested each month to ensure it's the highest quality of beef to uphold. It literally melts in your mouth."

While BOA's Snow Beef Wagyu was small in size, it packed a surprising amount of flavor. 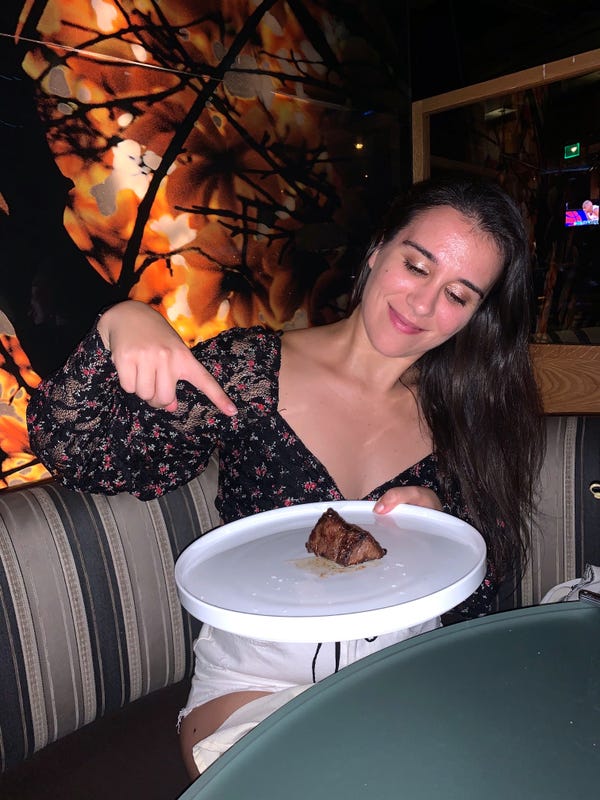 Antosca's 100% feedback rate remained intact that night. Jessica and I couldn't stop gushing about how the Snow Beef Wagyu was the best steak we'd ever tasted.

I barely had a chance to start chewing before the steak almost dissolved in my mouth, it was that soft and juicy. There was a subtle char to the edge that gave each bite a great crisp. And the flavor was so rich and decadent, Jessica said she almost felt naughty eating it.

"If you're on your deathbed and had one last bite, it has to be this," she added.

The next day, Jessica told me she was still dreaming of those few bites of steak.

"MELTING CRISPY BUTTERY," one of her texts exclaimed.

And we were delighted to find that BOA's side dishes were also packed with delicious flavors. 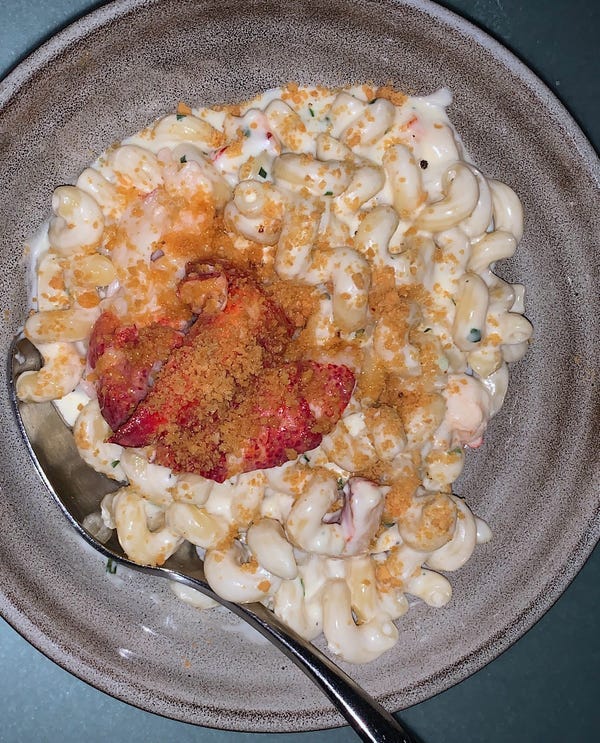 We especially loved the lobster mac and cheese, which nailed the balancing act of being comforting and creamy without feeling too heavy. Plus the soft lobster on top was cooked to perfection.

The dish was only made better by some of the Snow Beef Wagyu's leftover barbecue sauce, which I drizzled on top.

I was surprised by how much I loved the food at BOA — and how much care the steakhouse put into it. 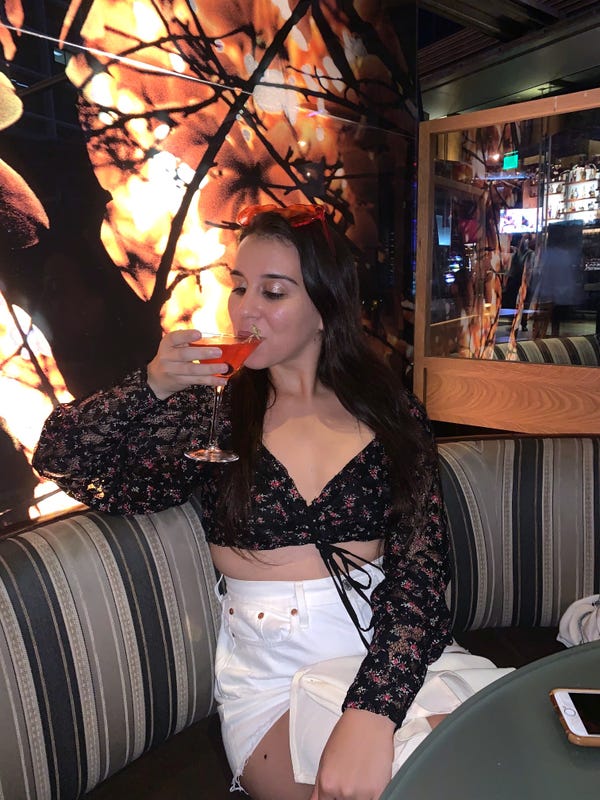 Jessica, who has lived in LA for the last eight years and been to various Hollywood hot spots, confirmed that this hasn't been her experience at other star-studded restaurants. She recalled a birthday party she had once gone to at Delilah, where the guests had to split subpar slices of pizza along with their bottle service.

"When I have friends who come into town I'm like, 'Do you actually want good food or is it just about the vibe?'" she said. "BOA actually gives both, which is hard to find in LA."

And BOA has made it clear that its goal is to make everyone feel at home — not just the influencers. 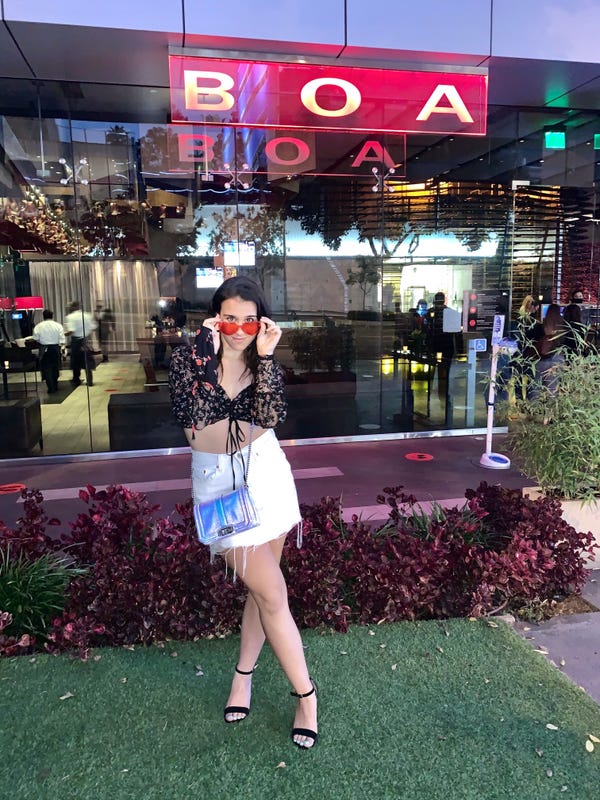 BOA has a policy against comping meals,  no matter how high your follower count is. And the restaurant doesn't allow diners to take photos of other tables.

"You'd be surprised by how many guests we have inside that have been coming for years," Antosca told me. " They don't have the platform to display it, but we treat them just the same."

With no flashing cameras or fans disturbing anyone's dinner, Jessica and I found it impossible to discern who among us was actually famous. Without that distraction, all there was left to focus on was the food.

And, thankfully, it was so very good.