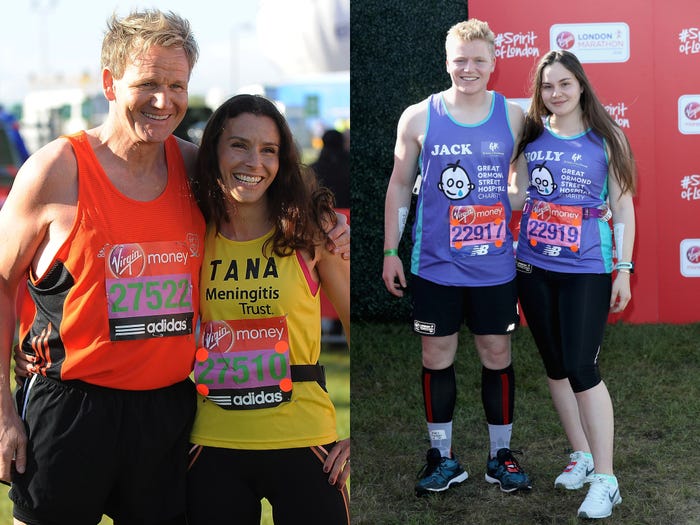 "I'm very lucky that I can train and still eat pretty much what I want," Ramsay told Men's Health UK in an interview.

And what he wants definitely doesn't include protein bars. "How can a chef get into protein bars and say they taste delicious when they taste f—— disgusting?" he told the magazine.

The Michelin-starred chef is well aware that protein intake is key during intensive training, but he seems to prefer getting it from other sources instead of pre-packaged bars. Ramsay told The Telegraph in 2015 that it's not so much about training your body as it is nourishing it properly.

"Fuel is so important," he told The Telegraph. "Everyone thinks the more you train, the less you eat, but not so." He said that his own personal fitness fueling schedule fits in well with his lifestyle as a chef. "I don't have breakfast, lunch, and dinner," he said. "I eat five times a day — small portions."

Ramsay has become something of a fitness icon in recent years

Ramsay is known around Cornwall (where he has a country home) for his long bike rides and has been seen celebrating at the finish line of marathons and Ironman races with his family.

Ramsay revealed that Tana is coming up on her 10th marathon, while he's approaching his 15th in London alone.

And it was actually Tana who got Ramsay into the fit life to begin with.

The chef told the Daily Mail in 2018 that he felt he had two options: lose some weight or lose his wife. "It was painful," Ramsay told Daily Mail, talking about a time when Tana told him he was overweight. "I used to look at myself in the mirror and think, 'Holy s—!' So it was a big wake-up call."

He also wanted to be healthier to try and avoid a premature death, since his own father died at age 53.

Ramsay ran his first London marathon in 2000, according to the Daily Mail, and has been on a structured workout regimen ever since.

The chef told Men's Health UK that he has two upcoming marathons in Los Angeles planned followed by five "ultras," which are races longer than 42 kilometers. Ultramarathon trail lengths typically fall between 50 and over 4,000 kilometers, according to Business Insider, with many around the 100-kilometer mark.

You can read Men's Health UK's full interview with Ramsay in the December issue, on sale from November 24.