Are you a culprit of food waste? Do you rifle through fruit in the supermarket in search of the ‘best-looking’ pieces? This Morning’s consumer expert Alice Beer revealed not all mouldy food is bad, and there are some ‘gone-off’ items that are safe to eat.

The UK throws away around 9.5 million tonnes of food waste in a single year – even though 8.4 million people are in food poverty, Business Waste revealed at the beginning of the year.

A lot of the food that gets binned is because it is past its best, sometimes with evidence of mould.

But, there are some items you can eat, even if you cut the mould off.

Alice said: “We’re very used to perfect food in our country, we’re used to going to the supermarket, putting our hand to the back [of a shelf] and pulling out an item with a week’s shelf life. 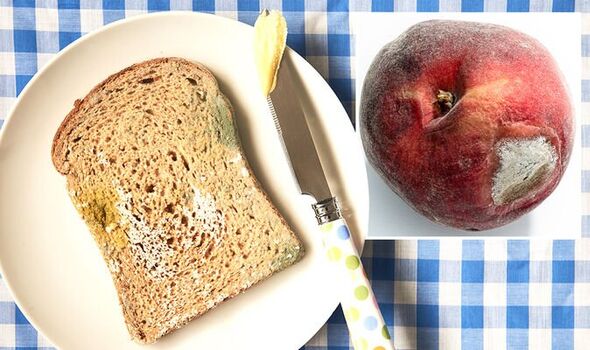 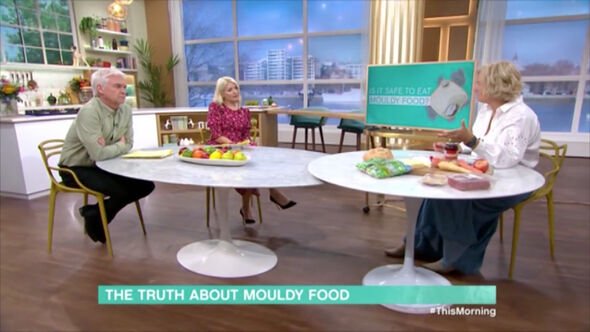 “We’re not getting that at the moment, there are gaps on the shelves and things don’t have the shelf life they used to, things are going off.

“Our bag of salad, we’d normally leave in the fridge for a few days, day two and it’s suddenly gone.

“Fruits, are you finding – raspberries never lasted long anyway, but 24 hours after buying and they’re gone?

“What we have in our fridge, is food that doesn’t quite look as perfect as we’re used to. But the thing to remember, what mould, and bacteria need to survive, it’s need moisture, warmth and air, and if something already has a high moisture content, then it’s going to get mould on it quicker and it’s going to spread through it quickly.”

Soft cheese – If there’s mould on one area or the outside, don’t chop or scrape it off and eat it, “the mould has probably grown through it” Alice said. It’s best to bin it.

Blue cheese – Made with mould, and edible but only because mould is used in the food process, similarly to salami and other cured meats. Safe to eat.

Hard cheese – “Mould on the outside of a hard cheese like cheddar or parmesan, then you’re ok to chop it off,” Alice explained. “They say cut around an inch, I just cut what I can see. The mould won’t have grown much without you being able to see it.”

Fruit and veg – Little spots of mould can usually be salvaged – as long as they’re not slimy, as this signals the presence of bacteria that can cause food poisoning or stomach pain. Cutting around and below mould spots on firm veg such as root veg and cabbages should make them safe to eat. Their low moisture content and often higher acid levels make it harder for the mould to penetrate.

Apples – be wary as a toxin called patulin can be found in damaged or mouldy apples.

Soft fruits and veg like cucumbers, tomatoes, peaches – “You’re not going to be able to see where the mould has got in, throw it away,” Alice advised. “If there’s a tiny bit on the outside, no I wouldn’t pick that off and eat it, because you don’t know the invisible mould in there – but one mouldy raspberry is not going to harm you.” 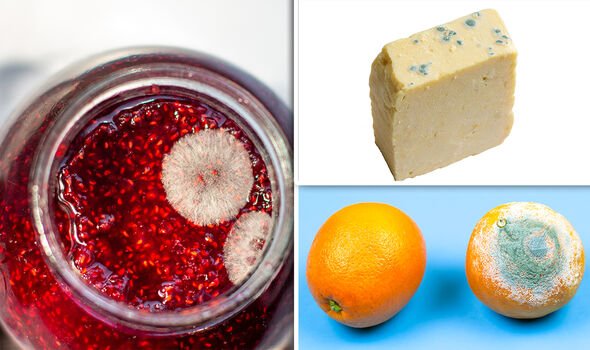 Bag of salad – “If you open it and its gone slightly moist and wet, it’s not appetising for a start, you’re not going to eat it,” Alice said.

Mince or ground meat – “If this has mould on it – you’re not going to eat it, and because it’s been processed, it will go off [mouldy] much more quickly than we’re used to,” Alice explained. Bin it.

Meats – “You’re not going to take a risk with,” the expert added. Bin it.

Potatoes – “If it’s started to sprout, that’s fine, take the sprout off,” she continued. “If it’s green, that’s got natural toxins in it, you don’t want to ingest many of them so probably not green potatoes.”

Bread – “I would cut the mouldy bit off and eat it. It’s not going to do you any harm,” Alice explained. The FSA advises against salvaging mouldy bread, as porous food can be contaminated below the surface. As a general rule, mould of 1cm in diameter on the surface has penetrated 1cm deep into the food.

Jam – Mould on top of jam in a jar, just “scrape the mould off the top of jam”. Alice did say how “the experts say ‘no don’t do it’, but I would.” The FSA warns that “while it is possible that removing the mould and a significant amount of the surrounding product could remove any unseen toxins that are present, there is no guarantee that doing so would remove them all”.

As for whether it can hurt you to eat it, Alice said “yes it can, especially if you can’t see it. Too much of any kind of mould, if you think about mould, it’s going to cause you high grade or low-grade food poisoning”.

Mould expert Dr Patrick Hickey insists fungi plays a key role in improving the taste, texture and nutritional value of what we eat, and can make it easier to digest. “Without fungi, beer and pizza wouldn’t exist”, he pointed out to BBC Food.

While it’s rare for humans to get acutely poisoned, Dr Hickey says there’s relatively little known about the long-term effects of ingesting small amounts of fungal toxins [mould], warning “there’s concern that if consumed repeatedly, mycotoxins may cause cumulative effects and lead to illness”.

The Food Standards Agency (FSA) advises against eating any food containing mould, emphasising that this is especially important for vulnerable groups such as children, the elderly, pregnant women and people with a weakened immune system. Dr Hickey says some food can be salvaged, “but do so at your own risk”. If you’re unsure, don’t eat it.

One way to reduce the risk of mould is by storing food correctly.

Anyone expecting an apology from Scott Morrison should look to history