For her third World Cup, Francisca Ordega wanted to stand out. She had worn her hair in dreadlocks for her first and had a wavy, blonde ponytail for the second, but this time she wanted something bolder.

“I was looking for green and white,” she said about her search for hair extensions in the colors of her native Nigeria. “But then I saw the blue and purple — and I had to have them.” She expedited an order all the way from the United States and braided the colorful strands into her hair herself.

But after the team’s 3-0 loss to Norway in their opening game, Ordega logged on to Twitter to find that people were blaming the defeat on her makeup, nails and long hair — it didn’t “make her run well,” one user wrote.

Some watching the World Cup seem perplexed that athleticism and femininity could coexist — Is Alex Morgan wearing makeup? Were Sydney Leroux’s eyelashes fake? — or in Ordega’s case, they were irritated. It’s grounded in antiquated notions of how women, and specifically female athletes, should present themselves — strong but not too strong, athletic yet feminine, feminine but not so feminine that they would wear lipstick. 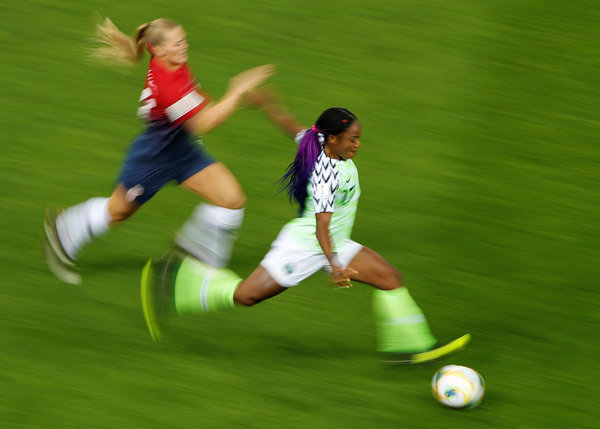 It’s an impossible space for female athletes to navigate, and one that many of this year’s Women’s World Cup players are outright rejecting.

“For the first time in our history, we have a critical mass of girls and women who play sports,” said Mary Jo Kane, the director of the Tucker Center for Research on Girls and Women in Sport at the University of Minnesota. “And they finally have a sense of entitlement to playing sports, and they’re starting to embrace that in a nonapologetic way.”

For so long, the visual narrative around women in sports has been “pretty in pink,” said Kane, as the leagues and organizations in charge of women’s sports worked to portray female athletes as ladylike so as to make their athleticism more palatable. Skirted uniforms — impractical for sliding into bases or making tackles — have been part of women’s sports across eras. The All-American Girls Professional Baseball League had them in the 1940s, and in 2009, the now-defunct Women’s Professional Soccer league introduced optional wrap skirts.

“At a time when women were penetrating this all-male sacred space, it made their participation less threatening,” Kane said of the decades following Title IX, the federal law preventing sex discrimination in educational activities like sports. “It was a way to say, ‘Don’t worry — even though they’re strong, powerful and athletic, they’re still feminine.’ ”

Perhaps no one has stood out more this tournament than Shanice van de Sanden, the speedy Netherlands forward whose leopard-print buzz cut is a work of art. Van de Sanden also wears red lipstick when she plays — specifically Maybelline’s Cherry Chic shade — and solid black eyeliner. “I will never play any game without my lipstick,” she said. “It’s what makes me feel the most comfortable.”

Many other female athletes have said the same of wearing makeup — that it helps them feel more at ease or more confident, and that’s important for their on-field performance. The Olympic sprinter Florence Griffith Joyner, known as Flo-Jo, was one of the first female athletes to talk candidly about this connection, saying: “Dress good to look good. Look good to feel good. And feel good to run fast!”

Cosmetics companies have taken note, making sweat-proof eyeliner and other products for active women. In her Cover Girl ad, Massy Arias — a personal trainer and health coach — runs, crunches and lifts. The spot highlights her muscles and mascara. At the end, she poses a question to naysayers: “What, you don’t wear makeup to work?”

Van de Sanden said she started applying makeup before games a few years ago, a ritual she adopted after getting a buzz cut. She said more people cared about her lipstick than her lack of hair. “Some people said, ‘Oh, that’s weird,’ or laughed about it,” she said. “But I don’t care. I know a lot of people like it too.”

South Korea’s Cho So-hyun — who told me she’s been wearing a “burgundy-orange” shade of lipstick for this World Cup — said she did so to feel more feminine. “I want to show my beauty to everyone, and that I am a woman,” she wrote via text message. Marta, the Brazilian forward who scored her 17th goal in a World Cup on Tuesday — the most of any player, male or female — did so in a dark purple lipstick.

For some players, the decision to wear makeup or dye their hair may not be about wanting to appear more or less feminine — it may be a way for them to stand out or promote their personal brand.

Just like male athletes, these women are engaging in self-packaging as a branding method. The Women’s World Cup is one of the rare moments when the world is actually paying attention, and it’s a huge opportunity for these players to land sponsorships and compete financially. Many of them are making real moves.

“Seeing these elite female athletes have the opportunity to present themselves as they want to be seen is really empowering,” said Vikki Krane, a sports psychologist at Bowling Green State University whose research focuses on gender and sexuality. “If they’re using the little bit of attention and power they have to get themselves noticed — as long as it’s their choice — then they should have the space to be able to do it.”

Despite the progress, Krane said the choices for female athletes are still very constrained. If players choose to forgo makeup or wear their hair short, ignoring conventional notions of femininity, they’re often labeled boyish or masculine. And if they do decide to put on makeup or wear colorful ponytails, they are ridiculed for that too.

It’s indicative of the larger panic around female athletes, who upset traditional views on gender. As of last month, Caster Semenya, the two-time Olympic 800-meter champion from South Africa, was ordered to lower her testosterone levels to run in major competitions. The governing body of track sports described her as one of a group of “biologically male athletes with female gender identities.” Semenya described her experience of trying to accommodate their medical interventions as being a “lab rat” and said their description “hurts more than I can put in words.”

“It’s the same guys who come for you,” Ordega said of those who criticize her appearance. “They say, ‘Oh you’re a woman putting on trousers? You cut your hair short?’ You look like a guy.’ But if you try to look different — to show a feminine side — they still complain!”

The self-representation of female athletes is especially important, Kane said, because for so long the only way for female athletes to promote themselves was to be “hyper-heterosexual” — often nude and posing for the male gaze. The Australian women’s national team once sold a nude calendar, and in 2011, members of the French team posed topless alongside a caption that read, “Is this how we should show up before you come to our games?”

The issue of how female athletes should or should not look affects women from all over the world. In our survey of 108 Women’s World Cup players spanning 17 countries, they lamented about their muscular physiques and being mistaken for men.

For van de Sanden, the lipstick and the hair are not just visual trademarks — they are a way for her to express some of her personality outside of soccer. “I really love to play football,” she said. “But I also really enjoy looking good — to have nice makeup on, to have nice outfits — that means something to me too.”

Asked about any players whose style she envied, Ordega immediately said van de Sanden. “The first day I saw her hair I was like, ‘Wow, I wish I could have this!’”

On Monday night, Nigeria lost 1-0 to France. Ordega had taken out her purple braids, and instead wore her hair in two small buns. I asked if her she had switched her style because of the complaints she had received.

“Nah, I needed something new. In fact, I want them to talk more,” she texted me, saying that she was bored of having the same look for all three group games. “If we qualify for the next round, I will have something different then as well.”

Casio G-Shock collaboration watches sell out in seconds and minutes

The ups and downs of a legendary publishing house
Entertainment