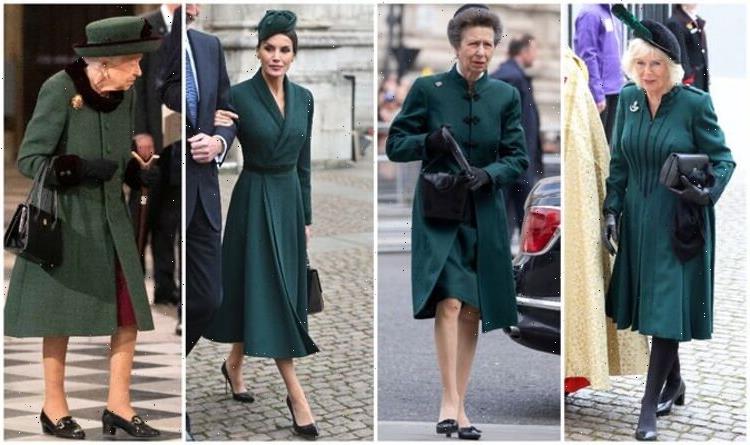 On March 29, the Royal Family gathered at Westminster Abbey to celebrate a memorial service in honour of the late Prince Philip who died last year. Many royals showed up in a certain colour – including monarchs from European countries and members of Philip’s immediate family. This colour was green, which is synonymous with the late royal.

The service featured several special touches, including music selected by Philip before his passing.

There were also floral arrangements inspired by his and Queen Elizabeth’s wedding day flowers.

The monarch also honoured her late husband during her first public outing in five months by wearing an outfit done entirely in the shade of ‘Edinburgh Green’.

This was done also by several other attendees, including her daughter Princess Anne, Queen Letizia of Spain and Prince Charles’s wife, Camilla, the Duchess of Cornwall.

This particular green is the colour of Prince Philip’s official livery and was used for a wide array of things related to him.

It was even the shade of the Land Rover that was used to carry his coffin at his funeral last year.

The Queen also accessorized her outfit with a special brooch that is believed to have been a gift from Prince Philip.

Anthony French, a diamond expert at Austen & Blake spoke to Express.co.uk outlining the details of this special brooch.

He said: “The 2018 broadcast of the Christmas Speech saw the Queen wear a sentimental piece, the Scarab Brooch.

“This was gifted to her by her husband, Prince Phillip, in 1966.

“The brooch, designed by Andrew Grima, is crafted in yellow gold and features carved ruby and diamond embellishments.

“The Queen has worn this special piece on many occasions, and for an estimated price tag of £10,000, she is definitely getting her money’s worth.”

The royal was joined at the service by several other members of the Royal Family, including Prince William and Kate Middleton.

The couple brought their two oldest children, Prince George and Princess Charlotte, to pay tribute to their late great-grandfather.

The Earl and Countess of Wessex appeared with their children, Lady Louise Windsor, and James, Viscount Severn.

Plus, European royals such as Queen Mathilde of Belgium and Queen Margrethe of Denmark all attended to honour Prince Philip’s life of service.

Queen Elizabeth was escorted into the service by her son Prince Andrew.

The Service of Thanksgiving was held for the Duke of Edinburgh to “give thanks for HRH’s dedication to family, Nation and Commonwealth and recognize the importance of his legacy in creating opportunities for young people, promoting environmental stewardship and conservation, and supporting the Armed Forces,” according to the Royal Family’s official Instagram account.

Mental health at work: why you need to start looking for the signs of toxic work relationships