In the normal course of human events, it would have been the biggest show of the fashion season in Milan. Possibly the most anticipated show of the whole season.

Flotillas of black cars would have jammed the streets around the Via Fogazzaro. Throngs of guests and groupies would have pushed en masse toward the doors, the chroniclers of street style running hither and yon around them like a cloud of swarming gnats. The official attendees would have waved their invitations above their heads like little handkerchiefs of surrender, the better to catch the bouncers’s eyes. The air would have hummed with anticipation.

Once inside, there would have been prosecco, probably, and anchovy-and-butter canapés, and smartphones would have lit up the room as the first collection from Miuccia Prada and Raf Simons as co-creative directors at Prada finally appeared.

This being an abnormal course of events, however, none of that occurred.

Instead, because of the pandemic, it was a digital presentation — with a pastel-tinted care package of jams and tea and cookies from the Prada pastry shop, Marchesi, sent to get everyone in the mood — that provided an answer to the questions that had been percolating since the Prada-Simons agreement was announced. 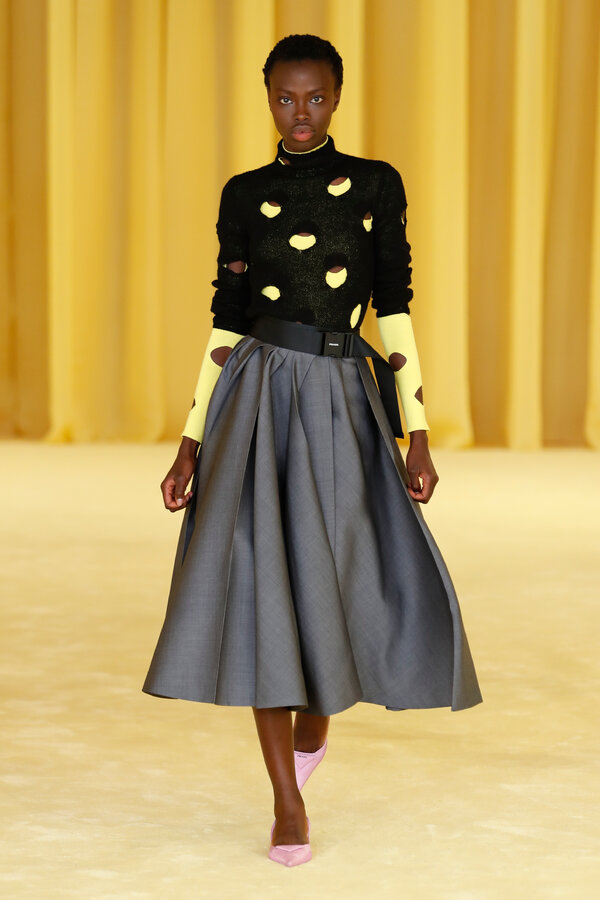 Would the combined force of two of the greatest fashion minds of this particular period, designers who on their own — Mrs. Prada at Prada and Miu Miu, and Mr. Simons at Jil Sander, Dior, Calvin Klein and his own label — have irrevocably shaped the way we dress (the way we think about dress), be greater than the sum of their parts? Or would it be an unmitigated disaster; a clash of egos and ideas that could sink them both?

More than the reputations of both designers and the fortunes of a company were riding on the result. If it worked, the joining of two great creative talents at one brand had the potential to reshape the future of high fashion, in the same way the 1983 decision to install Karl Lagerfeld at Chanel to yank that then-stagnating heritage name into the present gave rise to an entire industry strategy: John Galliano at Dior and now Margiela; Tom Ford at Gucci; and so on.

A qualified yes. What Mr. Simons and Mrs. Prada did with their debut will not upend the industry. They didn’t expose the shibboleths of dress or kick over any sacred cows. They didn’t cleave the history of fashion into then and now.

But they did, pragmatically and with a great deal of grace and forethought, lay the groundwork for a path forward. One that resonated beyond clothes.

Working from the bottom up, they sent out first a series of basics: shell tops that brushed the thighs and matching narrow trousers, clutch coats that circled the body like a hug, made from upcycled nylon (they call it re-nylon; it’s one of Prada’s sustainability initiatives) in black-and-white, shell pink and magenta, polka dots and tiny poesies, to create a pseudo-uniform for the modern age. All of it was branded with an oversize Prada logo triangle at the neck like a stamp of identity.

From there, they built, adding layers of knits and undershirts with polka dots punched into moth holes; full 1950s skirts with utilitarian luggage belts nipping in the waist; sweatshirts and egg-shaped trenches that nodded to both couture and technology. Prints, made by the artist Peter De Potter, referenced both exotic blooms and what looked like packing instructions. Sleeveless satin shifts came with three-dimensional roses sprinkled on top (very fancy polka dots).

It wasn’t quite a return to first principles; more like a renegotiation. One done with great harmony.

The collection was called “Dialogues,” and it was all that. At a time when the world is divided by shouted non-debate, and civil discourse feels like a memory of long ago, Mr. Simons and Mrs. Prada provided proof both of its power and its value as a means of renewal.

Underscoring the idea of a fresh start was the fact that every model in the show was walking for the first time — and for the first time, a series of screens, hung like mobile chandeliers in the empty room where the show was held, displayed the name of each young woman as she appeared: recognition that she was not a hanger, but a human.

There has been a current of personal connection running through the early Milan shows that can be felt even through a computer. It was there, albeit in a heavy-handed way, in Dolce & Gabbana’s patchwork-palooza: 92 trouser and gowns and greatcoats and rompers created by uniting swatches of many colors and many histories.

And it was also there at Fendi, if not at Alberta Ferretti, where music festival-ready hot pants, embroidered macramé tops and big fringe bags felt like an atonal reversion to fashion week norms (the sleeping beauty negligee dresses were more on-point), or at Emporio Armani, where a short film, “Building Dialogues,” squashed the easy separates with arty pretentiousness.

After all, for her last collection as sole designer of the brand, Silvia Fendi began with pasta.

Come February, Kim Jones will take over as the designer of women’s wear, stepping into the place left empty by Karl Lagerfeld’s death last year. Ms. Fendi will continue with men’s wear and accessories, and though they will not have the sort of equal input on everything that Mr. Simons and Mrs. Prada do, there will be a symbiosis, ideally, of sorts.

But first, the pasta. (Despite all the sniping about fashion people never eating, meals play a meaningful part in the industry; it does, after all, have to do with “taste.”) To be specific: two bags of Fendi-shaped pasta, along with a recipe for Ms. Fendi’s grandmother Adele’s lemon pesto pasta. Then came the clothes.

Which were, in fact, related to the food. Ms. Fendi said, via Zoom after the show, that she had spent lockdown thinking about family and history and values; about what we want to keep close, like embroidered linens inherited as part of a trousseau, and what really lasts over time.

That meant tissue-thin voile tunics and shirts for both men and women printed with the view of clouds and sky and trees as seen from her window (complete with window frame); midcentury shapes such as portrait collars on princess coats and fluted 1940s sleeves on skirt suits; mink shaved into lace; and cozy quilted down opera capes that trailed on the floor like super-elegant duvets.

Since Mr. Lagerfeld’s death it has sometimes felt as if the weight of legacy has lain heavy on Ms. Fendi’s work, but these looks conveyed the incredible lightness of memory. The word that came to mind was empathy.

We could all use some of that, wherever it lies.

What you should know before tackling a whitehead
Entertainment